Collaboraction Theatre Company will launch PEACEBOOK at the Goodman Theatre on August 26, followed by tours this fall to Chicago Park Districts in Englewood, Austin and Hermosa.

OVER 200 ARTISTS FROM ALL OVER CHICAGO UNITE IN PEACEBOOK,
A FREE, CITY-WIDE TOURING FESTIVAL OF
PEACE-THEMED
SHORT THEATER, DANCE, MUSIC AND SPOKEN WORD


Each piece is seven minutes or less, and range from solos to large collaborations.

In sum, the 24 "chapters" that comprise PEACEBOOK unite more than 200 artists, from household names to neighborhood peace activists, all intent on creating real connections with Chicagoans in communities around the city.

All three programs are presented free of charge. Free ticket reservations, with an option to donate what you can, will launch Wednesday, July 19 at 10 a.m. To reserve tickets and for more information, visit collaboraction.org/peacebook2017, email boxoffice@collaboraction.org or call Collaboraction, (312) 226-9633. 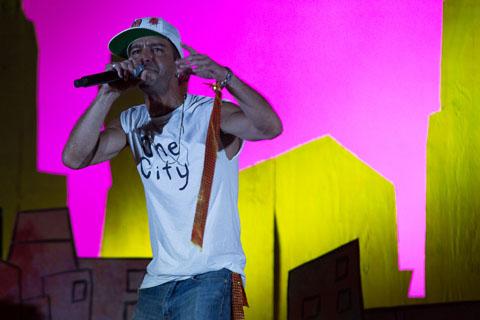 
Following their Goodman debuts, the 24 acts will be divided into three programs of eight works that will tour to these south, west and north side neighborhoods next fall as part of the Chicago Park District's Nights Out in the Parks program: 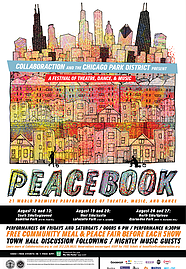 Park performances are free. Each night features a different musical guest. Before every Saturday show is a free community meal and peace fair with panels, workshops and community organizations from a diverse array of Chicago peacemakers.

"In these times of rising homicides and racial tension in Chicago, we believe in the power of theater to incite empathy, knowledge, dialogue and change around peace in Chicago," said Collaboraction Artistic Director Anthony Moseley. "With over 200 artists from all throughout the city and partnerships with the Goodman Theatre and the Chicago Park District, we are establishing PEACEBOOK as a place for our city to come together around this most critical social issue with our future at stake." 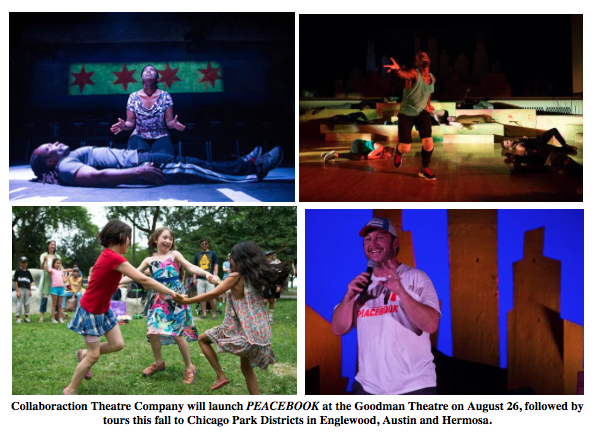 More about the plays:

The following 24 prayers for peace were selected from over 100 submissions of theater, dance and spoken word works, all envisioning a more peaceful Chicago:

Dandelions
by Marsha Estell, directed by Mignon McPherson Stewart
A heartfelt story about loss and how violence and peace are not always mutually exclusive.

#Hashtag Who's Next The Musical
written and directed by Frederick Alphonso
A song that invites us to join/live the justice revolution through facing our constructed narratives around crime.

Hoods
by Kaye Winks, directed by Schoen Smith
The Chicago family, made up of different neighborhoods in the city, sits down for a group art therapy session to talk out their long-established communication problems.

Obama, the Musical
by Yuri Basho Lane, directed by Elizabeth Lovelady
A beat-box musical examining Barack Obama in three stages of his life.

What Do You See?
by Brian Keys, directed by Kristina Valada-Viars
Keys' solo show examines the confrontation between a black man and society that takes us to the core of our prejudices.

Barbarism
by Jason Grote, directed by Iris Sowalt
A woman with PTSD and apocalyptic survivor's guilt takes audiences on an exploration of the gilded cages in her mind as she reveals the fragility of the human spirit.

Eckhart Park Echoes
by Nancy Garcia Loza, directed by Juan Castaneda
A peaceful protest by way of storytelling. Garcia Loza's solo show offers a snapshot of her aunt's life as it unfolded on a Chicago block for forty years in West Town.

Finding a Loving Motherland
devised by Sami Hussain Ismat
A satirical tragi-comedy about a refugee escaping Syria only to encounter ridiculous bureaucratic and racial discrimination, fear of white supremacy in Trump's America, and crime in his new neighborhood.

Recipe for Peace
devised by Dionne Hawkins
Tune into this cooking show where the host prepares the ingredients to create peace, by the artistic director of the Austin Town Hall Theatre Company.

We'll Be Doing This Together
by Ann Kreitman
This non-traditional, interactive theater piece asks the audience to create gentle and joyful connections between strangers.

17 to (New) Life
devised by GQ and Tyrone Taylor
GQ of the Q Brothers and Tyrone Taylor co-create and perform this ritual of healing based on Taylor's real life events, including murder, incarceration, freedom and search for transformation.

Some Thoughts On Race and Racism In Chicago From Some People Who Aren't Sure What To Do And Who Sat Down And Talked About It
by Sarah Illiatovitch-Goldman, directed by Josh Sobel
This piece of verbatim theatre talks about race through white eyes, using words from a collection of interviews that shed light on how we see ourselves and each other as a community.

Dear Masculinity
by Eneale Pickett, directed by Rain Wilson
This play, by a west side native, is a collection of letters written by men to their masculinity.

EmpoWOMENt
devised by Bril Barrett
A team of female dancers proved tap-dance can be an effective form of protest and a powerful catalyst for change in this work choreographed by the acclaimed founder of M.A.D.D. (Making a Difference Dancing).

High and Dry
by Greg Hardigan, directed by Genevieve Fowler
A man has a chance encounter with a woman on the street and must confront his role in creating peace in Chicago.

The High Priestess
devised by Dr. Laura Biagi
Inspired by the two cards of the major Arcana of the Tarot, this performance art piece revolves around the power to give social meaning to sounds and the concept of failing and undoing by meditating on four alphabets: Sanskrit, Arabic, Hebrew and Latin.

Quiet Time
by Erica Mann Ramis, directed by Nat Swift
A woman's thoughts are played out on stage as she meditates in an effort to navigate the maze of her grief after the loss of her husband.

Collaboraction (collaboraction.org) collaborates with artists, community activists, and citizens from throughout the city to create original theatrical experiences that push artistic boundaries and explore critical social issues with a diverse community of Chicagoans. Collaboraction has worked with over 3,000 artists to bring more than 60 productions and events to upwards of 250,000 audience members.

Collaboraction, based on the third floor of Wicker Park's historic Flat Iron Arts Building with three theatre spaces, is led by Artistic Director Anthony Moseley and a dedicated staff and board of directors. Collaboraction is supported by Bloomberg Philanthropies, The Gaylord and Dorothy Donnelley Foundation, Richard H. Driehaus Foundation via the MacArthur Foundation, and the Wicker Park & Bucktown SSA #33 Chamber of Commerce. This program is partially supported by a grant from the Illinois Arts Council Agency.

About Goodman Theatre
America's "Best Regional Theatre" (Time magazine) and "Chicago's flagship resident stage" (Chicago Tribune), Goodman Theatre is a not-for-profit organization distinguished by the quality and scope of its artistic programming and civic engagement. Founded in 1925, the Goodman is led by Robert Falls-"Chicago's most essential director" (Chicago Tribune), who marks 30 years as Artistic Director this season-and Executive Director Roche Schulfer, who is celebrated for his vision and leadership over nearly four decades. Dedicated to new plays, reimagined classics and large-scale musical theater works, Goodman Theatre artists and productions have earned hundreds of awards for artistic excellence, including: two Pulitzer Prizes, 22 Tony Awards, nearly 160 Jeff Awards and more. Over the past three decades, audiences have experienced more than 150 world or American premieres, 30 major musical productions, as well as nationally and internationally celebrated productions of classic works (including Falls' productions of Death of a Salesman, Long Day's Journey into Night, King Lear and The Iceman Cometh, many in collaboration with actor Brian Dennehy). In addition, the Goodman is the first theater in the world to produce all 10 plays in August Wilson's "American Century Cycle." For nearly four decades, the annual holiday tradition of A Christmas Carol has created a new generation of theatergoers.

The 2016 opening of the Alice Rapoport Center for Education and Engagement ("the Alice") launched the next phase in the Goodman's decades-long commitment as an arts and community organization dedicated to educating Chicago youth and promoting lifelong learning. Programs are offered year-round and free of charge. Eighty-five percent of the Goodman's youth program participants come from underserved communities.
Visit the Goodman virtually at GoodmanTheatre.org-including OnStage+ for insider information - and on Twitter (@GoodmanTheatre), Facebook and Instagram.