Here at ChiIL Mama, my kids are past preschool, but many of our readers are still in those early years. So we're still more than happy to review and recommend educational apps, toys, books and gear that help grow little brains and keep toddler moms sane. My kids were Montessori educated from the age of 3 up and it's an awesome method! Check out these apps to give your littles a head start with a Montessori twist. We had a chance to review the 3 early childhood apps below and recommend all 3, especially the Montessori Math. 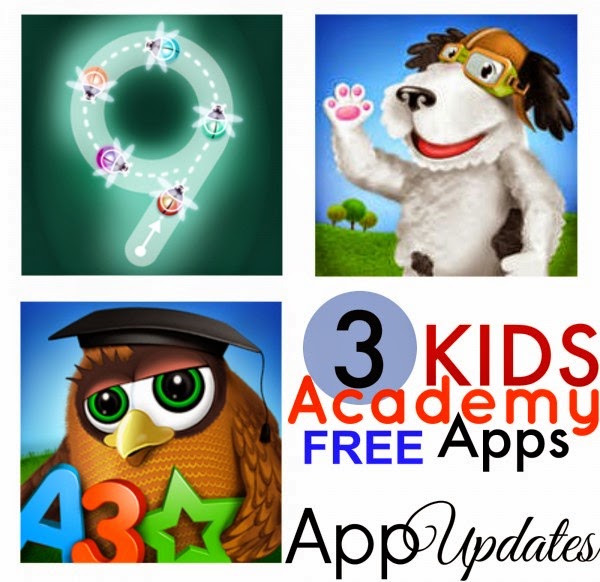 Disclosure: We were compensated to download, review, and share with our readers. As always, all opinions are our own.

Free for a limited time!

New updates are out for Kids Academy apps. It is never too early to start learning and Kids Academy has made it easy AND fun with these apps!

*ChiIL out, Mama. No guilt. Sometime your littles just need to be a little entertained so you can get stuff done or make it through a drive, errands or waiting. Though this app has been released for a while, they've added Cinderella and Red Riding Hood! Kids Academy apps are a great choice that both entertains and educates!

With over 500k installs and an average rating of 4.5 stars on the App Store the app is designed to develop early preschool reading skills, enrich kids’ vocabulary and help with cognitive pattern recognition. Now with the new update ‘baby books’, which was already an impressive collection of classic fairy tales, books, songs, and games for the young, has become even better.

The core of the update is the addition of two more classic stories of Cinderella and Little Red Riding Hood that kids and their parents can now enjoy reading and/or listening to. Just like all the other titles in the app, the new books feature original illustrations and professional voice-overs. Along with the new content the update also features navigation improvements for both kids and parent areas of the app as well as some performance optimization.

NOW OUT FOR ANDROID:

*So stoked Montessori based ABC Preschool Games is on Android too. Want waits without meltdowns? Your littles will adore the colorful graphics and friendly characters of Kids Academy apps.

ABC Preschool Games
The app has only recently been launched on Android but it has been a long-time player on Apple’s App Store where ABC Preschool Games is constantly topping the education charts and raking up solid 5 star reviews. With over 2 million downloads on iOS, ABC Preschool Games has earned the love and support of kids, parents, educational experts, and media with the likes of the Guardian featuring the app and giving it high praise.

*This one's our favorite Montessori based Kids Academy app for iPhone, iPad & Android. Get the best of new tech & century old Montessori learning.

Testimonial: Awesome Learning Tool!! My little boy is in pre-k and he loves this app! It has always been difficult to get him engaged in learning, even when it comes to getting to play on the tablet. He is learning how to trace letters and numbers and having fun! A+

123 Tracing
Educational apps for kids are all the rage today, and math games especially. Not only do they grant you hours of happy silence keeping the young busy, but also help kids develop useful skills. So if you’re on the lookout for quality apps for your kids you should by all means get your hands on 123 Tracing by Kids Academy, especially while it’s free.

123 Tracing is a popular series of apps by Kids Academy available for iPhone, iPad, Android devices. Nearing 1 million downloads, 123 Tracing apps are designed to teach kids basic math through a set of fun games. Designed by leading experts in early childhood education the app are based on the proven Montessori approach which lets the kids learn at their own pace and ensures the knowledge and skills will stick. You can create multiple kids’ profiles in the apps when children share same device so they all progress on their own and can always pick up where they left.

Kids Academy develops mobile apps for preschool education. Covering all major platforms their apps are designed to help kids of 5 and under to master all of the preschool educational skills from letters to numbers and vocabulary. Having passed the ten million installs mark, Kids Academy continues to deliver quality apps for iOS, Android and Amazon devices.

This post was created in partnership with Mom Buzz Media. The reviews above are my own opinions and are not influenced in any way.

Posted by Bonnie Kenaz-Mara at 4:14 PM