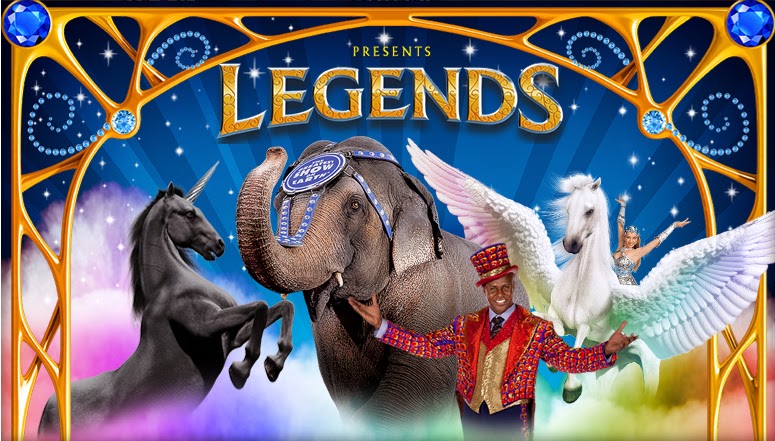 Here at ChiIL Mama we're HUGE fans of the circus arts and we love it when the big shows come to town. This one looks particularly incredible as we're also enamored with mythological beasts! Get your tickets now for this unique melding of circus stars and the creatures of legends. We also dig the multicultural flavor that comes from having some of the top performers in the world from 25 different countries all collaborating.
Ringling Bros. and Barnum & Bailey Presents LEGENDS, an all-new edition that unites iconic circus stars with living mythological creatures in a celebration of the LEGENDS that have captured imaginations for centuries, is slated to appear Nov. 6-16 at the Allstate Arena in Rosemont, Ill., and Nov. 19-30 at Chicago’s United Center. Ringmaster Johnathan Lee Iverson guides Paulo the Legend Seeker on his quest to discover real, living legends from around the world and presents Paulo’s fantastic discoveries to circus fans everywhere.
“Ringling Bros. and Barnum & Bailey is where legends live, and we constantly ask our audiences to believe in the unbelievable.  For this edition we’ve combined a number of mythical themes and stories into a lavish production of sight and sound unlike any show we have ever created,” says Producer Nicole Feld.
Mythology meets reality as Paulo encounters the wondrous Pegasus and the amazing Unicorn, as well as circus legends such as big cat presenter Alexander Lacey; the Riders of the Wind Cossack horsemen; and motorcycle daredevils, the Torres Family. They all come together along with a cast spanning 25 countries in a spectacular production.

Experience magnificent Asian elephants, a twenty-acrobat troupe perched atop only a pair of bicycles, and a never-before-seen double-wide, high-flying trapeze act.
“A legend is something so magical and larger than life that once you see it, you never forget it.  The talent in this show is unprecedented and embodies the name LEGENDS,” says Producer Alana Feld.  “My sister and I were speechless when we saw these acts the first time.  We searched the world for the best of the best and put them together in an unforgettable show.” The extraordinary talent that can only be seen at Ringling Bros. Presents LEGENDS includes:

An hour before show time, families can come to the arena floor and participate in interactive, up-close circus experiences, theAll-Access Pre-show and the brand new Ringmaster Zone.

Free to all ticketholders, the All Access Pre-show allows circus fans to learn juggling and balancing skills, meet the performers of The Greatest Show On Earth, get autographs, take photos and enter to win a one-of-a-kind Pachyderm Painting.

For the ultimate circus fan experience, the producers have created a new, exclusive, intimate experience: the Ringmaster Zone. A combined value with the best seats in the house, the Ringmaster Zone offers families an unprecedented look behind the curtain of The Greatest Show On Earth. Fans have the opportunity to walk on the Ringling Red Carpet with Ringmaster Johnathan Lee Iverson and the stars of the show, step inside the Globe of Steel, take photos on the ringmaster’s float and have an up-close elephant encounter.
Ringling Bros. and Barnum & Bailey Presents LEGENDS provides hours of thrilling entertainment that is fun for the whole family for about the price of a movie ticket. A great value in family entertainment, Ringling Bros. is Ticketmaster’s number one most purchased family event. Tickets, starting at $15, are available through Ticketmaster and the Allstate Arena and United Center box offices, by calling 1-800-745-3000, or visiting www.Ringling.com. Additionally, parking is FREE with ticket purchase in all official Allstate Arena and United Center parking lots. Service charges, facility and handling fees may apply. For general show information, call the Allstate Arena at (847) 635-6601, or the United Center at (312) 455-4500.
Find Ringling Bros. and Barnum & Bailey on Facebook, Instagram and YouTube, and follow the latest updates on Twitter @RinglingBros #ChiRingling. 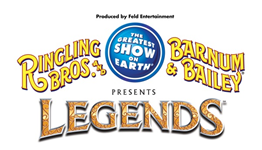 About Feld Entertainment:
Feld Entertainment is the worldwide leader in producing and presenting live touring family entertainment experiences that lift the human spirit and create indelible memories, with 30 million people in attendance at its shows each year. Feld Entertainment's productions have appeared in more than 75 countries and on six continents to date and include Ringling Bros. and Barnum & Bailey®, Monster Jam®, Monster Energy Supercross, Nuclear Cowboyz®, AMSOIL Arenacross, Disney On Ice presented by Stonyfield YoKids Organic Yogurt, Disney Live! and Marvel Universe LIVE! More information on Feld Entertainment is available online at www.feldentertainment.com.
Posted by Bonnie Kenaz-Mara at 9:31 PM