Here at ChiIL Live Shows/ChiIL Mama we've been eagerly awaiting the return of this show since we saw an early version workshopped last season. It's truly hilarious! Some dates are sold out already so don't delay. Get your tickets now, before it's too late. 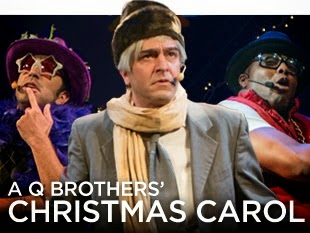 My son, Dugan, and I had the great pleasure of catching this production last year, when they were still workshopping it and we LOVED it! If you like your holiday musicals filled with scorpions and worms, multiple mysterious diseases, Jamaican Rasta Marley, kickin' tunes, and laugh out loud hilarity... this is SO the show for you!

I know Autumn Equinox has barely happened and Halloween is still a ghost of future coming. It's too early to think about holiday theatre, right? Wrong. This is one of our ultra favorite, top picks here at ChiIL Live Shows and ChiIL Mama. Get your tickets now before the word spreads. It's in the small theatre at Chicago Shakespeare after all. The Q Brothers are geniuses of the rhyming word who will entrance and amuse all ages.

Even if you don't consider yourself a fan of the Hip-Hop genre or if you love Hip-Hop and aren't so crazy about theatre... or holiday classics, or whatever, GO already! Before fall even hit, my 13 year old was eagerly asking if this show was returning and practically begging to go.

Do note, there is some language i.e.: "Merry Chris My Ass Mas" instead of Bah Humbug, so it may be inappropriate for young parrots, that might mortify you with quips like that at the family holiday dinner table. And like the more traditional versions of A Christmas Carol, some of it is a bit grim reaper scary. But we loved it and plan to take both our tween & teen this year.

Check out more of our earlier 2014 coverage here.

Chicago Shakespeare Theater (CST) brings audiences a fresh take on a beloved classic, A Q Brothers’ Christmas Carol, developed with hip-hop sensations the Q Brothers and CST Creative Producer Rick Boynton. After a special work-in-progress presentation last season, Chicago Shakespeare is proud to premiere this hip-hop reinterpretation of the perennial holiday favorite by Charles Dickens. A Q Brothers’ Christmas Carol rocks the theater Upstairs at Chicago Shakespearefor a limited engagement, November 19–December 31, 2014.
Written and performed by GQ, JQ, Jackson Doran and Postell Pringle, this new adaptation takes on the cherished holiday tale and wrestles it from its classic roots with irreverence, an array of music styles and a lot of heart. The story is underscored with beats spun live by DJ Super Nova at the turntables, mashing up everything from reggae and dancehall music, to dubstep and epic rock ballads.

A Q Brothers’ Christmas Carol marks the third collaboration between Creative Producer Rick Boynton and the Q Brothers, following two Shakespearean “ad-rap-tations”—Funk It Up About Nothin’ and Othello: The Remix. Premiering at Shakespeare’s Globe for the London 2012 Globe to Globe Festival, Othello: The Remix has toured to festival venues around the world, playing to sold-out houses of multi-generational and culturally diverse audiences in Edinburgh, London, Australia, Germany, South Korea and—most recently—Gdansk, Poland. Its extended five-month Chicago engagement broke records for Chicago Shakespeare’s longstanding CST for $20 program for patrons under 35 years of age. Early next year, Othello: The Remix is set to travel to Australia’s Arts Centre Melbourne (February 18–22, 2015), Dubai and Abu Dahbi in the United Arab Emirates with Art for All (March 1–5, 2015) and to New Zealand for the Auckland Arts Festival (March 5–22, 2015).

A Q Brothers’ Christmas Carol is presented in the theater Upstairs at Chicago Shakespeare, November 19–December 31, 2014. Tickets are $30–48 and may be purchased by calling Chicago Shakespeare Theater’s Box Office at 312.595.5600 or visiting www.chicagoshakes.com.

Posted by Bonnie Kenaz-Mara at 9:04 PM