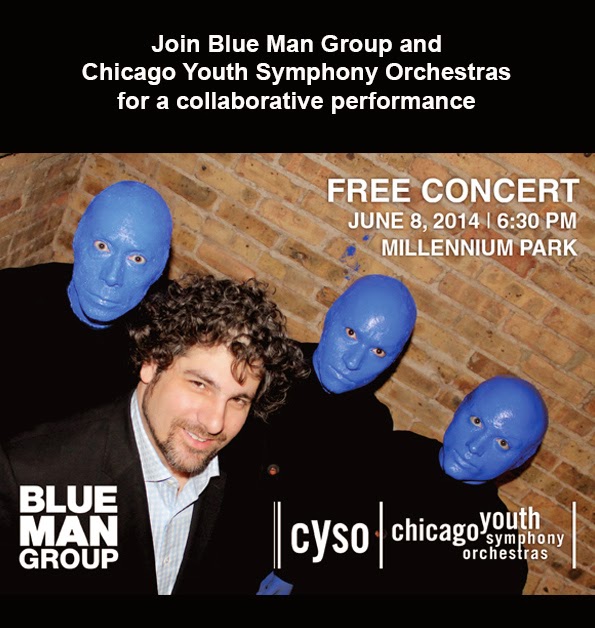 Here at ChiIL Mama we know there's culture and then there's CULTURE. Get a good dose of both in a FREE, family friendly show TONIGHT.

(CYSO) announces a collaborative performance on June 8, 2014 at 6:30 p.m. at the Jay Pritzker Pavilion in Millennium Park. The free public performance will feature a program of selections to be performed during CYSO’s June 2014 tour of China, as well as special pieces featuring Blue Man’s thrilling multi-sensory audience experience, bringing an innovative Blue Man Group spin to the classical repertoire.

“CYSO is excited to bring this rare confluence of talents to the Millennium Park Stage with Blue Man Group this June,” said CYSO Music Director Allen Tinkham. “Combining Blue Man Group’s hilarious theatricality with the youthful energy of CYSO’s talented musicians will make for a potent blend that is certain to offer a singularly exciting concert experience for audiences that night.”

On June 8, Blue Man Group will perform teasers of well-known classical pieces from Khachaturian, Wagner, and others along with the orchestra. CYSO will perform an array of pieces from its tour to China, including Johannes Brahms
’Variations on a Theme of Joseph Haydn, op. 56a, Zhou Long’s “The Rhyme of Taigu” and Béla Bartók’s Concerto for Orchestra.

The special programming will also include other audience favorites, with an infusion of colorful surprises from Blue Man Group.

The Blue Man Group and CYSO performance event is free and open to the public at the Jay Pritzker Pavilion in Millennium Park (201 E. Randolph Street). For more information please visit: www.cyso.org

* What’s New
Shows the next event and the most recent music, videos and news.

* Music
Listen to select CYSO recordings on your mobile device. All repertoire information including composers, works, soloists, conductors and ensembles is included. High quality audio options are available if you are connected through a high speed network.

The CYSO App is powered by InstantEncore.

**The first event featured in the app is the June 8 Millennium Park concert with Blue Man Group! Download this free app now to gain access to program notes, artist information, and special offers from CYSO and Blue Man Group!**

Or search CYSO in the App Store or Google Play

About Chicago Youth Symphony Orchestras
CYSO’s Symphony Orchestra has earned an international reputation as a premi
er orchestral ensemble featuring extraordinary young musicians from the Chicago area. Allen Tinkham was appointed Music Director of CYSO in 2001. During his tenure, CYSO has won eight of its 11 ASCAP National Awards for Adventurous Programming of Contemporary Music, as well as four
Illinois Council of Orchestras awards (two Programming of the Year Awards and two Youth Orchestra of the Year Awards). Under Tinkham’s direction, CYSO ensembles have performed at Orchestra Hall, Millennium Park, Ravinia, Carnegie Hall and several international locales. CYSO has taken the stage three times at Lollapalooza, Chicago’s legendary rock music festival,
the first time in August 2007 when it became the first ever classical music ensemble to do so.

About Blue Man Group
Blue Man Group is a unique and thrilling multi-sensory experience that fuses innovative
theatrical spectacle and powerful original music with hilarious comedy to create a performance experience unlike any other. The iconic, silent, inquisitive Blue Man character has remained consistent since the show’s opening, but the world he reacts to is continuously changing, allowing for a production that continuously evolves.

One of the world’s most popular theatrical productions, today’s Blue Man Group is a blend of signature material that has been in the show since the opening, as well as newer passages that examine the influence of technology on today’s world with a funny and perceptive look at contemporary communication vehicles. The performance then closes with a pulsating finale that has audiences up and out of their seats, featuring an original Blue Man Group music score.

Blue Man Group Ticket Information:
Tickets are available from $49-$99. Tickets may be purchased at the Briar Street Theatre by
calling the box office at (773) 348-4000; by calling Ticketmaster at (800) 982-2787; at all
Ticketmaster ticket centers or via the Internet at
www.ticketmaster.com/bluemanchicago

Posted by Bonnie Kenaz-Mara at 1:39 PM