OPENING: The Last Ship To Be Featured On The TONY AWARD BROADCAST Opens June 10th

Of course, here at ChiIL Live Shows/ChiIL Mama we've been excited about Sting's new musical, The Last Ship.  We've been promoting it for months, but it's nearly HERE!  Check back with us like we vote in Chi, IL... early and often for loads of news, reviews, photo filled recaps, and more.   In fact we just shot loads of show stills at TIDES last weekend, featuring percussionist, Bob Garret who is soon to appear in The Last Ship. 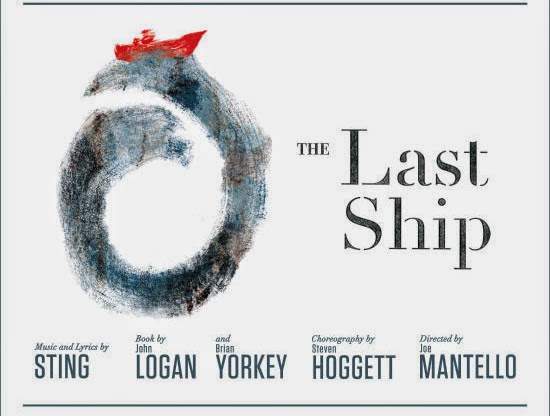 We'll have our full photo feature on TIDES up shortly, which also features Chiara Mangiameli, flamenco dancer lead in Rick Bayless's acclaimed Cascabel.  Tides featured more than 40 dancers, of all ages and from various backgrounds, addressing the events that changed their lives through flamenco dance and song forms with live accompaniment by musicians including Carlo Basile (Las Guitarras de Espana) and percussionist Bob Garrett.

Back to The Last Ship:

Sting, 16-time Grammy Award® winner, will perform a song from his upcoming musical, THE LAST SHIP, at the 68th Annual Tony Awards. The 2014 Tony Awards will broadcast live from Radio City Music Hall in New York City, on CBS, on Sunday, June 8, 7:00 – 10:00 p.m. CST and are presented by The Broadway League and the American Theatre Wing.  For more information on the Tony Awards, please visit www.TonyAwards.com.
THE LAST SHIP will have its Pre-Broadway World Premiere in Chicago at the Bank of America Theatre (18 West Monroe Street). Performances begin on June 10, 2014 for a five-week-only limited engagement through July 13, 2014.

ABOUT THE LAST SHIP
THE LAST SHIP is set in the English seafaring town of Wallsend, a close-knit community where life has always revolved around the local shipyard and the hardworking men construct magnificent vessels with tremendous pride.  But Gideon Fletcher dreams of a different future.  He sets out to travel the world, leaving his life and his love behind.  When Gideon returns home 14 years later, he finds the shipyard's future in grave danger and his childhood sweetheart engaged to someone else.  As the men of Wallsend take their future into their own hands and build a towering representation of the shared dream that defines their existence, Gideon realizes that he left behind more than he could have ever imagined. THE LAST SHIP is a portrait of a community so bound together by passion, faith and tradition, they'll stop at nothing to preserve the only life they've ever known.

TICKET INFORMATION
THE LAST SHIP tickets are available at all Broadway In Chicago Box Offices (24 W. Randolph St., 151 W. Randolph St., 18 W. Monroe St. and 175 E. Chestnut), the Broadway In Chicago Ticket Line at (800) 775-2000, all Ticketmaster retail locations and online at www.BroadwayInChicago.com.  A select number of premium seats are also available for many performances.  Tickets are available for groups of 10 or more by calling Broadway In Chicago Group Sales at (312) 977-1710.
In addition to adoring Sting's work, we're also quite fond of Wicked, Next to Normal and Once, and we've seen and reviewed the Broadway touring productions of all of them. So we're beyond excited to see this creative collaboration come to life on stage!  Got your tickets yet?

Posted by Bonnie Kenaz-Mara at 1:46 PM