PRE-BROADWAY WORLD PREMIERE OF
THE LAST SHIP
ANNOUNCES RUSH SEATING
20 SEATS AT $25. AVAILABLE THE MORNING OF EACH PERFORMANCE DAY
Here at ChiIL Live Shows/ ChiIL Mama we've been eagerly anticipating the opening of Sting's show for months!  At last it's HERE. Got your tickets yet?  We can not wait to check it out! 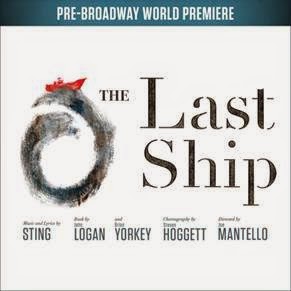 THE LAST SHIP, the new musical with music and lyrics by 17-time Grammy winner Sting, and book by Tony winner John Logan and Pulitzer Prize-winner Brian Yorkey – will begin previews on Broadway at the Neil Simon Theatre (250 W. 52 St.) on September 30 prior to opening night on October 26, according to producers Jeffrey Seller and Kathryn Schenker.

THE LAST SHIP is directed by Tony winner Joe Mantello and has choreography by Olivier Award winner and Tony nominee Steven Hoggett.

THE LAST SHIP will travel to New York following a pre-Broadway tryout June 10 to July 13 in Chicago at Bank of America Theatre.  Inspired by Sting's own childhood experiences, THE LAST SHIP marks the renowned musician's Broadway debut as a composer.

THE LAST SHIP is set in the English seafaring town of Wallsend, a close-knit community where life has always revolved around the local shipyard and the hardworking men construct magnificent vessels with tremendous pride.  But Gideon Fletcher dreams of a different future.  He sets out to travel the world, leaving his life and his love behind.  When Gideon returns home 14 years later, he finds the shipyard's future in grave danger and his childhood sweetheart engaged to someone else.  As the men of Wallsend take their future into their own hands and build a towering representation of the shared dream that defines their existence, Gideon realizes that he left behind more than he could have ever imagined.

THE LAST SHIP is a portrait of a community so bound together by passion, faith and tradition, they'll stop at nothing to preserve the only life they've ever known.

Performances of THE LAST SHIP will begin at Chicago’s Bank of America Theatre (18 West Monroe Street) on June 10, 2014 for a five-week-only limited engagement through July 13, 2014.