ChiIL Mama and the kids had a chance to check out this ethereal and elegant myth on opening night and we loved it. I've long been an admirer of Mary Zimmerman's unique vision and had high expectations for The White Snake, and this production exceeded them.

Today is the last chance to check out this stunning show, for the time being. We sincerely hope a Chicago remount is in the works for the future and we're elated to share that the production is China bound in November!

The White Snake chronicles the tale of a gentle serpent spirit who lives for centuries coiled on a mountaintop. One day, she transforms herself into a beautiful young woman and, with her feisty companion Green Snake, travels down to the world of humans. There, she unexpectedly finds love, happiness and family, and vows to remain a human forever. But when a vengeful monk discovers her true identity, he becomes determined to destroy the life that she’s built—and break apart her marriage to her one true love. Funny, moving and stunningly staged, The White Snake is a ravishing theatrical spectacle that will enchant and delight. 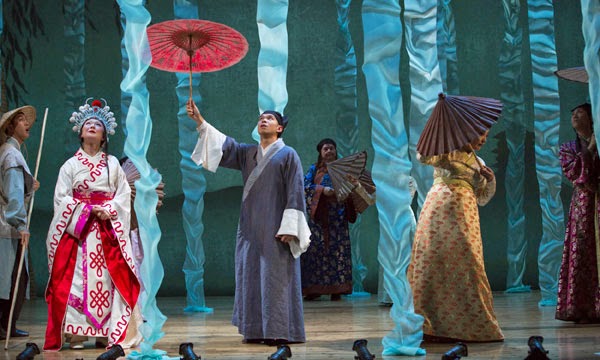 Here at ChiIL Mama/ ChiIL Live Shows we were particularly taken with the stellar back drops, puppetry, and costume design. The set was simplistic, with a minimalist Asian aesthetic in a way that highlighted and enhanced the action of the fable.  The backdrop was a stunning, ink brush tableau, evolving before the audiences eyes.  We were struck by the gorgeous silks simulating rain and the startling effect achieved by dropping them to the stage instead of reeling them upward.

The whole production was a visually stunning, multicultural feast. This is epic storytelling at it's peak. Kudos to Goodman Theatre and Mary Zimmerman for raising the bar yet again.  The White Snake was pure delight. 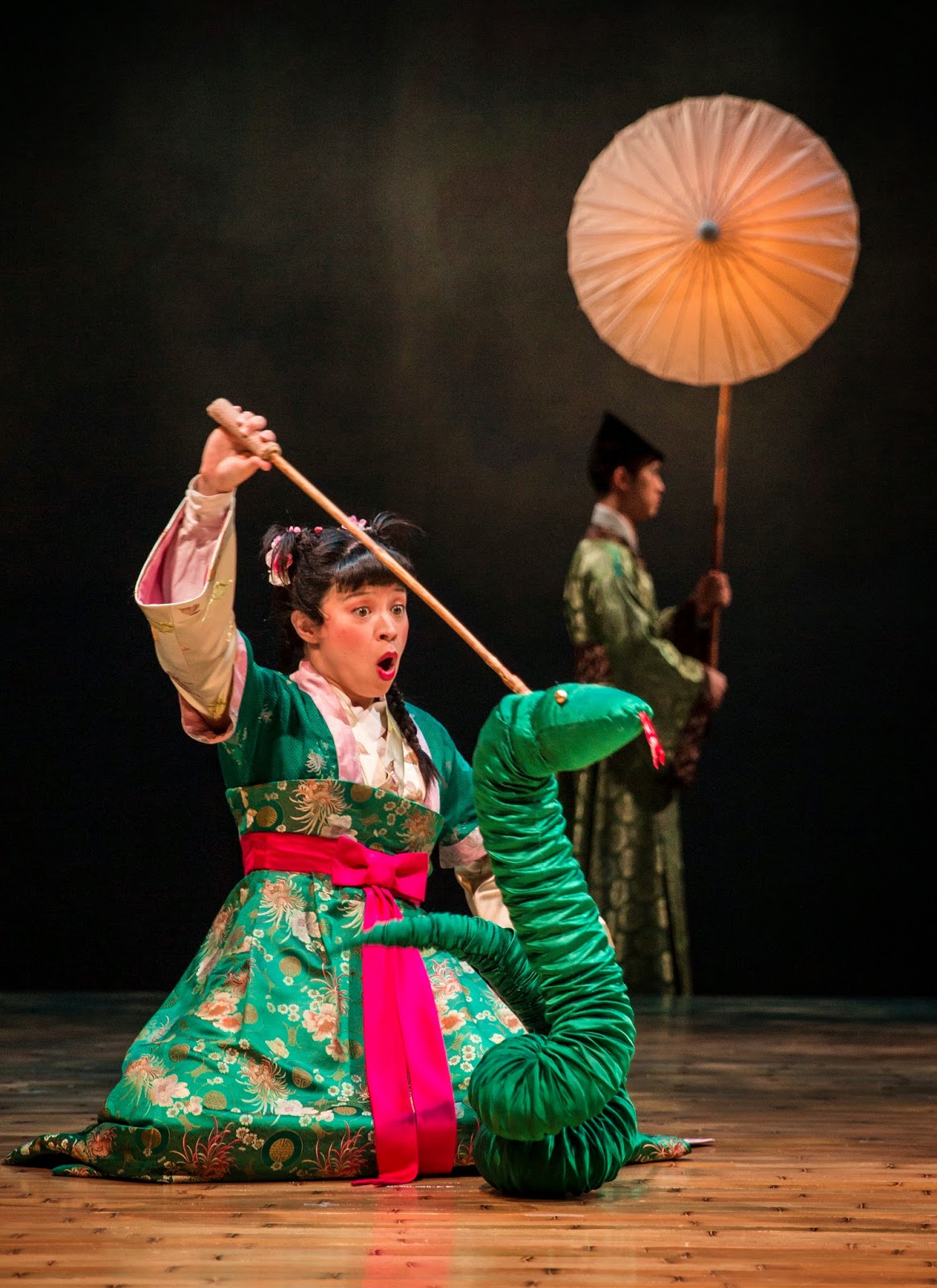 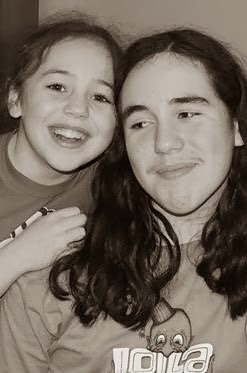 We particularly liked the puppets and how they showed White Snake in so many different ways.  We also liked how the rain came down and how it dropped and people picked it up.  It was really aimed at all ages. Only older kids and adults may understand the full plot, but younger kids would enjoy the visuals.  We highly recommend it and would go see it again.

The White Snake | BEHIND THE SCENES
Wonder how The White Snake made it from the script to the stage? Watch interviews with the cast and creative team to get an inside look at the show.

Goodman Theatre proudly announces that two of its productions will have a life beyond US borders in 2014. Pedro Páramo, a collaboration with Cuba’s Teatro Buendía that premiered at the Goodman in 2013, is one of three major Latin American works invited to perform at the 9th biennial Encuentro Festival (June 21-28)—a celebration and symposium on performance throughout the Americas, held this year in Montréal, Québec. In addition, Tony Award-winning director Mary Zimmerman’s production of The White Snake (on stage through Sunday, June 8 at the Goodman) will appear in China as part of the 2nd annual Wuzhen Theatre Festival (November 7-9), a mix of international and Chinese theater in the ancient water town of Wuzhen, near Shanghai.

"The Goodman continues to make international contributions as it participates in festivals in Canada and China this year," said Chicago Mayor Rahm Emanuel. "Congratulations to all involved with Pedro Páramo and The White Snake. Chicago is a cultural capital, and now the world will enjoy the rich and vibrant talent from our very own Goodman Theatre.”

Said Goodman Artistic Director Robert Falls,“We are proud and excited to introduce international audiences to Mary Zimmerman and Henry Godinez, two artists of our distinguished Artistic Collective, through these important productions. Both of these works are rooted in two of the most significant stories in their respective cultures, and each bears the unique aesthetic of its creator. It’s extremely special to be invited to participate in these prestigious world festivals.”

Stan Lai, Artistic Director of the Wuzhen Theatre Festival, commented, “We greatly anticipate the performances of the Goodman Theatre's The White Snake, written and directed by the eminent US director Mary Zimmerman, at the Wuzhen Theatre. Already the production is gathering interest in China as an American take on a timeless Chinese folk tale that coincidentally comes from the Wuzhen area.

As the closing performance of this year's Festival, The White Snake will form a fascinating bookend to Tian Qinxing's Green Snake, a play based on the same folklore, which will open the Festival. We are excited at this collaboration, and give thanks to the Goodman, which has been such a wonderful collaborator, for this opportunity to bring such a major work of the American theater to China. We also thank Bill Rauch of the Oregon Shakespeare Festival, where The White Snake originated, for originating the possibilities of the collaboration. We look forward to a rich and multi-leveled cross-cultural experience in Wuzhen this fall.”

Added Mary Zimmerman, “It is a great honor and a personal dream to have our version of this time-honored tale embraced by the artists and producers of the Wuzhen Festival. The White Snake is a dreamy story of union and reunion, and it seems fitting that we will now all join hands together in China, across so much time and distance, and across barriers of language and sometimes politics, to retell this tale of a universal longing towards boundless love.”

THE ENCUENTRO FESTIVAL
Actor/director Henry Godinez, Resident Artistic Associate and curator of the Goodman’s ongoing Latino Theatre Fest, appears in the title role of Pedro Páramo. Adapted from Juan Rulfo’s 1955 novel by Director Flora Lauten and Raquel Carrío, the production features a cast of Cuban and Chicago actors.
“We’re thrilled to reunite with our Teatro Buendía colleagues and to continue to develop this groundbreaking production at the Hemispheric Institute’s Encuentro Festival, which investigates and celebrates performance practices throughout the Western Hemisphere,” said Godinez. “The ‘Hemi’s’ inclusion of Teatro Buendía of Cuba/Goodman Theatre’s co-production of Pedro Páramo demonstrates the significance of this international collaboration, and illustrates the potential of cultural exchange as a catalyst for change.”
Posted by Bonnie Kenaz-Mara at 6:05 PM