MOMS’ NIGHT OUT is a comedy about the chaos of motherhood and life that opened in theaters starting May 9, just in time for Mother’s Day. The movie was fun and had it’s moments. However, this is a film with a Christian agenda (AKA: a Faith-Based Film) and it seems a bit underhanded that there's little or no mention of that in any of the advance press.  This is a mainstream feature by Tristar that hides it's evangelical bent in all the advertising, then comes on like a preachy Sunday sermon, once the unsuspecting have bought their movie tickets. The religious overtones really seemed forced and pervasive. 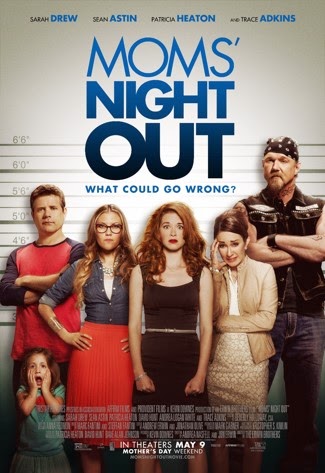 From the advertising I had hoped for a bit more of a Thelma & Louise vibe which was decidedly missing. Some of the script was cliche and played out like a bad 1950's version of family life. MNO adds to the mom guilt with the message that dads are bumbling oafs, incapable of watching their kids, and disasters will happen if you go out with friends and take a break for even one night. Our biggest takeaway--don't reproduce with men too inept to safely watch their own children! 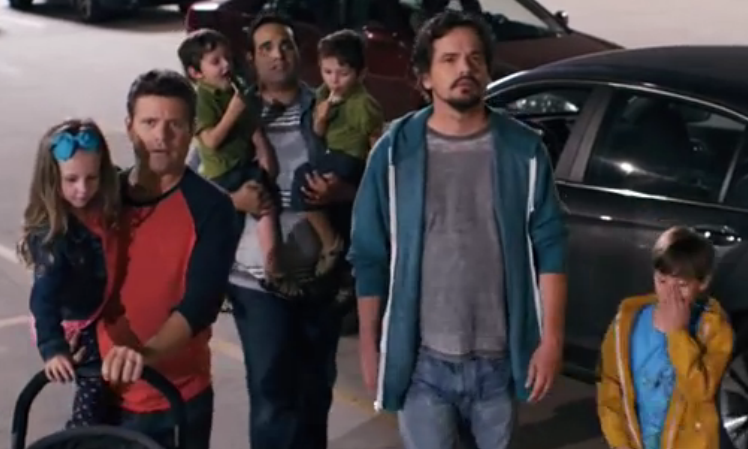 We had a chance to catch an advanced press screening back on April 8th, but we were asked to hold our review until after the film opened.  We do wholeheartedly agree with the Moms' Night Out plot points that scary looking tattooed bikers may be great people (all the ones we know are awesome). Neighbors of other races can be nurturing, caring individuals who step up to help strangers who don't have their act together, and shouldn't be assumed to be home invaders or low lifes (Duh. I'd trust my kids with our Mexican or African American neighbors before the Southern Baptists!) And many holier than thou Christians have a partying past (Yup.).

In fact, my husband has a whole theory about that last point that seems to be anecdotally and scientifically true. Polar opposites, like the farthest conservatives and farthest liberals, are not on a linear continuum, but a circle that loops back and meets where both factions embrace home schooling, home births, "mommy blogging", attachment parenting styles and more! He's also noted that the same addictive personalities you find in the biggest party scenes are the types who are attracted to organized religions, and the same people often flow back and forth between the 2 in both directions! 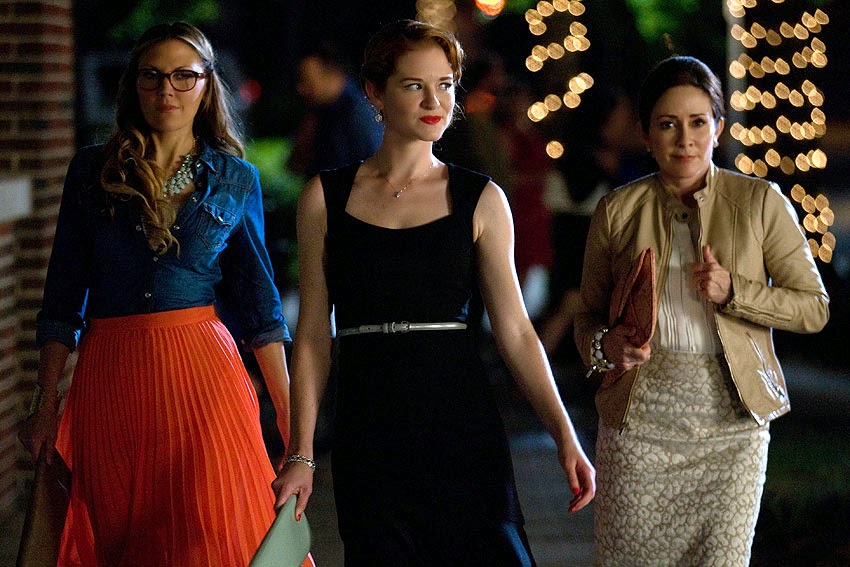 Overall the message of Moms' Night Out IS a positive one. Moms' work IS important and hard and relentless, but not without humor, love and reward. Moms do desperately need a night out with friends, to relax and have fun. If you've never been a stay at home mom of babies and toddlers you have NO concept how exhausting the sleep deprivation, constant vigilance and neediness truly is.

In Moms' Night Out's favor, the right wing Christians DO need to absorb a few of this comedy's takeaways... and I don't mean the myriad of Godcentric monologues. Our society would be far better if the Christians got off their high horses and stopped making sweeping lifestyle judgements on others and waging a morality war, and got back to loving their neighbors, feeding the needy, and working for peace and justice like Jesus did.

If the uptight, sheltered, suburban church goers actually got out and met the tattooed bikers, minority neighbors, single moms, unemployed deadbeat dads, and others they fear, they might find out those people are genuinely good hearted, lovely people.  Just do NOT try to evade the cops in a mini van full of children people. Bad plan, though funny on film. 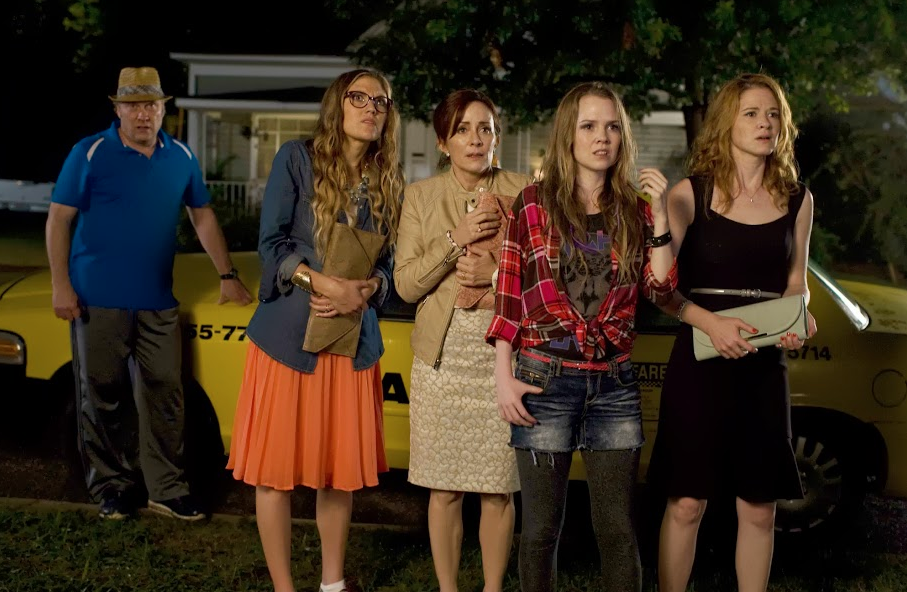 The social media promos for the movie have been great—especially the greeting card style FB blurbs about moms needing a night out, that are getting reposted a LOT. Still, they all dealt with secular, benign, universal truths of mothering without the let go/let God vibe the movie lathers on thick. 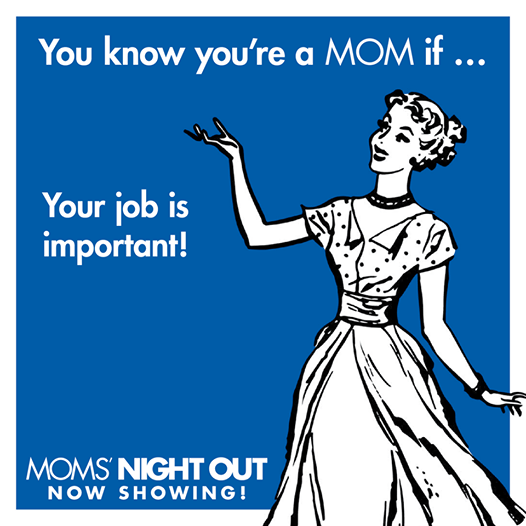 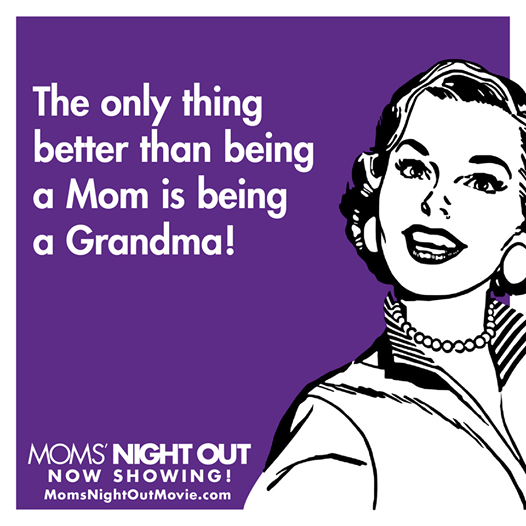 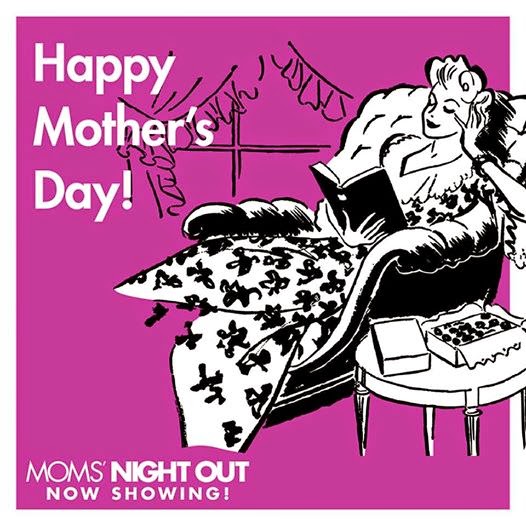 Still, it's an approach that worked well for them.  MOMS' NIGHT OUT advanced tickets sold ranked #2 on Fandango.com and #3 on MovieTickets.com.

In MOMS’ NIGHT OUT all Allyson (Drew) and her friends want is a peaceful, grown-up evening of dinner and conversation... a long-needed moms’ night out. But in order to enjoy high heels, adult conversation and food not served in a bag, they need their husbands to watch the kids for three hours—what could go wrong? MOMS’ NIGHT OUT is an endearing true-to-life family comedy that celebrates the beautiful mess called parenting.

Sarah Drew (who portrays Allyson in the movie) is also a regular cast member on the popular ABC series Grey’s Anatomy.  She does a fine job portraying home schooling, obedient, little Christian, suburban wife and mother on the verge of a nervous breakdown.  But by her own confession in an interview with a friend of ours and fellow Chicago Moms Blogger, Sarah Drew's real life parenting arrangement and MNO options are far more 21st century and equitable.  She has a weekly, standing night out with her friends and nobody ends up in the emergency room.  She ducks out to watch movies on her own and be waited on in a luxury theatre to unwind. And her husband is equally involved in the child rearing duties.  Maybe Moms would do far better to follow her real life example than her retro, religious charade in Moms' Night Out. 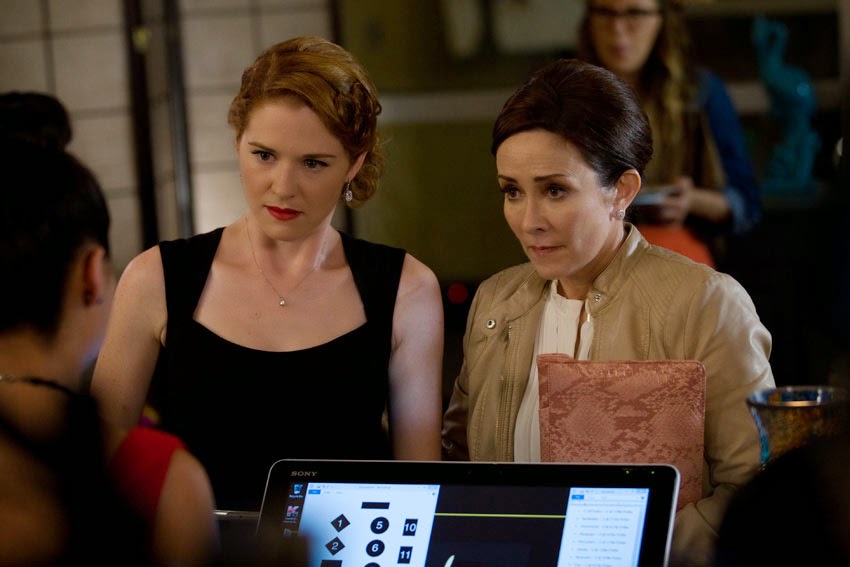 That said, if you're already a church going, suburban, Christian Mom with a pretty conventional view of gender roles and without feminist leanings, then you'll probably relate to MNO and think it's pretty funny.  Otherwise, just know what you're in for, before you chose to see this one.  It's one thing if you knowingly go to a faith-based film, but being blindsided by God peddlers when you just want a large popcorn and some humorous slice of life comedy, is unfair. 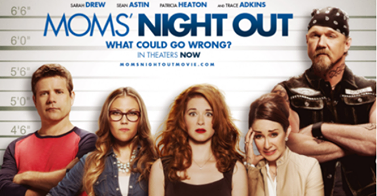 MOM-COM FOR THE WHOLE FAM NO. 3 IN TICKET PRE-SALES

"Go see it! We love MOMS' NIGHT OUT, because you're perfect in your imperfections as a mother."
-Sherri Shepherd, co-host The View

Moms' Night Out is a movie unicorn – something we hope exists, and yet finding one is very, very rare. Most grown women become moms, so how can it be that Moms' Night Out – a comedy about the lives of good moms – is one of a kind?
-Tara McNamara, Fandango Film Mom

MOM'S NIGHT OUT is funny, frisky, fast-moving and filled with first-class performances. It's also a surprisingly wise and moving film about the joys and nightmares of parenthood.
-Michael Medved, nationally syndicated talk radio host, SRN