Show your punk kin, grunge lovers, and snarky teens how cool their parents still are! Bring the family out to City Wine for Cinema Night.  Here at ChiIL Live Shows and ChiIL Mama, Dave Grohl's long been one of our favorites. We're HUGE Nirvana fans and those songs are still in heavy rotation on our ipods.  Grohl is versitile and crazy prolific, playing with a host of greats. Come check out Sound City, the documentary he produced and directed.  It's playing THIS Tuesday at Chicago's hot venue for cool live shows and now films--City Winery!!  ALL AGES. 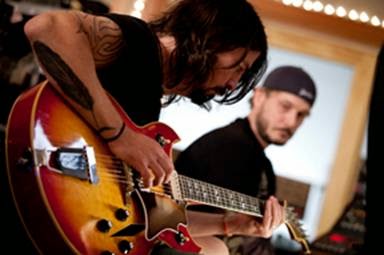 Sound City (Dave Grohl,
2013, 108 mins.): Tuesday, May 20, 8 p.m. ($5 general admission)
Deep in the San Fernando Valley, amidst rows of dilapidated warehouses, was rock ’n' roll's best-kept secret: Sound City. America's greatest unsung recording studio housed a one-of-a-kind console, and as its legend grew, seminal bands and artists such as Fleetwood Mac, Neil Young, Rick Springfield, Tom Petty, Metallica and Nirvana all came out to put magic to tape. Directed by Dave Grohl (Nirvana, Foo Fighters) and featuring interviews and performances from the iconic musicians who recorded some of rock’s greatest albums at the studio, Sound City doesn’t just tell the story of this real-life rock ’n’ roll shrine; it celebrates the human element of music as Grohl gathers some of rock's biggest artists to collaborate on a new album. Using Sound City's legendary analog console, together these artists continue to create musical miracles in a digital world.

All City Winery Chicago events are open to all ages and start at 8pm, unless noted.

City Winery Chicago, a fully operational winery, restaurant with outdoor patio, concert hall and private event space, is located in the heart of the West Loop at 1200 W. Randolph, in the historic urban Fulton Market district. The concert hall accommodates up to 300 guests, all seated at tables with complete beverage and dining service, ensuring a comfortable “listening room” experience enhanced by a state-of-the-art Meyer Sound system.  Riedel is the official and exclusive provider of glass ware, showing City Winery’s commitment to enjoying quality wine in a quality vessel. American Airlines is the Official Airline and Crowne Plaza is the Official Hotel of City Winery. For more information, please visit www.citywinery.com.
Posted by Bonnie Kenaz-Mara at 10:01 AM