Preston Bradley Hall of the Chicago Cultural Center, May 18

Here at ChiIL Mama, we believe one of the best perks of living in a city the size of Chicago, is the amazing array of multicultural events! This one is family friendly and FREE. April was for water, and now May is Earth and Wood. Come experience The Chinese Fine Arts Society's Five Elements Project! 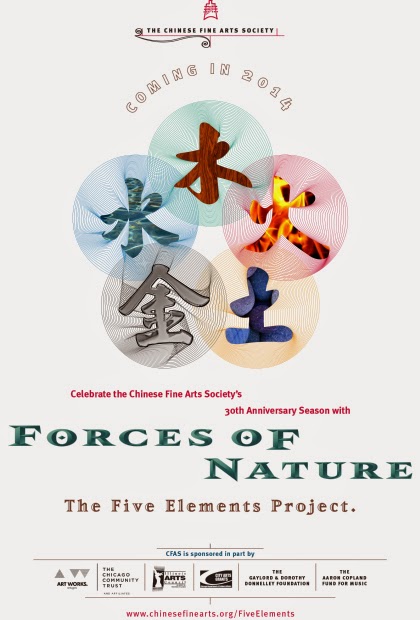 The Chinese Fine Arts Society (CFAS), Chicago’s resource for experiencing and appreciating the art, music and culture of China, continues its 30th anniversary celebration with the second installment in its year-long series Forces of Nature: The Five Elements Project, a musical survey of China's varied natural environment themed around “Earth and Wood” featuring three Chicago Premieres.  The “Earth and Wood” concert is presented in the Preston Bradley Hall of the Chicago Cultural Center, 78 E. Washington Street, Sunday, May 18 at 3 pm.  The concert is free and no tickets are required.

From the Gobi desert to bamboo forests, from sweeping grasslands to mountain vistas, the majestic landscapes of China and its inhabitants are the inspiration for the “Earth and Wood” concert.  The concert primarily features both Chinese and western string instruments – violin, viola, erhu, gaohu, zhonghu – all made of wood.

Inspired by late CFAS founder Barbara Tiao, who many considered a “force of nature,” The Five Elements Project is themed around the five elements found throughout Chinese art, science and philosophy: earth, fire, metal, water and wood.  The Five Elements Project is curated by Qing Hou, Chicago Symphony Orchestra violinist and CFAS artist-in-residence.

The series finale concert takes place in Nichols Concert Hall in Evanston, Friday, November 14 at 7:30 pm.  Tickets for this concert start at $20, $5 for students.

The history of CFAS has been a true “American Dream” success story, beginning when Barbara Tiao, a Shanghai native who fled the country in 1949, eventually settling in Chicago in 1984.  She established herself as a piano teacher and a “cultural ambassador,” sharing her beloved culture with other students and the surrounding community.  This passion was Tiao’s inspiration to start the Chinese Fine Arts Society.  Tiao passed away in 2008, having realized her dream: an organization that has bloomed into a professional entity in Chicago’s artistic scene.  Since its founding, CFAS has been the leading champion of Chinese arts in Chicago, from traditional to contemporary.  CFAS has established itself with widely attended and critically acclaimed cultural events in various venues throughout Chicagoland.

To learn more about the Chinese Fine Arts Society and its programs, visit chinesefinearts.org.
Posted by Bonnie Kenaz-Mara at 9:22 AM