Member of the Pack: Giving Birth With Dogs

Here is my 2012 submission to Listen to Your Mother.  It wasn't chosen for performance, but I'd love to share it with you here.  Everyone has their own unique birth experience, but I've yet to meet another mother who went through labor and delivery with 3 big dogs.  This is my true story, and my doula dogs were more encouraging during labor than you can imagine.

For more info on how to submit your own stories for consideration for Listen to Your Mother click here.

Member of the Pack
by Bonnie Kenaz-Mara

I gave birth the way I live, peacefully, unconventionally, and on my own terms.  Both kids were home births assisted by my husband, a few close friends, big dogs, a doctor, nurse, and midwife.   The kids came into the world, in the heart of urban Chicago, to candle light, burning sage, and great music, surrounded by people who love them. 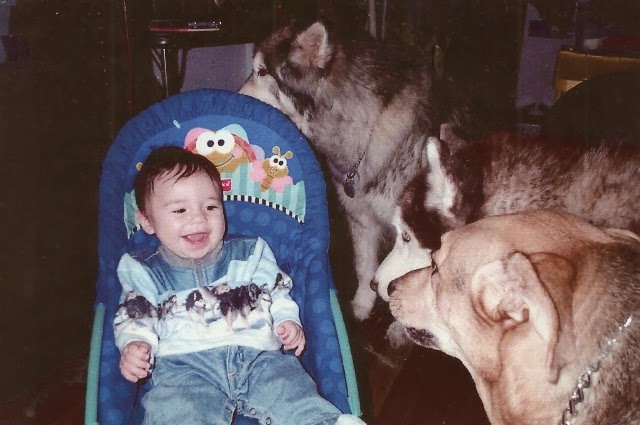 Dugan Jay with my 3 dog doulas: Xanthus, Ubu and Alia

Mothers' Day's intrinsically linked with my daughter, Sage Ani, who was born at 2:10 am on actual Mother's Day.  She's undoubtedly the best present ever.   That night, powerful storms spawned tornadoes in the burbs, and just about prevented the midwife from coming.  The mighty winds and rain knocked out street lights, knocked down trees, and flooded underpasses throughout Chicago, but the storm was stunning to watch.   I stood at the front door as lighting ripped across the sky and thunder cracked, and my bones split open, to let a new human into the world.   I felt powerful, energized, and connected to all the generations who had done this before me, and the others giving birth that very night.

My doctor was at another birth, and didn't make it till Sage was literally heading out.  Despite the raging storm, she came into the world in the peaceful haven of our home, and I was so happy not to be making a mad dash to a sterile hospital ward.   She was a water baby, born in an inflatable kiddy pool in our dining room.   Her two year old brother woke up in time to hop in the pool in his PJs, and sleepily kiss his new sister, before their dad even cut the cord.

Two years before that stormy night, when I first became a mother, we were still in a 6 flat.  As my due date approached, I posted a note in the lobby.  Dear neighbors, if you hear screaming in 2a in the near future, please don't call the police.   Nobody's being murdered.   Someone's being born.

As it turned out, my son was born on my upstairs neighbor's birthday.   What are the odds?  We had another weird birth/neighbor connection, where I ended up an accidental midwife.   It's rare in the US to attend a birth before your own, and this happy accident gave me the guts to go for home births.   My downstairs neighbor was planning a natural hospital birth, and insisted she and her husband could handle it.   Things started hard and fast, though, and her husband came to me in a panic.  I helped carry her downstairs, then stayed with her, while he got the car.   I found myself on my knees by the mail boxes, among junk mail and fliers in the entry way, with a neighbor in pain and not a clue about birth, wondering just how I got there.

I was inwardly chanting, please don't have this kid on the lobby floor.  I know nothing about delivering babies.  I've never even had a birth class let alone a baby!  Outwardly, I rubbed her back and murmured “It's all good.   Hang in there.  We're made for this.”   As her wigging husband frantically threw his musical instruments and debris around the car to make room for her to lay down in back, she looked up at me and said “Please come to the hospital with me!”   So I jumped in my car, and followed them.

She had an easy birth and a gorgeous daughter, Meenakshi, named for a Hindu goddess.  There was a scary moment right after birth, when the baby stopped breathing and started to turn blue, but the staff was nonchalant and said “It happens all the time.   No big deal.”  And they suctioned out her nose and mouth.

It was eye opening.   Even in a short, natural birth, the hospital made Sheelah wear monitors, and told her she couldn't labor in water, or even on her knees, due to “liability”.  They snatched the kid for washing, weighing, and shots, minutes after birth, and overrode the mom's pleas to just hold her daughter.   When she asked for the placenta, they told her it was “hospital property” and couldn't be released, even though it had come out of her body moments before!   When she tried to dispute that, they told her she would have had to file paper work in advance to keep the placenta and without the proper forms there was nothing they could do but dispose of it with other medical waste.

When I was ready to perform the powerful act of giving birth, I didn't forget.   Even an easy, unmedicated birth got complicated and bureaucratic as soon as the hospital was a factor.  So, we opted out and stayed in the comforts of home, where we had an amazingly gentle birth experience on our own terms. I labored where I was most comfortable, held and nursed the kids right away instead of losing them to shots and scrubbings, and we kept both placentas without a fight.  We now have a gorgeous birth willow tree in the back yard, planted on the kids' placentas, and growing stronger and taller with them each year.

Our only hesitation about home birth was our small place and our big dogs.   The tiny 2 bedroom was big enough for me and my dogs, but marriage brought Xanthus, (a Husky/Malamute/Wolf) and a husband into the mix.  I wanted the dogs there, but would our birth staff?   So, we brought up the dog dilemma early in our prenatal care.

Luckily our Dr. spent a lifetime flying out to births in remote Alaska.  He was not only unfazed by birthing with huskies, but fully recommended it!    He said “If the dogs are there, they'll accept your child as a member of the pack and protect him for life.   If they're gone, they may see the baby as an intruder or be jealous.   Here's how it'll go down.   The dogs will come up after the baby's born and sniff him, then lick him.   You let them.   That's how they get his scent and welcome him.   They won't hurt the baby.”    To my astonishment, that's exactly what happened!

Even with a grueling 30+ hour labor, and birthing staff strangers in the house, the dogs were great.   Alia, my mutt girl, came in about once an hour to check up on me in the tub.  She'd look sympathetic, give me an encouraging lick on the cheek, and go keep watch.   She was there when I wailed labor's worse than torture, and said my pelvis felt like a bunch of little gnomes were cranking open a rusty drawbridge.  Around 4am, when transition hit, I screamed in pain, and felt that I couldn't endure a minute more.  Then, the three dogs who had been quiet all night, raised their voices as one and howled along with me!   It was the most primal, powerful, incredible thing I've ever heard.  I felt a huge rush of energy through the pain, and knew they were pulling for me, and that I could do this thing.  A new member of the pack was coming soon.

Dugan Jay, my nearly 9 pound boy, didn't come out easily, but when he was finally born on the couch at 7:10am, after a long, hard night of labor, the dogs were there.   They lined themselves up by age―oldest husky, Ubu, first, to meet my son.   It happened just exactly like the doctor said!   Each one sniffed him, kissed his cheek, and went back and lay down, as tears came to my eyes.    They loved, protected and embraced the new member of the pack, for the rest of their lives.
Posted by Bonnie Kenaz-Mara at 5:13 PM