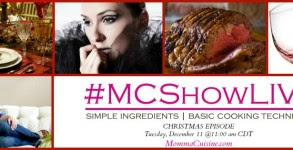 #MCShowLIVE’s “Holiday Celebrations” episode will be streaming on MommaCuisine.com on Tuesday, December 11, at 11am CDT. Broadcasts will be accessible on MommaCuisine.com website, as well as the taped shows on her You Tube Channel (http://you tube.com/mommacuisineshow).

Significant in #MCShowLIVE will be viewer interaction through social media sites such as Twitter and Facebook. Viewers can join the conversation as they follow along the show on Twitter using the hashtag #MCShowLIVE. It is great way for the audience to be a part of the live show. There are also great product giveaways viewers can sign up for that are announced live during the show.

“Great everyday meals” is the mantra of Momma Cuisine. “It‘s about showing busy people that they too can make Great Everyday Meals with simple ingredients and basic cooking techniques,” says Johanna Cook, the personality behind Momma Cuisine, “#MCShowLIVE will bring my recipes to life and give me the opportunity to showcase other great cooking, food talents and inspiring people who can help us with all of our quests to create Great Everyday Meals and Great Everyday Lives.”

Momma Cuisine has enjoyed exposure on Chicago television networks such as WGN and WCIU, on radio WDCB, in print media such as Chicago Parent Magazine, Naperville Magazine, and Suburban Woman Magazine, as well as on digital media sites such as Huffington Post, ifood.tv and Chicagonista. Momma Cuisine has also been featured in live demonstrations at the International Housewares Show, Chicago Cooking Expo and a six-city Chicagoland cooking tour with Buick for the “Buick & Momma Cuisine French Market Tour”.

Now ending the pilot season, #MCShowLIVE’s first official season sponsored by Kenmore, starts on Tuesday, January 8, 2013 at 11am CDT, continuing as a monthly live cooking/talk show, every second Tuesday of the month.

Momma Cuisine is also going to roll out new shows on her You Tube Channel. #TasteBites will be videos of her Great Everyday Meals recipes, while #MommaInTheCity will be a food travel show, showcasing great food places and artisans throughout the country. All shows will be available on MommaCuisine.com as well as her You Tube Channel (http://youtube.com/mommacuisineshow).

Visit Momma Cuisine on the web at www.mommacuisine.com.

Posted by Bonnie Kenaz-Mara at 9:43 PM