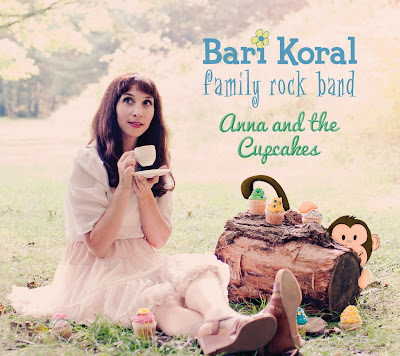 ChiIL Mama was excited to hear Bari Koral's 2nd CD, is every bit as engaging as Rock and Roll Garden.   We especially enjoyed the timely Dragon Comes to Dinner, for the Chinese year of the Dragon.   Bari Koral's infectious charm and joy in childhood pleasures comes shining through every note of Anna and the Cupcakes.   It was a joy to hear her kidalicious, upbeat take on The Avett Brothers' Kick Drum Heart.   Love the Avett Brothers?   Check out our original photo pit shots of their set at Summer Camp Music Festival 2011 here.

Sure, the usual kindie themes are represented here-with Train Song, Rocket Ship and Butterfly.   However, Koral embraces the sweet silliness of childhood through more unique themes too, including songs celebrating shoes and little cupcake thief's with big imaginations.  The album's namesake song follows the misadventures of Anna, a cupcake loving child with a host of hungry imaginary friends and a stack of disappearing treats.  This CD is a sweet treat that will last a bit longer than Anna's cupcakes and won't cause any tummy aches.

The CD cover is a bit odd, with a cartoon monkey, an Alice in Wonderlandesque Koral sipping tea, and a tree stump full of cupcakes....but don't judge a disc by it's cover.   Preschoolers and early elementary agers are going to adore this one.


This continues ChiIL Mama's weird February of coincidences, as we've now reviewed the latest creative endeavors of both Bari Koral and Barrie Cole, reviewed 2 Houdini plays, interviewed Mark Messing 2 times, and saw 2 different plays he wrote the score for open within 2 days of each other.

Anna and the Cupcakes
Bari Koral's 10-song collection of indelible melodies that range stylistically from sprightly roots pop-rockers to infectious blues to country-tinged kickers is the follow up to the group’s first full-length CD, Rock and Roll Garden, which became a hit on the family-music scene, won critical acclaim, and became an award winner, including the Nappa Gold and Parent’s Choice silver.     In the past, ChiIL Mama gave away Rock and Roll Garden to some of our lucky readers, and this year we have FOUR copies of Anna and the Cupcakes to give away right here.   We also have 3 of Little Miss Ann's latest and more Suzi Shelton, too, but we'll start with one of each.  You can earn extra entries by spreading the word, so FB, Tweet and tell your friends.   Then check in with ChiIL Mama and enter like we vote in Chi, IL....early and often.   Entries accepted nationwide!

Enter at the bottom of this post for your chance to win ChiIL Mama's ChiIL Kindie Collection featuring Suzi Shelton, Bari Koral, & Little Miss Ann!!    This amazing set of 4 CDs and a DVD, includes 3 of the best women rockin' out for little kids today.   One lucky reader will be sent:
(Check out ChiIL Mama's live show footage from Little Miss Ann's CD release party and our CD info and video interview with the band right here)

All month we'll be featuring original video interviews, original live show clips, and reviews of all 3 women's work, culminating in our big give away March 15th.   First up, we're featuring Bari Koral's greatly anticipated 2nd CD.   Then we'll have our original video interview with Suzi Shelton and her son and a bunch more of ChiIL Mama's live show clips from Suzi Shelton & Little Miss Ann performing live, together with their children, at Beat Kitchen in Chicago.

The band is led by Bari Koral, an acoustic guitarist, and singer/songwriter who has firmly established herself in the rich tradition of children’s music, while uniquely exhibiting a deep emotional and fun-loving connection with her audience thanks to infectious songs, entertaining themes and driving upbeats.

Koral and the band have hit the road to perform the Anna and the Cupcakes songs, as well as such old favorites from Rock and Roll Garden like “Backpack” and “Hey Ducky.”

More dates to be announced.


For More Information about the Bari Koral Family Rock Band Please Visit her main web site.  Or check her out on Facebook. Anna and the Cupcakes is available now on CD Baby and Amazon.com.


*Wait for Rafflecopter to load up right here (if you've gone through RSS feed or are scrolling down the blog and don't see it, click on the actual page title and it should pop right up).   Entries are easy.   Winning rocks!