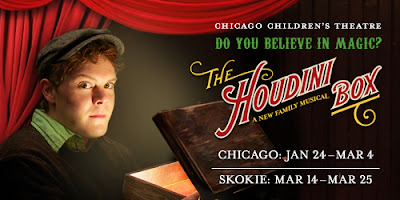 Our Valentine's Day gift for you:

Click and enter here to win 4 free tickets to Houdini Box from ChiIL Mama!   Enter through midnight 2/15.
Based on the book by Brian Selznick, Directed by Blair Thomas, book and lyrics by Hannah Kohl, music by Mark Messing. Now through March 4: ONLY 3 WEEKS LEFT! Mercury Theater Chicago 3745 N. Southport Avenue
Check back with ChiIL Mama early and often.   We're putting the finishing touches on our original video interviews with Brian Selznick, Blair Thomas, Hannah Kohl, and Mark Messing!
Save $10 on tickets today only with code LOVE. If you miss it, don't fret, code HUGS will get you $5 off tomorrow.

Valid for shows at The Mercury Theater onlyThe Houdini Box "merits a trip to The Mercury Theater with someone one loves" -Chicago Tribune Ideal for ages 5 and up Brought to life right before your eyes by actors, musicians, and puppets, sure to thrill and surprise. As famed escape artist Harry Houdini circles the globe performing one incredible stunt after another, Victor, a young devotee goes through his own rigorous magician’s training – locking himself in closets, holding his breath under water and walking into walls. After a chance encounter with his hero, Victor receives a special box that just might contain the secrets of Houdini’s great success. 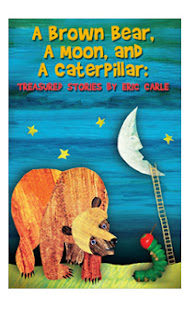 Save now onearly-bird Tickets! "A Brown Bear, A Moon, and A Caterpillar: Treasured Stories by Eric Carle"LIMITED ENGAGEMENT!ONLY HERE FOR ONE MONTHBy the company the brought you the sold out run of “The Very Hungry Caterpillar,“ "A Brown Bear, A Caterpillar And A Moon: Treasured Stories By Eric Carle" will bring together old favorites and new friends.Featuring evocative music, stunning visual effects and innovative puppetry, the triple-bill highlights three of Eric Carle’s most beloved tales. "The Very Hungry Caterpillar" is joined by a whimsical cast of adventurous animals drawn from the pages of "Brown Bear, Brown Bear What Do You See?", and the poignant story of a young girl’s unusual quest, "Papa Please Get The Moon For Me", for an hour-long performance, which both entertains and educates. May 2 - 27Victory Gardens Biograph Theatre2433 N. Lincoln AvenueSave 20% until March 1st, 15% until April 1st
Posted by Bonnie Kenaz-Mara at 5:56 PM