Kindie Land: 4 Free Tixs For Family Friendly Bluegrass in Berwyn 2-19-12 #Give Away 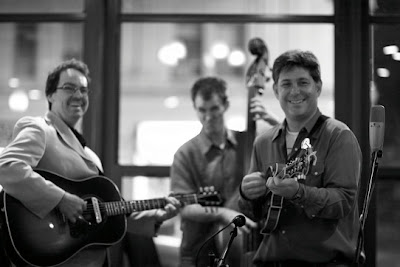 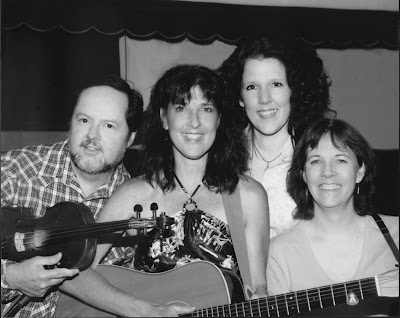 Two ChiIL Mama readers will win a pair of adult tickets.   Kids are just $2!!   Enter at the bottom of this post.

Four years ago in the pre-Christmas crush, Barb Silverman and Colby Maddox had a vision. Surely the cure for the deep winter cabin fever that plagued Chicago-area families and single folk alike was the bluegrass and acoustic swing music that these two veteran musicians knew so well. The only question that remained was how to get this mass cure to the people. Bill Fitzgerald heard the call of these two visionary musicians, and he has opened up his club in Berwyn, IL every year for the past four years for this two-band bash, and the response has been wonderful. Crowds have been a mixture of string-band enthusiasts who come to cheer on the tasty licks and tight harmonies, dancers who like to cut a few squares at the end when Barb calls a dance, and families looking for some fresh fun that does not challenge young ear-drums. When they met at Michigan's Bliss Festival in 1992, Silverman and Maddox did not realize that their destiny would be to eventually work together on this fusion of acoustic styles. As fellow teachers at the Old Town School, though, they quickly realized that their paths were meant to cross. Dubbed a "stunning vocalist" by the Old Time Herald, Barbara Silverman has performed in concerts, festivals and workshops nationwide. She is known for her engaging presence, bluesy vocals, clever original numbers, solid swing guitar and piano accompaniment, and amazing washboard pyrotechnics. Performing solo or with the renowned Laketown Buskers jug band, she has appeared on A Prairie Home Companion, the Studs Terkel Show, and recently won Chicago's 2010 Battle of the Jug Bands. Barb is also a master teacher of folk dance and music traditions and an ace square dance caller. Maddox moved to Chicago in 1995 to work with The Special Consensus bluegrass band where he rubbed elbows and shared the stage with many of his heroes and played for a short time in a duo with young banjo wizard Noam Pikelny. In 1999 Colby moved on to teaching at the Old Town School of Folk Music where he quickly became a mainstay teacher of mandolin and fiddle. In 2006 Colby won first prize at the Rocky Grass Mandolin Competition in Lyons, Colorado. Recent side projects include playing on the soundtrack for the recent PBS documentary The Hayloft Gang: The Story of the National Barn Dance, narrated by Garrison Keillor. Mike Church, guitarist with Sunnyside Up, hails from Lenoir, North Carolina, just down the road from Doc Watson. Church relocated to LA in 1990, playing jazz in and backing up numerous singer-songwriters on LA club circuit and nationwide. Rick Veras, fiddler with The Teflons, has appeared with Patsy Montana and Rocky Stone and his high-level swing fiddle is featured most recently on Mose Allison's "I Don't Worry About a Thing," which can be found on Live From the Old Town School, a compilation of live performances. The 5th Annual Post-Brunch Bash will take place Sunday, Feb. 19 from 1-4PM CST at Fitzgerald's, 6615 Roosevelt Rd. in Berwyn, IL. The event is all-ages, $12 for adults and $2 for kids.

Kid-friendly Chicago bluegrass acts Sunnyside Up and The Teflons are performing at the 5th annual After-Brunch Bash.   There will also be a barn dance for the whole family and children’s tickets are just $2!

Got little pickers?   We recorded the Okee Dokee Brother's whole kindie, bluegrass show last week at Beat Kitchen and we'll be sharing it with you, a couple awesome songs at a time.   We even have an original video interview with the band coming soon.   We'll also be giving away 3 of their award winning CDs and previewing their upcoming May release!

So come ChiIL out with ChiIL Mama this winter, for the hottest kindie and adult music news, theatre, great give aways, photo and video filled recaps and more.