Here are ChiIL Mama's original photos from opening night at The Houdini Box.   The kids were elated to meet author/illustrator Brian Selznick, since they adore his books, The Houdini Box play and the movie, Hugo.   He signed a copy of all of his books for them!   Double click the slideshow for easy sharing options and more at SmugMug.


Win Free Tickets to The Houdini Box at Chicago Children's Theatre Sat 2-18!   We've given away 4, but we've conjured up 4 more....tickets that is.   Enter at the bottom of this post for your chance to win.

It's a magical month in Chi-Town with both Houdini Box at Chicago Children's Theatre and Death and Harry Houdini at The House Theatre.  Houdini, who died Halloween night in 1927,vowed to attempt to return from beyond the grave.   This February, he's doing a pretty spectacular job of it, as his spirit lives on in 2 creative collaborations.

In a magical synchronicity, worthy of the great master of illusion himself, Chi-Town can get completely immersed in Houdini this winter!   Houdini Box is great for all ages and vividly and expertly brings to life Selznick's tale of a young boy's meeting with the great Houdini.   The show mixes live action, puppetry, and an amazing original score by Chicago's own maestro of magical mayhem, Mark "Mucca Pazza" Messing.   Check out our original video interview with Mark (coming this week), who also just had free reign on the score for Theatre Oobleck's highly acclaimed Hunchback Variations Opera, also now playing.

**Both Houdini shows even share a trickster in production staff, who worked out illusions for both!  Check out our video interview, when we post it, and/or check out The House and Chicago Children's Theatre's sites, and if you correctly list his name, it's worth 4 entries!

The House Theatre show, Death and Harry Houdini, at The Chopin, is self rated PG13, although after seeing opening night we plan to bring our 8 & 10 year olds back.   There are some intense gas mask wearing, grim reaper scenes and death defying escape arts, but nothing too over the top for tweens and teens, unless you have a very sensitive child.   This heart pounding remount of House Theatre's innagural show kicks it up a notch by giving Dennis Watkins propensity for truly stunning trickery, a historical context, setting, costuming, characterization and plot.   We adore the theatre genre that couches circus arts within a theatrical storyline.   Cirque du Soleil does that so well, as do our local gems, The House Theatre, Lookingglass Theatre, Aloft, 500 Clown, TMLMTBGB and Actor's Gymnasium, among others.   This timely remount celebrates a decade in the life of The House Theatre in grand fashion.   This one's not to be missed!


*ChiIL Mama has original video interviews with 4 Houdini Box creatives, including Brian Selznick, Oscar nominated author of Hugo Cabret & Houdini Box, the director, the lyricist and the composer.   We'll be posting all of those, along with our full reviews this week!
Directed by Blair Thomas. Book and Lyrics by Hannah Kohl, Music by Mark Messing. Based on the book THE HOUDINI BOX written and illustrated by Brian Selznick, and published by Atheneum Books for Young Readers

So check back in and ChiIL out with ChiIL Mama.   Spread the word and enter like we vote in Chi, IL...early and often. 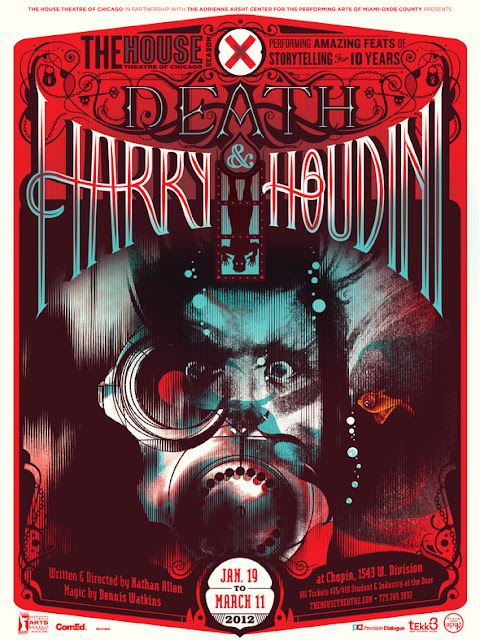 Here's the Details from The House:
Our 10th Anniversary production of Death and Harry Houdini is extending through April 15!

As a fan of The House, you are part of something truly special. This incredible show has broken records, selling every ticket just one week after our Opening Night! If you were not able to get in before the regular run sold out, we now have 27 added performances for you to choose from.
Single ticket prices are increasing, so additional tickets for you and your friends are offered at a discount price of $30 each. Use code FRIEND10 for tickets between now and 4/8. See all the new dates below.
On February 24, The Magic Parlour transfers to the Palmer House Hilton!

Need more magic? See Dennis Watkins (star of Houdini) perform mind-blowing magic and mind reading in his up-close late-night show. Act fast for tickets to the final performance at the Chopin on 2/17, or slip on something swanky and be one of the first to witness The Magic Parlour at the Palmer House. Because you are a friend of The House, these premium tickets are offered at a discount price of $50. Use code PALMER25 when you buy. See The Magic Parlour dates below.
Iron Stag King update


Directed by Blair Thomas. Book and Lyrics by Hannah Kohl, Music by Mark Messing. Based on the book THE HOUDINI BOX written and illustrated by Brian Selznick, and published by Atheneum Books for Young Readers
*Wait for Rafflecopter to load up right here (if you've gone through RSS feed or are scrolling down the blog and don't see it, click on the actual page title and it should pop right up).   Entries are easy.   Winning rocks!

Posted by Bonnie Kenaz-Mara at 2:59 PM