We were so jazzed to talk to these two creative forces, whose work we've admired for decades.  They also happen to be Chi-Town Dads (Mark's a new Granddad, too).  We LOVE Lookingglass Theatre and Mucca Pazza and were curious to know how a sousaphone player, who heads up a punk rock marching band, and a power house director/founding member of 2011 Tony Award Winning Lookingglass Theatre, teamed up.  Their collaboration has resulted in what's sure to be another amazing, cutting edge show for Chicago Children's Theatre.

We were also elated to be the first to get a sneak peek at the stage--still a work in progress, but vividly and magically alive already!  We love book based theatre and this awesome set takes things one literal step further with a book based set!  We can't wait to see the classic characters come to life and spring off the pages of this giant, colorful, chunky book.  Chicago Children's Theatre is set to open Goodnight Moon previews October 27th.

ChiIL Mama chatted with the actors following rehearsal and learned that almost every part of the stage moves and interacts with the characters.  Some of the multifaceted actors are playing upwards of 6 different characters, and we can look forward to a drumming fire and a saw playing mouse!  The actors have been working hard, but also getting playful with the production, and thoroughly enjoying the process.  They have been engaging in improvisation along with the scripted bits, and keeping the best, funniest stuff for us....the audience.

ChiIL Mama is also excited to be giving away a family 4 pack of tickets right here.  Enter at the bottom of this post for your chance to win.   All you insomniac bunnies out there can enter through this Monday at midnight.

Winners will be announced on FREE TICKET TUESDAY 10/25, along with our winners of 4 tickets to Ringling Bros. and Barnum and Bailey Circus & Mr. Singer and The Sharp Cookies at Beat Kitchen.

****DAVID KERSNAR is a founding ensemble member of Lookingglass Theatre Company. At Lookingglass he conceived and directed La Luna Muda, Through The Looking Glass, and Brundibar which was co-produced with the Chicago Children's Choir and Lively Arts. Kersnar has performed with the company in Our Town, The Secret in the Wings, Summertime, Her Name Was Danger, and The Great Fire. He served twice as Artistic Director and has also served as the Education and Community Program's Master Teacher.
Kersnar founded and currently instructs with the Lookingglass Education and Community Program and served as its director from 1992 - 1997. His film and television credits include U.S. Marshals, Since You've Been Gone, and Early Edition. David most recently co-wrote and directed The Last Act of Lilka Kadison.   He also directed Sita Ram, a collaboration with Jai Uttal, Chicago Childrens' Choir and Natya Dance Theatre. Kersnar lives in Chicago with his wife, Christie and their sons, Drew and Kyle and daughter, Leah. David recently directed Jose Rivera's Marisol as the thesis production for his Master of Fine Arts degree from Northwestern University.
****Mark Messing is a composer and musical agitator. He is Musical Director of circus punk marching band Mucca Pazza and has led the band from coast to coast through concert halls, public parks, neighborhood pubs and a dozen canoes on the Chicago River. They have travelled the country with their message of frenetic joy and through their benefit series they have brought funding and exposure to small local community organizations.
He has composed music for numerous independent films including The First Breath of Tengan Rei (2009) by Junko Kajino and Ed M. Koziarski, and has been musical director for hundreds of theater performances. As Musical Director for Redmoon Theater he composed for 100 tiny radios at the Museum of Contemporary Art, a 35-foot drum tree at Millennium Park and musicians on stilts at Puppetropolis.
His new company, Opera-Matic, performs Lullaby Parades on bicycle powered floats in Chicago neighborhoods at twilight.
Visit www.opera-matic.org
Visit www.mucca-pazza.org 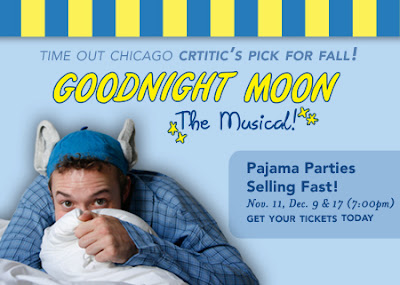 CCT is bringing everyone's favorite bedtime book vibrantly alive on stage in a full-length new musical. Watch as Bunny's room magically comes alive as he dances and sings his way to sweet dreams through nursery rhyme scenes with dancing bears with chairs, the Cat and the Fiddle, the Cow Jumping Over the Moon and even a trip through the night sky with dancing constellations.


For more show information and details on donating books and PJs to needy children through Scholastic and The Pajama Program, check out Chicago Children's Theatre's Website. Word is, the PJ Parties are selling out fast, so reserve your tickets today.

Enter for here for your chance to win a Family 4 Pack of Tickets
Posted by Bonnie Kenaz-Mara at 8:46 PM