IMMERSIVE FRIDA KAHLO Now Playing in Chicago Through May 28, 2022 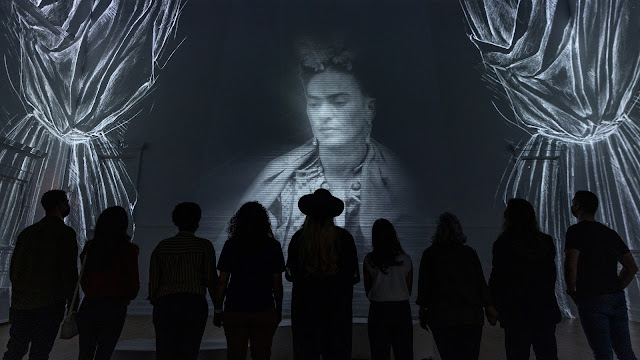 Here at ChiIL Mama, we loved Lighthouse Immersive's Immersive Van Gogh so much we came out to see it 3 times! I even did yoga in the space & provided yoga photos for Fan Dads. You can still catch it in Chicago through May 30. Check out ChiIL Mama's original photo filled review here. Now we're equally jazzed to see IMMERSIVE FRIDA KAHLO. We're still solidifying a date, so check back early and often for loads of other great Chi, IL arts and entertainment, and I'll have my full review up with original photos and videos shortly. 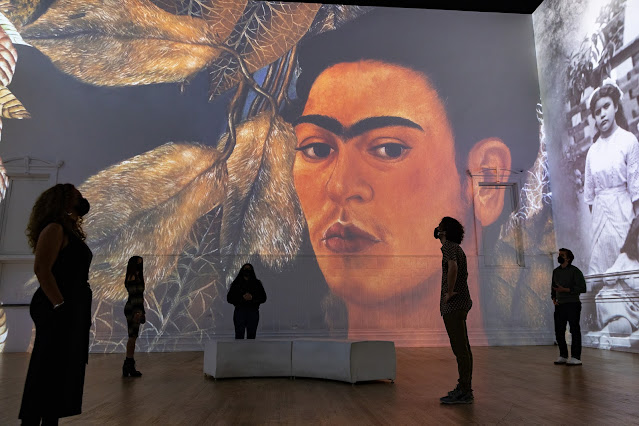 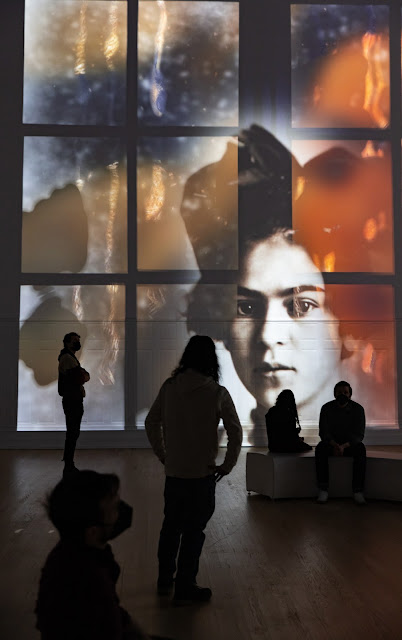 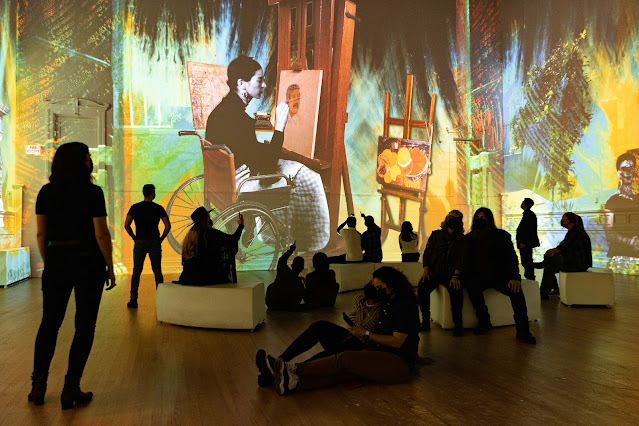 IMMERSIVE FRIDA KAHLO arrives to Lighthouse ArtSpace at Germania Club (108 W. Germania Pl) Feb. 24 through May 28, 2022. Tickets are on sale at immersive-frida.com. Ticket prices start at $39.99 with timed and flexible options available. 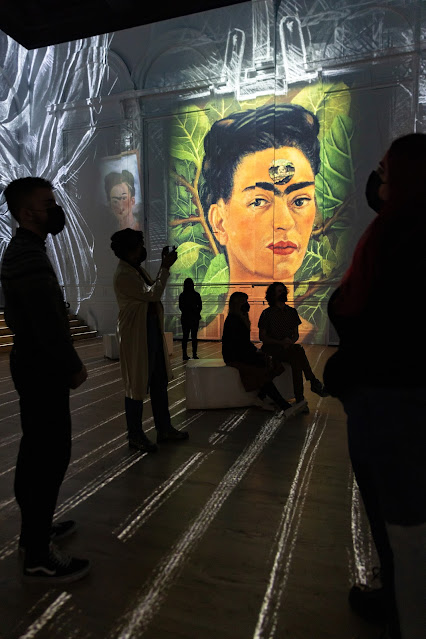 “The success of Immersive Van Gogh has demonstrated that audiences are excited to experience art in a new way. Our Italian creative team are experts at digitally exploring masterworks in such a way that viewers are not merely passive observers. They obtain an even richer understanding of the artist by seeing the work as its creator might have,” said Lighthouse Immersive Producer Corey Ross. “That said, Siccardi presents Kahlo’s works in a format very distinct from that which he utilized in examining Van Gogh’s. He does not try to unify the many styles Kahlo used in her lifetime, but instead, presents them to us as a series of kinetic tableaus that may initially contradict – but eventually illuminate – each other.”

“Frida Kahlo’s work is uniquely suited to be explored in an immersive environment and her life story is equally fascinating,” added Lighthouse Immersive Producer Svetlana Dvoretsky. “Kahlo lived her life as one giant journey of exploration, and her art mirrored that journey. Our goal is to give our viewers more than an examination of her work; we also hope they will leave with a richer understanding of the smart, complex woman who created these timeless masterpieces.”

“In this piece, we will chase Frida’s world, always in motion,” adds Siccardi. “We will discover her tenderness and hostilities by taking in her observations and fantasies. Our hope is that viewers will let themselves be penetrated by Frida’s stories, and in so doing, live vicariously through her.”

Kahlo’s work bridges surrealist and magic realism traditions – blending authentic depictions of her life with fantastical elements reflecting her inner thoughts and struggles. Folk art, mysticism, surrealism, magic realism and a notably revealing series of self-portraits are all included in the projections. Among the works featured in the piece are The Two Fridas (1939), The Wounded Deer (1946), and Diego and I (1946), intermingled with an assortment of photographs, drawings and iconography. Alongside her paintings, Siccardi’s piece also includes photos of Kahlo at various ages and images of figures from Kahlo’s life that influenced her worldview. The projections are shown on Lighthouse Immersive’s massive architectural canvas, using state-of-the-art projectors for a crisp image and high-quality sound systems that heighten the mood-setting score. 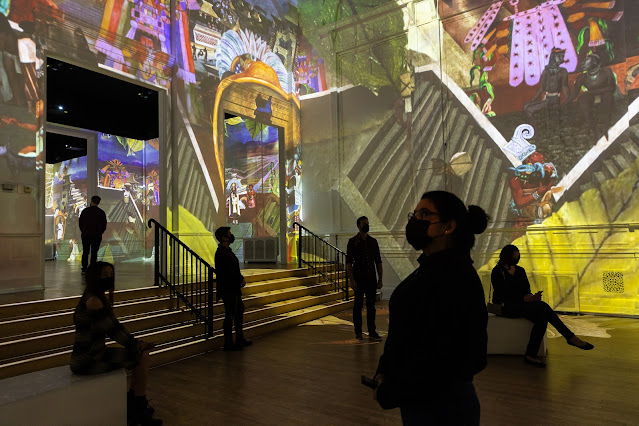 Kahlo was born in 1907 in Mexico City. After surviving polio at the age of six, Kahlo was involved in a horrific accident at the age of 18, when the bus she was riding on was struck by a streetcar, leaving her with a broken spinal column, along with a myriad of other injuries. Bedridden, Kahlo was encouraged by her parents to take up painting to pass the time. A custom-made easel allowed her to paint while lying down. During these long days, Kahlo often spent hour after hour staring at her own image that was reflected in a mirror fixed over her bed. It is here that she began presenting herself as the subject matter of her work, channelling her personal struggles into her art. Kahlo’s travels throughout Mexico and the United States further developed her artistic style. Individualistic and rebellious, her spirit was torn between the Communist Party and the Mexican Nationalist movement. Despite her lifelong passion for her husband, Diego Rivera, she is said to have had numerous affairs with other men and women. Throughout her life, Kahlo developed a rich iconography touching on the realms of life and death and mixing violence and vulnerability in ways that often shocked viewers by pushing gender norms. Kahlo stands today as an iconic figure and a symbol of female empowerment, individual courage and Mexican pride.

Kahlo’s popularity has grown exponentially in recent decades and has been prominently featured in museums worldwide. Public interest was bolstered by several recently released biographies and Julie Taymor’s Academy Award-nominated film starring Salma Hayek. The announcement of IMMERSIVE FRIDA KAHLO comes after a recent record-breaking sale of Frida Kahlo’s 1949 painting “Diego and I,” which sold at Sotheby’s on Tuesday, Nov. 16 for $34.9 million dollars, making it the most prized piece of Latin American artwork ever sold at auction. The sale of “Diego and I” surpassed a benchmark set by Kahlo’s husband Diego Rivera in 2018, when one of his paintings sold at auction for $9.76 million. 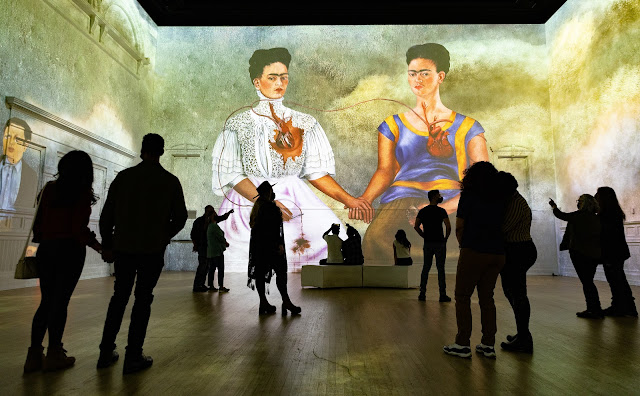 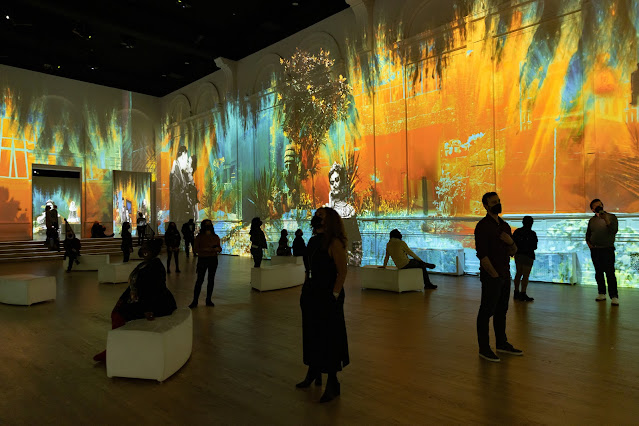 In the last year, the Canadian company has announced or opened new galleries in 21 U.S. cities including Chicago, Dallas, Houston, Las Vegas, Los Angeles, New York City and Orlando. To date, Lighthouse Immersive has sold well over 4 million tickets to IMMERSIVE VAN GOGH across North America, with Art Net recently commenting on the wave of immersive galleries, calling it “one of the largest coordinated art phenomena of all time.”

Maria Shclover and Irina Shabshis are the co-founders of Maestro Immersive Art. Shclover founded Maestro Artist Management in 2004, Shabshis in 2005, and together they have presented more than 1,000 theatrical and classical music performances across the United States, including projects with Michel Legrand, Mikhail Baryshnikov, John Malkovich and more. 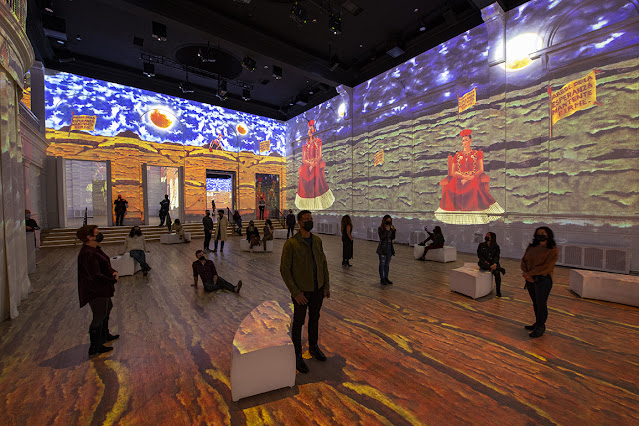 Posted by Bonnie Kenaz-Mara at 2:32 PM