THE ORIENTAL THEATRE TO HONOR JAMES M. NEDERLANDER AND HIS BROADWAY LEGACY IN CHICAGO WITH FEBRUARY 2019 NAME CHANGE 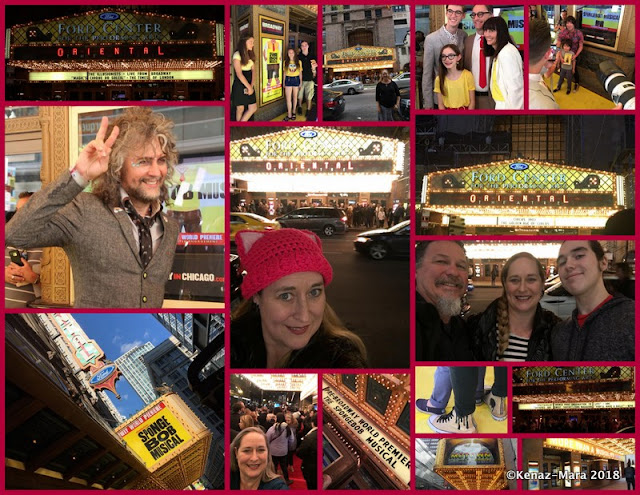 Over the past decade that I've been reviewing theatre in Chicago, and for twenty years before that as a performer and theatre fan, I've enjoyed numerous productions at Chicago's iconic Oriental Theatre. It's my favorite for ornate decor and mythical creatures, not to mention some of Broadway in Chicago's finest pre-Broadway world premiers and touring shows. As of February 2019 it will be sporting a new name with a long legacy, the JAMES M. NEDERLANDER THEATRE.

Broadway In Chicago proudly announced their plans to honor the late James M. Nederlander, the legendary Broadway theatre owner and producer, patriarch of Broadway and champion of Chicago’s Downtown Theatre District, by renaming the Oriental Theatre as the JAMES M. NEDERLANDER THEATRE. As founder of Broadway In Chicago, it is appropriate for the name James M. Nederlander to grace the marquee of Chicago’s iconic theatre at 24 W. Randolph. The new marquee and signage will be unveiled as the NEDERLANDER THEATRE, on Tuesday, February 12, 2019, with the opening of DEAR EVAN HANSEN.

“In 1954, James M. Nederlander had faith in Chicago as a long-run theatre town and has supported Chicago getting the best of Broadway since then. He brought his shows to the finest theatres in Chicago including the Blackstone, the Studebaker, the Shubert and the Michael Todd, and in creating Broadway In Chicago, changed the landscape of Chicago theatre, making this great city one of the most successful commercial homes for Broadway outside of New York. Renaming the theatre gives us a way to say thank you and to acknowledge the extraordinary difference he made for Chicago in his lifetime,” Lou Raizin, President of Broadway In Chicago, said.

James L. Nederlander, now president of The Nederlander Organization, said, “The renaming of the theatre on Randolph, in honor of my father, is something he would have been so proud of, as he had a love for Chicago that manifested in his steadfast support of Chicago’s theatre community until the day he died. I am lucky to have inherited his love for Chicago and I am moved by this acknowledgement of his work on Broadway and his commitment to Chicago as a beacon for theatre across the country.”

ABOUT JAMES M. NEDERLANDER
1922-2016
The late James M. Nederlander was a visionary theatrical impresario who built his family business into one of the largest private live entertainment companies in the world that now encompasses venue ownership and management, theatrical producing and concert presentation, merchandising, concessions and patron services, including Broadway In Chicago.

Beloved by the industry, Jimmy produced over 100 of the most acclaimed Broadway musicals and plays. He was the recipient of many distinguished honors including the United Nations Foundation Champion Award (2012), The Broadway League's Schoenfeld Vision for Arts Education Award (2010), the New York Pop's Man of the Year (2008), the Special Tony Award for Lifetime Achievement (2004), The Actors' Fund Medal of Honor (2002), The Broadway League's Distinguished Lifetime Service Award (2002), United Jewish Appeal-New York Federations' Bernard B. Jacobs Excellence in the Theatre Award (1997) and the Hollywood Chamber of Commerce Star on the Hollywood Walk of Fame, located outside the Pantages Theatre at 6233 Hollywood Blvd. In 2009, the National High School Musical Theatre Award was established and named the Jimmy to celebrate his career-long dedication to supporting young talent.

In Chicago, he is responsible for bringing hundreds of shows to Chicago since 1954.  After creating Broadway In Chicago in 2000, he was able to lure long-run shows to Chicago beginning with the success of WICKED and its three-and-a-half-year run, followed by two and a half years of JERSEY BOYS, a year of LION KING, and many more and including the current run of HAMILTON for over two years. As a legendary theatrical producer, he was able to establish Chicago as a breeding-ground for Pre-Broadway including the premieres of THE PRODUCERS, SPAMALOT, MOVIN OUT, KINKY BOOTS, to name only a few, and most recently PRETTY WOMAN THE MUSICAL and TOOTSIE.  For more information about the Nederlander Organization or James M. Nederlander, visit www.nederlander.com

ABOUT BROADWAY IN CHICAGO
Broadway In Chicago was created in July 2000 and over the past 18 years has grown to be one of the largest commercial touring homes in the country.  A Nederlander Presentation, Broadway In Chicago lights up the Chicago Theater District entertaining over 1.7 million people annually in five theatres. Broadway In Chicago presents a full range of entertainment, including musicals and plays, on the stages of five of the finest theatres in Chicago’s Loop including the Cadillac Palace Theatre, CIBC Theatre, Oriental Theatre, and just off the Magnificent Mile, the Broadway Playhouse at Water Tower Place and presenting Broadway shows at The Auditorium Theatre of Roosevelt University. For more information, visit www.BroadwayInChicago.com.