CHICAGO THEATRES GET FESTIVE FOR
THE HOLIDAY SEASON
WITH TRADITIONAL FARE, CLASSICS WITH A TWIST,
COMEDY, DANCE, MUSICALS AND MORE 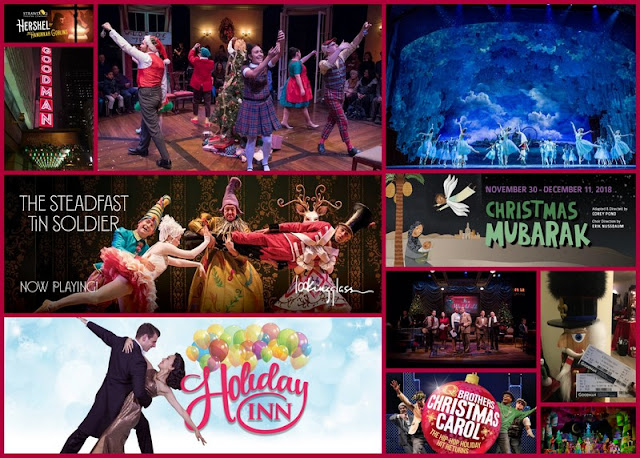 The Chicago theatre community will present a wide variety of festive plays, musicals, dance and comedy offerings this Holiday season.  In support, the League of Chicago Theatres will create its annual comprehensive Holiday Theatre Guide that will be available beginning in mid-November at hotels, theaters, events, and destinations across the Chicago area. An updated list of holiday shows with additional details about each production will be available throughout the season at ChicagoPlays.com. Additionally, many holiday shows will be available at Hot Tix, Chicago’s local, half-price ticketing service.

The heartwarming story of Ebenezer Scrooge comes to life in the Goodman Theatre’s A CHRISTMAS CAROL. A Chicago holiday tradition enjoyed by 1.5 million theatergoers over 4 decades. Runs through December 30.

Journey to Chicago’s 1893 World’s Fair with The Joffrey Ballet’s reimagined THE NUTCRACKER at The Auditorium Theatre. Runs December 1 - 30.

A wholly-original, ballet-free version of THE NUTCRACKER by The House Theatre of Chicago plays at the Chopin Theatre in Wicker Park. This heartwarming, darkly moving story of magic and hope is a fun outing for the whole family. Runs through December 30.

Emerald City Theatre and Broadway In Chicago’s holiday favorite ‘TWAS THE NIGHT BEFORE CHRISTMAS performs at the Broadway Playhouse. Runs through December 30.

Silk Road Rising premieres CHRISTMAS MUBARAK, a first-of-its-kind musical/theatre interplay of the Quranic and New Testament stories that celebrate the miraculous birth of Jesus as told by Muslims and Christians. Runs November 30 - December 9.

Barrel of Monkeys’ holiday special THAT’S WEIRD, GRANDMA RINGS IN THE HOLIDAYS returns to The Neo-Futuriarium with a mix of new and classic sketches written by Chicago Public School students. Runs December 10 - 22.

Mary Zimmerman’s THE STEADFAST TIN SOLDIER premieres at Lookingglass Theatre on Michigan Avenue. Telling the unlikely story of a tin soldier with dazzling image and movement. Runs through January 13, 2019.

Irving Berlin’s musical HOLIDAY INN opens at Marriott Theatre in Lincolnshire, telling the story of Jim, who leaves the bright lights of show business to settle down at a farmhouse in Connecticut...but life isn't the same without a bit of song and dance. Runs through January 6, 2019.

About Chicago theatre
Chicago theatre is the leader in the U.S. with more than 250 theatres throughout Chicagoland, comprising a rich and varied community ranging from storefront, non-union theatres to the most renowned resident theatres in the country, including 5 which have been honored with Regional Tony Awards, and the largest touring Broadway organization in the nation. Chicago’s theatres serve 5 million audience members annually and have a combined budget of more than $250 million. Chicago produces and/or presents more world premieres annually than any other city in the nation. Last year alone Chicago theatre companies produced more than 100 world premiere productions and adaptations. Each year Chicago theatres send new work to resident theatres across the country, to Broadway, and around the world.

The League of Chicago Theatres’ Mission Statement
Theatre is essential to the life of a great city and to its citizens. The League of Chicago Theatres is an alliance of theatres, which leverages its collective strength to support, promote and advocate for Chicago’s theatre industry. Through our work, we ensure that theatre continues to thrive in our city.
For a comprehensive list of Chicago productions, visit the League of Chicago Theatres website,  ChicagoPlays.com. Half-price tickets to the current week’s performances as well as future performances are available at HotTix.org and at the two Hot Tix half-price ticket locations: across from the Chicago Cultural Center at Expo72 (72 E. Randolph) and Block Thirty Seven (108 N. State).