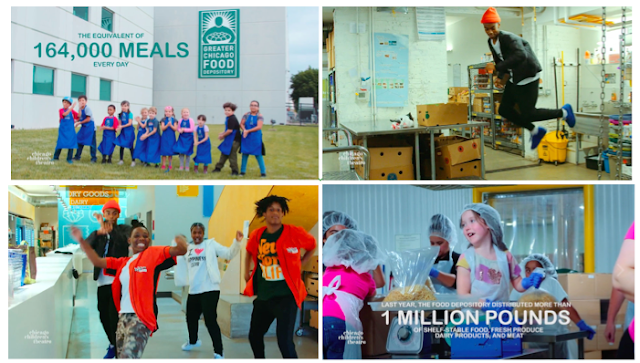 Here at ChiIL Mama, we love it when our favorites partner up together, especially when it means help for the vulnerable in our communities. Kudos to Chicago Children’s Theatre and the Greater Chicago Food Depository, with the support of The Chicago Community Trust, for their rockin' video campaign to encourage food donations and volunteer efforts!

In the PSA, 12 real Chicago kids selected from Chicago Children’s Theatre’s education program and fan base are shown sorting food, having fun, dancing and singing at the Greater Chicago Food Depository’s main donation and sorting facility on Chicago’s Southwest side. Additionally, The Happiness Club, a popular education programing partner at Chicago Children’s Theatre, dispatched some of its top youth performers to add exciting, eye-catching hip-hop choreography to the music video, filmed inside the Lakeview Pantry, a Greater Chicago Food Depository partner agency.


The PSA’s signature song, “Serving Up Love” by Motown legend Lamont Dozier and Paris Ray Dozier, also served as the final number in the musical Last Stop on Market Street. In fact, the final scene in Last Stop on Market Street turned out to be a community food bank, where a grandmother brought her grandson to teach him an important life lesson about supporting those experiencing hunger and food insecurity.

When Last Stop on Market Street debuted last May, the Chicago Tribune called it “…a kid’s version of In the Heights…a celebration of a neighborhood and all of its diverse characters.” In addition to its final scene set a in a food bank, Chicago Children’s Theatre’s West Loop home, The Station, also served as a drop-off location throughout the run of the show. The set design even featured an on-stage sign for the Greater Chicago Food Depository to subtly boost visibility for Chicago’s food bank.

Development and production of videos was supported by a $5,000 Acting Up award from The Chicago Community Trust. The idea for the “Serving Up Love” PSA was sparked last May during the Chicago Community Trust’s fifth annual On the Table series, which convenes Chicago-area residents in conversations to engage in meaningful dialogue, develop new relationships and inspire action to make a real difference in communities. The PSA is one of 37 projects to receive an Acting Up Award from the Trust to benefit neighborhoods and the public good. The PSA was directed and edited by Mike Meyer, MeyerFilm Inc., Chicago.

“Chicago Children’s Theatre is deeply grateful to The Chicago Community Trust for the Acting Up award and the opportunity it gave us to celebrate the intersection of the arts with area nonprofits to enact real community change,” said Jacqueline Russell, artistic director, Chicago Children’s Theatre. “Together, we are helping address poverty, making sure fewer of our neighbors are hungry, and demonstrating how much fun it can be to volunteer and make a difference.”

“Raising awareness is the first step towards ending hunger in our community,” said Kate Maehr, Food Depository executive director and CEO. “We’re grateful to the Chicago Children’s Theatre for getting involved by putting together a lighthearted and creative way to tell our story.”

In 2017, Chicago Children’s Theatre opened its first home, The Station, a performing arts and education center located in the city’s historic and re-emerging West Loop neighborhood. The Station is the former 12th district police station, and it is profound that a place once reserved for a very different purpose is now being used as a space for community, creativity and expression. The physical location of The Station is at the literal crossroads between the vibrant Loop and areas of poverty to the South and West, making it uniquely positioned to address critical community needs, and unite neighborhoods across the city.

Since its launch in 2005, CCT has cemented its reputation as the city’s largest professional theater company devoted exclusively to children and young families. The company evolved out of Chicago’s need for high-quality, professional children’s programming to match the quality and significance of powerhouses such as Steppenwolf Theatre Company, Goodman Theatre and Lookingglass Theatre. In 2017, Chicago Children’s Theatre became the first theater for young audiences in the nation to win a National Theatre Award from the American Theatre Wing, creators of the Tony Awards. For more, visit chicagochildrenstheatre.org.

The Chicago Community Trust, the region’s community foundation, partners with donors to leverage their philanthropy in ways that transform lives and communities. For the past century, The Chicago Community Trust has connected the generosity of donors with community needs by making grants to nonprofit organizations working to improve metropolitan Chicago. Since its founding in 1915, the Trust has awarded over $2 billion in grant funding to more than 11,000 local nonprofit organizations – including more than $300 million in 2017. For more, visit cct.org.
Posted by Bonnie Kenaz-Mara at 11:58 AM