ChiIL Live Shows On Our Radar:
Alice by Upended Productions
**Recommended for ages six and up**

Review:
A drag queen Red Queen in a flower shop, a disaster drill in a stairwell beneath a hidden mural, school angst tweedle dee and tweedle dum style, a torch-song midlife crisis, a poetic brewery basement adventure, ballet in a convenience store and more, await patron on this utterly unique journey. 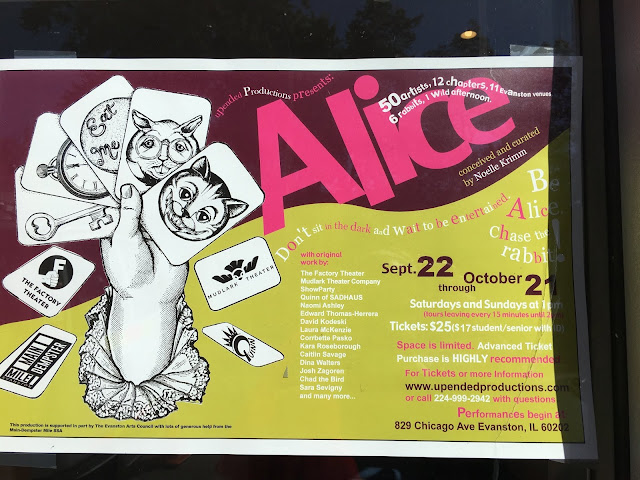 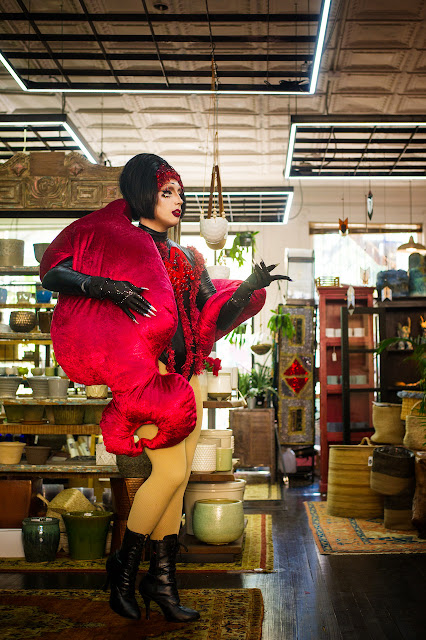 For Chapter 8, Quinn of SADHAUS is The Queen in a red wrap at Cultivate: An Urban Rainforest.
Alice by Upended Productions; Photos by Jenn-Anne Gledhill

My 17 year old son and I caught opening weekend, September 23rd, and the show made such a big impression it spawned a college app short answer question where my son declared the character he'd most like to meet is The Cheshire Cat, because of his convoluted logic. We thoroughly enjoyed becoming Alice and following the white rabbit into a theatre filled, alternate Evanston. 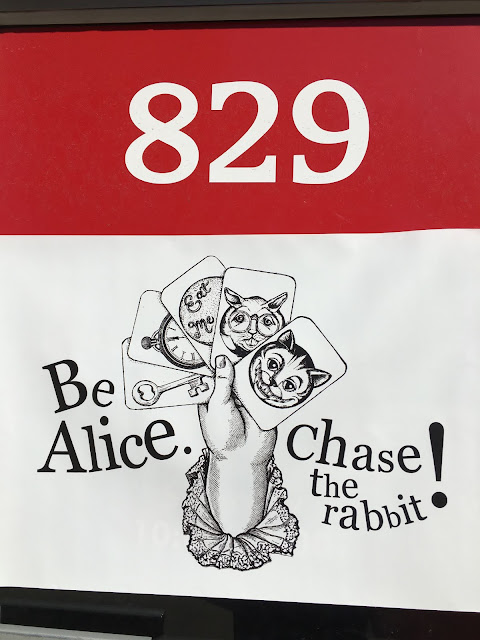 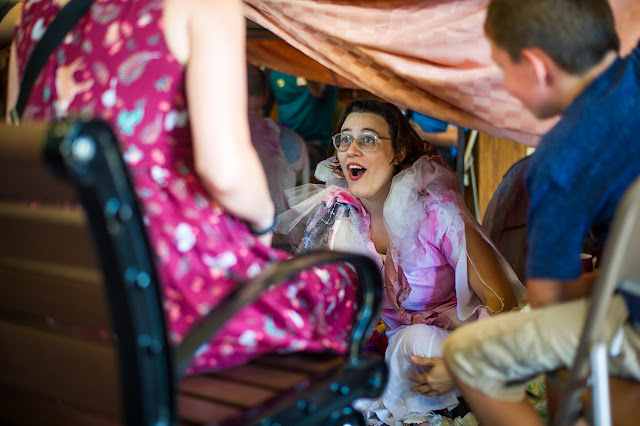 We were particularly enamored with the surreal hatchback car film and the train platform tea party with real tea. This playful, participatory production manages to be at once vibrantly original and true to the spirit of the original books, full of deep wisdom couched in delicious absurdity and child's play. The collaborative  nature of this show, involving so many different theatre companies and Evanston businesses, is amazing. 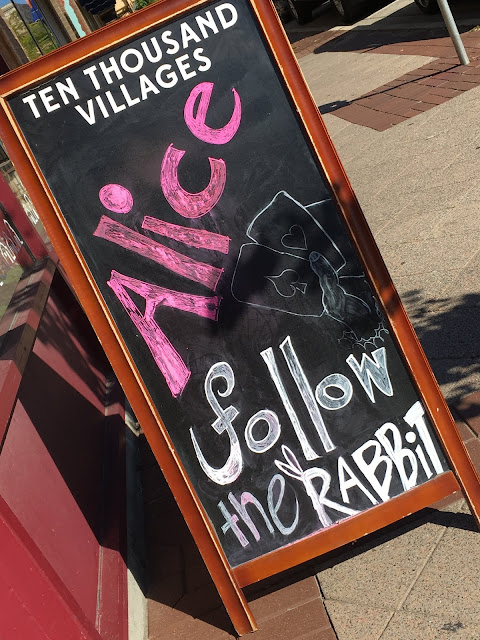 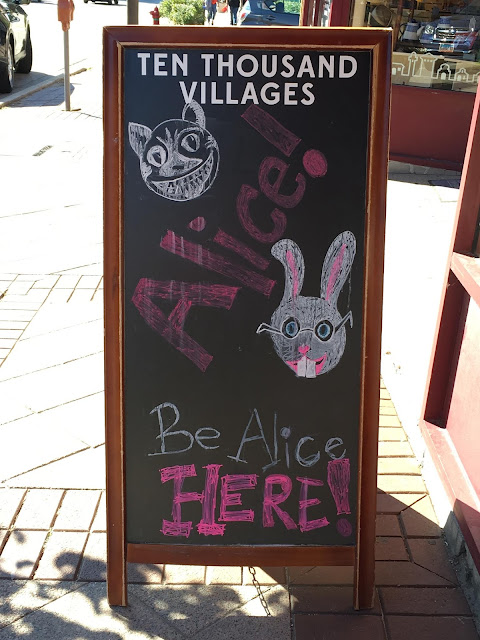 Photos by B. Kenaz-Mara for ChiILMama.com 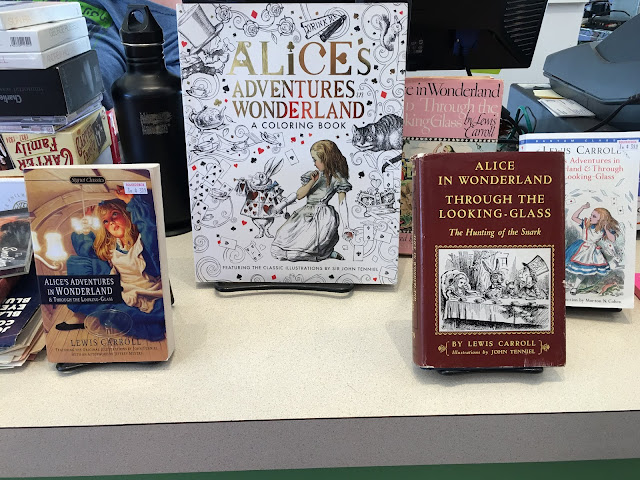 Though officially listed for ages 6 and up, there were few elementary age children in our group, though the kids seemed to be enjoying themselves. Overall, I'd say it's geared for teens and up. Most of the costumes are minimal and monologues deep, so younger children might be confused and frustrated, but it's a delight for adults. 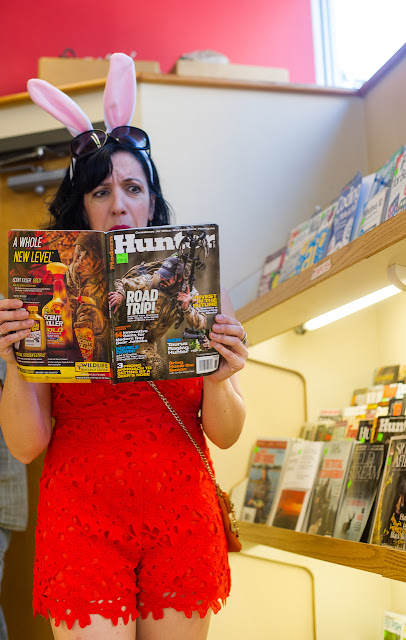 Factory Theater ensemble member Corrbette Pasko as the Rabbit is disturbed by reading material at the Chicago-Main Newsstand. Alice by Upended Productions; Photos by Jenn-Anne Gledhill

Also note, this production does require quite a bit of quick walking, lots of standing, and several sets of stairs, if you have ambulatory issues. 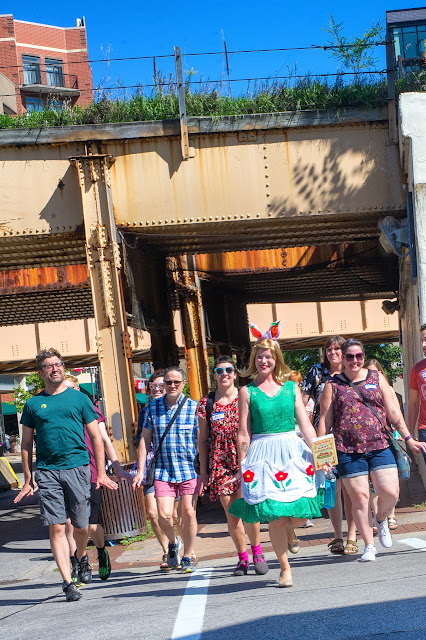 Also, if you're coming up from Chicago, leave more than plenty of extra time, beyond what your maps app says, or you'll be running in as frazzled as the chronically late rabbit, and may miss your group's departure time! If it's sold out and you've been unable to get tickets, show up and you may get lucky and be able to join in on the spot if there are no-shows.

The goody bags at the close, with local coupons, were a nice surprise as well. I went back and enjoyed a tasty local microbrew with my "wooden nickle" dollar off coin while I contemplated the show. Upended Productions' Alice is a fabulously fun community collaboration. Highly recommended. 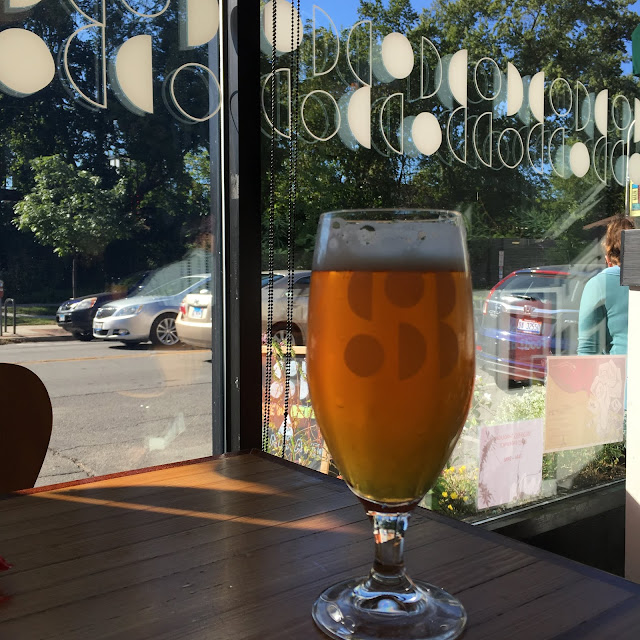 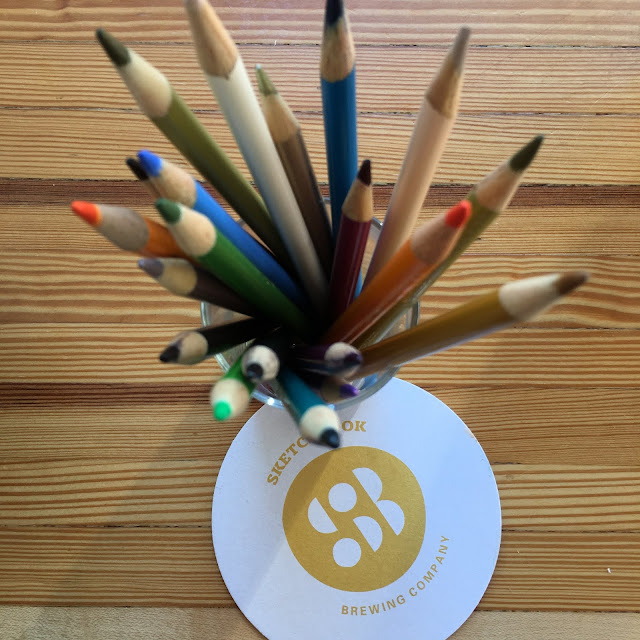 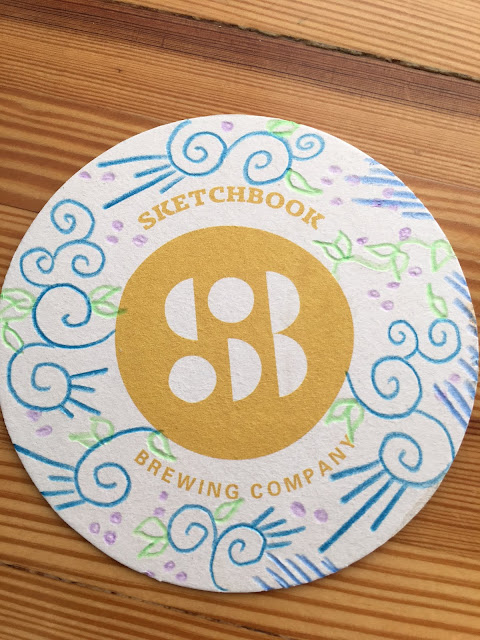 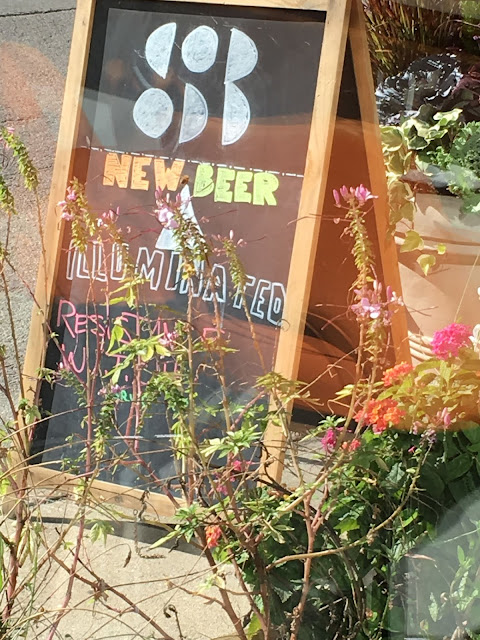 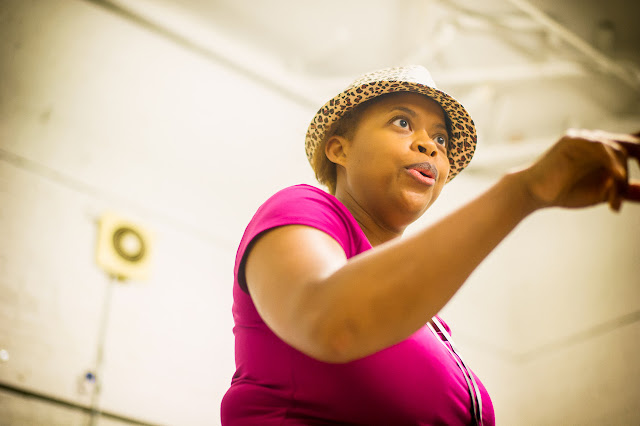 The Factory Theater’s Risha Hill covers Chapters 2 and 3 of the adventure
in the canning/barrel room at Sketchbook Brewing Co.
Alice by Upended Productions; Photos by Jenn-Anne Gledhill 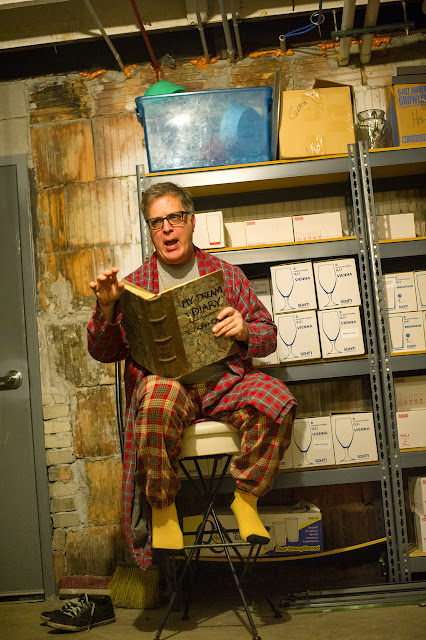 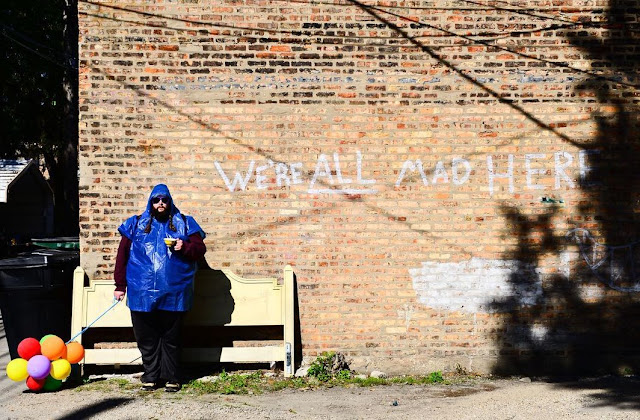 “ALICE displays impeccable logistical skill and a striking sense of space; in the best environmental theater tradition, it renews the audience's sense of wonder at their surroundings” – Newcity Stage (2014)

Ducking into storerooms and back patios, through bookstores and breweries, the audience IS Alice and southeast Evanston becomes a wonderland. 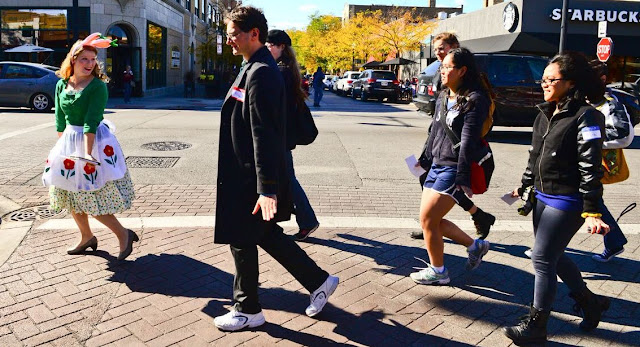 TICKETS:
$25 for single tickets; $17 for students and seniors with ID
Space is limited so advance purchase is highly recommended: www.UpEndedProductions.com

FUNDER:
This project is partially supported by a grant from the Evanston Arts Council, an agency supported by the City of Evanston.

HISTORY:
Neo-Futurist alumna Noelle Krimm founded Upended Productions in 2014. Productions are not confined to conventional theater spaces to provide performance frameworks for artists of all disciplines to come together and create unexpected, innovative, multi-disciplinary work. Shows are performed in and around local neighborhoods, surprising and delighting audiences, bringing visibility and vitality to community businesses.