EMBRACE YOUR INNER ELF AT PARAMOUNT THEATRE’S
ELF THE MUSICAL,
A HILARIOUS HOLIDAY COMEDY
FOR THE ENTIRE FAMILY, NOV. 22-JAN. 7 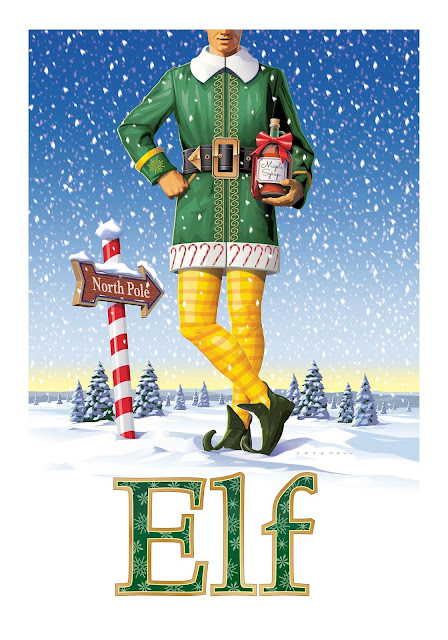 Everybody’s favorite overgrown elf, Buddy, will be making mischief and Christmas cheer this holiday season when Paramount Theatre in downtown Aurora presents Elf The Musical, November 22, 2017-January 7, 2018. Based on the hilarious 2003 Will Ferrell movie, Elf is one of those rare holiday shows that will have both kids and adults laughing, humming tunes like “A Christmas Song” and “Sparklejollytwinklejingley” for days and rediscovering what it means to be a family.

Director Amber Mak is back to direct and choreograph Paramount’s big, brassy staging of this hilarious fish-out-of-water holiday comedy, her third Paramount musical following her memorable stagings of Disney’s The Little Mermaid last season and Hairspray - The Broadway Musical in 2016. And with a two-story Christmas tree in the center of Paramount’s lobby, thousands of sparkling lights adorning the banisters and carolers filling the air with song, Paramount has become the place where families head for unforgettable holiday experiences. So join the Paramount family this holiday season for the perfect feel-good show that will turn even the grumpiest of grinches into a happy-go-lucky bearer of Christmas cheer, singing loud for all to hear.

Exceptions: There are four added performances during the run: Thursday, November 30 at 1:30 p.m., Tuesday, December 12 at 7 p.m., Friday, December 22 at 1:30 p.m., and Thursday, January 4 at noon. Show time for the evening performance on January 4 is 5 p.m. rather than 7 p.m. No matinee Wednesday, November 22. No show Thursday, November 23 (Thanksgiving). No 5:30 p.m. show Sunday, December 24 (Christmas Eve). Elf The Musical is rated G. Single tickets are $36 to $74. The Paramount Theatre, 23 E. Galena Blvd. in downtown Aurora, is surrounded by affordable parking and a variety of restaurants for pre- or post-show dining.

For subscriptions and single tickets, visit ParamountAurora.com, call (630) 896-6666, or stop by the Paramount box office Monday through Saturday, 10 a.m. to 6 p.m., and two hours prior to evening performances.

Behind the scenes of Paramount’s Elf The Musical
If you’ve ever felt like you don’t belong, just be glad you’re not William “Buddy” Hobbes. When he was a baby, Buddy crawled into Santa’s sack of presents and was whisked away to the North Pole, where he lived as an elf for years. Buddy took joy in doing elf things, like making toys. But there was always something off. He towered over his fellow elves and just didn’t get cobbling. When Buddy learns he’s human, he goes in search of his father, a workaholic New York City publisher.

Imagine Buddy’s horror when he finds out his real dad couldn’t care less about Christmas. But that won’t deter the infectiously cheerful wannabe elf from changing people’s hearts and minds. Based on the cherished 2003 New Line Cinema hit written by David Berenbaum, Elf The Musical features songs by Tony Award nominees Matthew Sklar and Chad Beguelin (Disney’s Aladdin on Broadway, The Wedding Singer), with a book by Tony Award winners Thomas Meehan (Annie, The Producers, Hairspray) and Bob Martin (The Drowsy Chaperone). Elf The Musical was originally produced by Warner Bros. Theatre Ventures in association with Unique Features. It ran on Broadway in the Christmas seasons of 2010-11 and 2012-13 and toured the U.S. in 2012 and 2014.

Amber Mak (director/choreographer) directed and choreographed Paramount’s acclaimed productions of Disney’s The Little Mermaid in 2016, and Hairspray – The Broadway Musical in 2016. Soon after Hairspray, Mak was hired as Paramount’s full-time New Works Development Director, foretelling an exciting new era of artistic and economic expansion for Paramount. Previously, she also was assistant director and associate choreographer of Paramount’s 2014 smash hit Mary Poppins, and she played Bombalurina in Cats. Prior to joining Paramount, Mak was founding artistic director of Chicago’s FWD Theatre Project, which collaborated with Claude-Michel Schönberg and Alain Boublil, co-creators of Les Misérables and Miss Saigon, on a concert reading and English premiere of La Révolution Française. Mak also served as Assistant/SDC Observership Fellow for Susan Stroman for Big Fish in Chicago and on Broadway, and she was Jeff-nominated for her choreography of Singin’ in the Rain at Drury Lane Oakbrook. Regional credits include director/ choreographer of Mary Poppins and Swing and choreographer for Legally Blonde and The Sound of Music, all at The Little Theatre on the Square, choreographer of How to Succeed in Business Without Really Trying at Rocky Mountain Rep and The Music Man at The Clarence Brown Theatre. Her credits as associate director/choreographer include The Sound of Music, Ragtime, Mary Poppins, Sweeney Todd, Xanadu, Shout and The Emperor's New Clothes. As a performer, she has been on stage in more than 40 shows nationally including Cabaret, West Side Story, Crazy For You and Thoroughly Modern Millie.

More about Paramount’s 2017-18 season
Following Elf The Musical, Paramount’s 2017-18 Broadway Musical Series continues with Cabaret, one of the most well-known Broadway musicals of all time, world-famous for its extraordinary songs, universal appeal and spellbinding story that still rings true today. Tapped for her Paramount directing debut is one of Chicago theater’s top up and comers, Katie Spelman, Jeff-nominated for her innovative choreography of Paramount’s Oklahoma! in 2015. Performances are February 7–March 18, 2018. Press opening is Saturday, February 10 at 8 p.m. Paramount’s 2017-18 season finale is the first Chicago-area regional production of Once, the 2012 Broadway smash hit and winner of eight Tony Awards, including Best Musical. Paramount Artistic Director Jim Corti will stage this modern-day musical about an Irish busker, his immigrant fan and their eventful week in Dublin as they write, rehearse and record songs from which their beautiful love story unfolds. Performances are April 25-June 3, 2018. Press opening is Saturday, April 28 at 8 p.m. Paramount’s 2017-18 performance schedule also boasts performances by some of the biggest names in show business. Tickets are also on sale for STOMP (November 1), Ballet Folklorico Quetzalcoatl (November 3), An Intimate Evening with Kristin Chenoweth (November 4), Unforgettable: Falling in Love with Nat King Cole featuring Evan Tyrone Martin (Jesus in Paramount’s 2017 smash hit Jesus Christ Superstar, November 5), comedian and impersonator Frank Caliendo (November 10), The Second City’s Non-Denominational Christmas Show (December 1-23 in the Copley Theatre), Elvis Tribute Artist Spectacular: The Birthday Edition (January 11), Las Vegas’s #1ventriloquist Terry Fator (January 20), the incredible magic of Penn & Teller (March 23, sold out!), Chicago’s own Jersey boys Under the Streetlamp (two shows, March 24), country music star Scotty McCreery (March 25), Shen Yun 2018 (April 5-8), late night comedy legend Jay Leno (April 13), Judy Garland: Come Rain or Come Shine featuring Angela Ingersoll (June 10) and the world’s #1 Bee Gees tribute band Stayin’ Alive (June 15). For tickets, subscriptions and more information, go to ParamountAurora.com, call (630) 896-6666, or stop by the Paramount Theatre, 23 E. Galena Blvd. in Aurora. About the Paramount Theatre The Paramount Theatre (ParamountAurora.com), 23 E. Galena Blvd. in the heart of downtown Aurora, is the center for performing arts, entertainment and arts education in the second largest city in Illinois. The 1,888-seat Paramount Theatre is nationally renowned for the quality and caliber of its presentations, historic beauty and superb acoustics. Designed by renowned theater architects C.W. and George L. Rapp, the Paramount Theatre is graced with a beautiful Venetian decor with a strong 1930s Art Deco influence. The Paramount opened on September 3, 1931. It was the first air-conditioned building outside of Chicago, and presented "talking pictures," vaudeville, concerts and circus performances for over 40 years.  In 1976, the Aurora Civic Center Authority (ACCA) restored the Paramount to its original grandeur. The Paramount Arts Centre reopened in 1978, offering a variety of touring theatrical, musical, comedy, dance and family programming. In 2006, a 12,000-square-foot, two-story Grand Gallery lobby was added including a Grand Staircase, new box office, café and art gallery. In 2010, ACCA hired Tim Rater as President and CEO of the Paramount Theatre. Rater’s mission was to radically boost the theater’s programming and audience base by transforming the Paramount into one of Chicago’s top self-producing, professional Equity musical theaters. Rater hired award-winning Chicago director Jim Corti as the Paramount’s first-ever artistic director. In 2011, the Paramount introduced its inaugural four-play Broadway Musical Series with Corti’s critically acclaimed production of My Fair Lady. In just six blockbuster seasons, Paramount has leaped to the top of Chicago’s musical theater scene, winning unanimous audience and critical acclaim, and an unprecedented number of Joseph Jefferson nominations and awards, including Best Musical-Large for the past two consecutive seasons. Today, more than 33,000 subscribers from throughout the city and suburbs enjoy Paramount’s Broadway-quality productions at highly affordable prices, making the Paramount the third largest subscription house in the nation. In addition to its blockbuster Broadway musical series, Paramount continues to present an eclectic array of internationally known comedians, music stars, dance events and family shows, and on most Mondays, screens a classic movie for just $1. The Paramount Theatre is one of three live performance venues programmed and managed by the ACCA, which also oversees the Paramount’s “sister” stage, the intimate, 173-seat Copley Theatre located directly across the street from the Paramount at 8 E. Galena Blvd., as well as RiverEdge Park, downtown Aurora’s summer outdoor concert venue at 360 N. Broadway. The Paramount Theatre continues to expand its artistic and institutional boundaries under the guidance of Tim Rater, President and CEO, Aurora Civic Center Authority; Jim Corti, Artistic Director, Paramount Theatre; a dedicated Board of Trustees and a devoted staff of live theater and music professionals. For more, visit ParamountAurora.com or call (630) 896-6666.
Posted by Bonnie Kenaz-Mara at 9:25 AM