Lookingglass Theatre Company Presents
Its Award-Winning, Circus-Infused Production of
Hard Times
Adapted and Directed by Ensemble Member Heidi Stillman
From the Book by Charles Dickens
In Association with The Actors Gymnasium 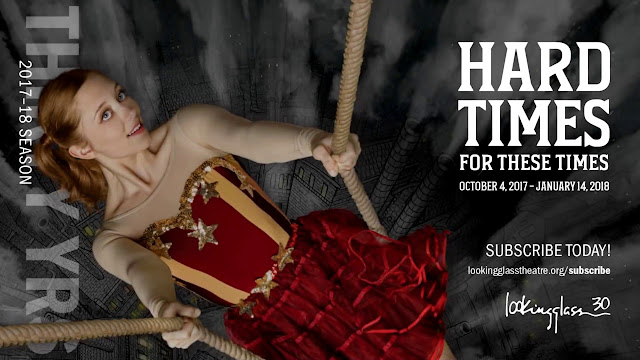 In a Chicago theatre season that's off to a roaring start, with a plethora of world class options, I have to say Lookingglass Theatre's Hard Times remount, directed by Heidi Stillman, is at the top of my must see list. I missed their award winning, highly acclaimed first run of Hard Times in 2001 and am eagerly anticipating catching the press opening with the family on October 14th. Check back soon for our full review.

A Dickensian carnival of characters inhabits the streets of smoke-choked Coketown: grim Mr. Gradgrind’s school churns out joyless students; poor Stephen Blackpool toils in the nearby mines; and mill-owner Mr. Bounderby, full of bluster and bombast, presides over it all. Only when a traveling circus alights nearby, and young orphan Sissy Jupe enters their world, does a ray of hope shine through. Artistic Director Heidi Stillman adapts and directs this timeless love-letter to the power of beauty, hope, and imagination.

Heidi Stillman—in her finest, most nuanced work as both adapter and director—has crafted a show of tremendous grace and heart, darkness and light. She has brought to life a Victorian-era epic that bursts with wit and whimsy, and all the outrage, hope, severity, and sentimentality of the novel.
– Chicago Sun-Times

As brilliantly conceived as any Dickens stage adaptation I have ever seen. It’s a tribute not only to the glory of Dickens, but to the joy of theater.
– Chicago Tribune

*There are additional performances on Friday, November 24 and Wednesday, December 27 at 2:00 p.m.

About the Artists
HEIDI STILLMAN (Adaptor/Director/Artistic Director/Lookingglass Ensemble Member) has both written and directed productions for Lookingglass including: Cascabel (in collaboration with Tony Hernandez and Rick Bayless), The North China Lover, Hephaestus (in collaboration with Tony Hernandez), The Brothers Karamazov (2009 Raven Award), Hard Times (five Jeff Awards including Director, New Work, and Production; also produced at Arden Theatre Company in Philadelphia), and The Master and Margarita (Jeff Nominated). Additional writing credits with Lookingglass include: The Last Act of Lilka Kadison with Nicola Behrman, David Kersnar, Abbie Phillips and Andy White, The Old Curiosity Shop with Laura Eason and Raymond Fox (Jeff Award for Adaptation), and The Baron in the Trees with Larry DiStasi (Jeff Nominated). Directing work with Lookingglass includes: Death Tax, Bengal Tiger at the Baghdad Zoo, Trust, The Wooden Breeks, and Hillbilly Antigone. Heidi’s adaptation of The Book Thief premiered at Steppenwolf Theatre Company. She directed Minita Gandhi’s Muthaland for Silk Road Rising Solos and Victory Gardens’ Ignition Festival, CAATA/ConFEST, and at 16th Street Theatre. Most recently, she co-wrote and directed The Year I Didn’t Go to School at the Chicago Children’s Theatre.

AUDREY ANDERSON (Sissy) is making both her Lookingglass and Chicago professional debut in Hard Times. Born and raised in Minneapolis, Audrey moved to Chicago to study theatre at Loyola University where she is currently a senior. She has performed with numerous Minneapolis professional companies, including Children’s Theatre Company and Classical Actors Ensemble, along with many collegiate productions while attending Loyola University, a few being columbinus, Elephant’s Graveyard, and FML: How Carson McCullers saved my life. Audrey learned to ﬂy at Xelias Aerial Arts in Minneapolis, and continued her studies at The Actors Gymnasium upon moving to Chicago.

ATRA ASDOU (Rachael, Mrs. Gradgrind, Scherezade beginning Dec. 19/Lookingglass Artistic Associate) returns to Lookingglass now as an Artistic Associate, last appearing in Blood Wedding and Bengal Tiger at the Baghdad Zoo. Past performances include: 1984 (Steppenwolf for Young Adults), A Christmas Carol (Goodman Theatre), Heartbreak House (Writers Theatre), Dirty (The Gift Theatre), Seminar (Haven Theatre), and Inana (TimeLine Theatre). She is a graduate of Loyola University, Second City (where she is an understudy to the touring company), and iO (where she is on the Harold team, Lil’ Tooties, and an ensemble member of Whirled News Tonight).

DAVID CATLIN (Mr. Sleary, Stephen Blackpool/Lookingglass Ensemble Member)’s Lookingglass acting credits include: The Arabian Nights, Our Town, Argonautika, Summertime, La Luna Muda, Manuscript Found at Saragossa, The Vanishing Twin, The Scarlet Letter, The Odyssey, and The Jungle. Other Chicago performance credits include: Marnie & Phil: A Circus Love Letter, Lost & Found: A Recycled Circus and All the Time in the World (The Actors Gymnasium); The Elephant & The Whale (Chicago Children’s Theatre/Redmoon Theater); The Nutcracker (The House Theatre of Chicago); The Midnight Circus. David is an artistic associate with The Actors Gymnasium and serves on the acting faculty for Northwestern University.

RAPHAEL CRUZ (Bitzer, Le Papillon), a native of San Francisco, began his journey into the circus arts at age six.  Specializing in traditional Chinese acrobatics he studied with the Founder of the Nanjing acrobatic troupe, Master Trainer Lu Yi. At the age of 15, furthered his training at The National Circus School of Montreal. He specialized in Hand to Hand and after graduating, he became an original member and artistic collaborator of The 7 Fingers production of Traces. Raphael also studied music extensively and plays several instruments, which helped him land the role Buster in Cirque du Soleil’s production of Iris (2012) in Los Angeles. Other credits include: Assistant Choreographer for the opening ceremonies of the Sochi Olympics; Associate Acrobatic Designer for Cirque du Soleil’s Broadway production Paramour. Raphael is also a cast member of French contemporary dance company DCA’s latest production Courte Pointe.

CORDELIA DEWDNEY (Louisa) returns to Lookingglass after this summer’s Moby Dick. She has worked with Alliance Theatre, Arena Stage, and South Coast Repertory for the National tour of Moby Dick and has appeared on Chicago Med. Cordelia is a graduate of Northwestern University with degrees in Theatre and English.

LOUISE LAMSON (Rachael, Mrs. Gradgrind, Scherezade through Dec. 17/Lookingglass Ensemble Member) returns to the Lookingglass stage and to Hard Times, where she originated the role of Louisa Gradgrind. Other Lookingglass credits include: The Idiot, The Secret in the Wings, The Wooden Breeks, Icarus (The Getty Villa, LA), The Brothers Karamazov, Our Town, The Arabian Nights, Ethan Frome, Metamorphoses, The Little Prince, and most recently Death Tax. Other Chicago credits include: About Face Theatre’s Bash (After Dark Award and Jeff Award Nomination) and The Odyssey (Goodman Theatre). New York credits include: Metamorphoses (Second Stage Theatre and Broadway) and The Notebooks of Leonardo da Vinci (Second Stage Theatre). Louise is a graduate of Northwestern University. She joined the ensemble in 2016.

JJ PHILLIPS (Tom) returns to Lookingglass where he previously appeared as Kev in Bengal Tiger at the Baghdad Zoo (Jeff Award Nominee, Actor in a Supporting Role—Play), as well as Paolo in The North China Lover, and the understudy for Ian in last season’s Beyond Caring. Chicago: Steppenwolf Theatre Company (Next up: Fat Pig, Leveling Up), The House Theatre of Chicago (The Hammer Trinity), Griffn Theatre (Punk Rock). Regional: Milwaukee Repertory Theater, Milwaukee Chamber Theatre, Adrienne Arsht Center for the Performing Arts (Miami). Film/TV: Chicago Fire, Thrill Ride, and the upcoming web series Kappa Force and Blame It On Toby.


REFLECT Panels
Lookingglass’ REFLECT Series is a curated selection of post-show discussions featuring panelists with a range of viewpoints and expertise on the content and context of each production. These wide-ranging conversations, moderated by artistic staff, offer an opportunity for Lookingglass audiences and guests to engage with the vision and visionaries behind each show, get a behind-the-scenes glimpse at the unique Lookingglass process, and hear from artists, academics and authorities with diverse perspectives on the material.

REFLECT post-show panel discussions take place directly following the 2:00 p.m.­ matinee on select Sundays at Lookingglass Theatre. The discussions are free and open to the public.

October 22:  Hard Times/These Times: Hard Times for Truth
With scientific data being questioned and the recent emergence of “alternative facts,” how do we determine the lines between fact and opinion, speculation and lie? Tackle this quandary with Lookingglass Artistic Director and Hard Times adaptor and director Heidi Stillman, and the Raven Foundation’s Andrew McKenna.

October 29:  Hard Times/These Times: The World of Work
The Industrial Revolution transformed Dickens’ England, with new technologies bringing new jobs for some and eliminating others. How is the Information Age similarly changing our world today?

November 12:  Hard Times/These Times: A Matter of Power
With income inequality on the rise and an increasingly polarized body politic, how do class, gender, race and other dividing lines intersect and align to keep us apart?

December 3:  Hard Times/These Times: Behind the Scenes
Join Hard Times artists for a peek behind the curtain at the genesis of the production, and how it has changed from 2001 to 2017.

December 10:  Hard Times/These Times: Charles Dickens and The Holiday Spirit
In Chicago and cities across the country, A Christmas Carol is an annual seasonal offering. What is it about Dickens’ works that uniquely lends itself to holiday fare?

Theatre Night Out for Young Professionals – Thursday, November 30, 2017
Join members of the Lookingglass Associates Board and other young professionals for a pre-show reception at Theory (9 W Hubbard St) and a performance of Hard Times. lookingglasstheatre.org/under35 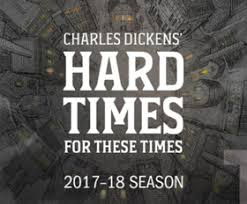 Subscriptions
Subscriptions are on sale for the 2017–2018 Season. Performances will be held at Lookingglass Theatre Company, located inside Chicago's historic Water Tower Water Works, 821 N Michigan Ave at Pearson.

The Gglasspass is a flex pass available to all ages. For $150, Gglasspass holders receive 3 tickets that can be used in any combination and denomination for any Lookingglass production in the 2017–2018 Season.

Subscription benefits include access to the best seats in the house, pre-sale opportunities and savings before single tickets go on sale to the general public, special perks at restaurant partners, unlimited ticket exchanges, discounted parking at the nearby John Hancock Center, Water Tower Place and Olympia Centre Garage, reduced tuition for Lookingglass’ renowned classes and summer camps, and access to exclusive subscriber-only events. For season subscription and ticket information, call the Lookingglass Theatre box office at (312) 337-0665 or visit lookingglasstheatre.org.