ADULT NIGHT OUT: THE WORLD PREMIERE OF THADDEUS AND SLOCUM: A VAUDEVILLE ADVENTURE AT LOOKINGGLASS THEATRE 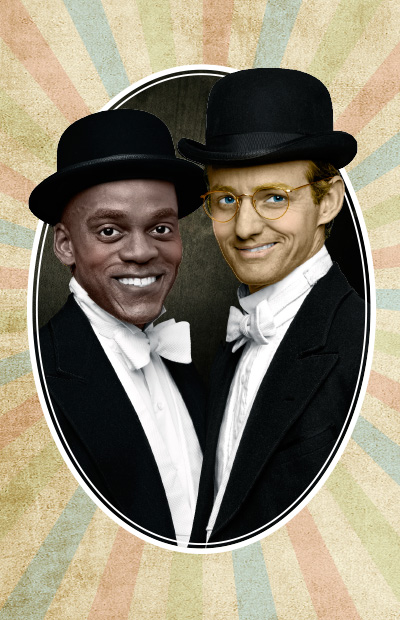 It’s 1908 and Chicago’s Majestic Theatre is the jewel of the vaudeville circuit. The only thing stopping Thaddeus and Slocum from becoming the next great stage act is as simple – and complicated – as black and white. Will laughter triumph and friendship endure as racial boundaries threaten to destroy their dreams of making the “big time?” Lookingglass dives deep into the divided heart of American show biz for a daring cavalcade of slapstick, song and dance, and burlesque as two best friends risk everything to make it to the top together.

Location: Lookingglass Theatre Company, located inside Chicago's historic
Water Tower Water Works, 821 N. Michigan Ave. at Pearson.
Prices:
Previews are $20 - $40
Regular Run is $40 - $75
Cabaret Pit Seats are $20 for patrons under 35 years old
Cabaret Pit Seating: For this production, Lookingglass designers recreated a Vaudeville theater, complete with a “cabaret pit” surrounding the stage. Patrons in these seats will be part of the show, seated in wooden chairs with actors constantly moving around them. For the under 35 crowd, these seats are just $20. Patrons must present ID when picking up tickets.

“Thaddeus and Slocum has been developed over the last few years at Lookingglass, and we have watched its growth with excitement and anticipation,” comments Artistic Director Heidi Stillman. “The play is both thoroughly relevant and an old-time show business adventure; at once a comedy and deadly serious. We’re so excited to see the singular voice of our Ensemble Member Kevin Douglas, his utterly unique and daring vision, and his bold tackling of subject matter that lies at the divided heart of American culture on our stage.”

“I grew up watching old comedies and movie musicals. As I got older, I began to realize that most of the people in these movies didn’t look like me, except for slaves, maids, butlers and Sidney Potier,” says playwright Kevin Douglas. “When I started to consider what it would look like to create a comedy, set in Chicago during the height of the Vaudeville era that featured a black lead (who wasn’t a slave or in a position of servitude), Thaddeus and Slocum was born. The play deals with provocative topics like racism, inequality and blackface. Blackface was common in the Vaudeville circuit in 1908. White people who wore blackface in the early 20th century wore it because they were imitating black people; it was an instance of appropriation. Many black entertainers of the period wore it because they wanted to take it back—re-appropriation. Many blacks didn’t want to wear it, but they dreamed of working in Vaudeville and that was one of the few ways into the industry. In writing these issues into the script, I wanted the play to be historically accurate and reflect social norms and the cultural climate of the era. I didn’t want to sugarcoat it.”

About the Artists
KEVIN DOUGLAS (Playwright/Ensemble Member) has been a Lookingglass Theatre Company Ensemble Member since 2013. He has performed in numerous Lookingglass productions, including: Black Diamond, Lookingglass Alice, Around the World in 80 Days (Jeff Nomination for Best Supporting Actor), Our Town (Co-Directed by Anna D. Shapiro and Jessica Thebus), The Great Fire, and Mr. Rickey Calls a Meeting (Jeff Nomination for Best Ensemble). Kevin has written a number of sketch comedy shows, including: Blaxploitation: The Remix and Blaxploitation 2: You know how we deux!, No Experience Necessary, and Reality Check, which he also co-directed. Kevin co-wrote an independent film that is in post-production, titled Call Center.

J. NICOLE BROOKS (Director/Ensemble Member) directs this new work for Lookingglass alongside Krissy Vanderwarker and Kevin Douglas. As a director Nicky has staged critically-acclaimed productions of Black Diamond: The Years the Locusts Have Eaten and Mr. Rickey Calls a Meeting, and was associate director to David Schwimmer for Laura Eason’s Sex With Strangers. She is a published author (Black Diamond; Bloomsbury Publishing and recently Fedra; University of Wisconsin–Madison) with several commissions in development, including the untitled Yuri Kochiyama project, Her Honor Jane Byrne, and Brer Rabbit. Recent acting credits include: Tina in Death Tax at Lookingglass Theatre with Deanna Dunagan, and Nina in Immediate Family directed by Phylicia Rashad. Nicky is native to Chicago, but also lives in Los Angeles and Brooklyn.

KRISSY VANDERWARKER (Director) is a freelance director and the Co-Artistic Director of Dog & Pony Theatre Co. (D&P). D&P directing credits include Breach, Counterfeiters, The Dinner Party Project, God’s Ear, As Told by the Vivian Girls, Mr. Marmalade, Ape, Osama the Hero, Crumble (Lay Me Down, Justin Timberlake) and As Much As You Can. Other professional directing credits include: Harry & The Thief (Pavement Group); The Grown-Up (Shattered Globe Theatre); Bethany (First Look/Steppenwolf Theatre Company); As Fat As You Can (Next Theatre Company); CLEAR, What Once We Felt (About Face Theatre); and As Much As You Can (Hendel Productions West). She graduated with her MFA in Directing from The Theatre School at DePaul University and is currently on faculty.

MOLLY BRENNAN (Abby/Sarah) is an actor, singer and clown. She returns to Lookingglass where previously she has played a Red Queen and a Pirate. In addition to performing Off-Broadway in NYC, she has worked at Second City, Lyric Opera, Steppenwolf Theatre Company, Goodman Theatre, Red Tape Theatre, About Face Theatre, Factory Theater, House Theatre and 500 Clown. She was most recently seen in the Neo-futurists’ Pop Waits, an original devised CLQWN MUTINY piece with pARTner Malic White. She performs at Salonathon, co-curates the Kinky Butch Witching Hour and sings with Mainstream Velour.

LAWRENCE E. DISTASI (Frank/Ensemble Member) last appeared onstage at Lookingglass as Long John Silver in Mary Zimmerman’s Treasure Island. He is a co-founder of The Actors Gymnasium Circus and Performing Arts School as well as an Ensemble Member and co-founder of Lookingglass Theatre Company. Larry has performed in over 30 Lookingglass productions, among them the Tony Award-winning production Metamorphoses, and the Jeff Award-winning productions Lookingglass Alice, The Arabian Nights and Hard Times. He directed and adapted The Baron in the Trees, for which he received a Jeff Nomination in Adaptation. Larry has appeared on television, in film and in a Philip Glass Opera called Galileo Galilei. He received his B.A. in Theatre from Northwestern University.

TOSIN MOROHUNFOLA (Zeke) is the founder of the Multicultural Theatre Initiative, where he served as Artistic Director for two years, including producing four of his own original plays. His stage appearances include Goodman Theatre, Northlight Theatre, New Victory Theater (Off-Broadway), Court Theatre, Unicorn Theatre, Creede Repertory Theatre, Heart of America Shakespeare Festival and the Coterie Theatre, where he was Resident Artist for two years. In 2014, Tosin was honored with “Best Supporting Actor” from the Black Theater Alliance for his role in The Gospel of Lovingkindness at Victory Gardens Theater. In 2015 he wrote and directed his own film, On Sight. Other films include: Destination Planet Negro and If Night Comes. On television, he’s appeared on Chicago Med (NBC), Empire (FOX) and Chicago Fire (NBC). Tosin’s also a member of Those People Comedy, and represented by Stewart Talent Chicago.

MONICA RAYMUND (Isabella through 7/17) stars as Gabrielle Dawson in NBC’s Chicago Fire. A graduate of The Juilliard School, she starred for three seasons on the FOX drama Lie to Me. Other notable credits include Happy Baby and Arbitrage, as well as a recurring role on The Good Wife. Monica starred in the musical Like Water for Chocolate (Sundance Theatre Lab) and Boleros for the Disenchanted (Huntington Theatre Company). Monica is the founder and president of SISU Theatrical Productions, a director for the upcoming campaign The Hidden Tears Project, and is also on the board of MOGUL, an online news aggregator and publishing platform for women.

Audience Engagement and Public Programs
Lookingglass has put together a coalition of individuals and organizations to design programming and content that will explore the racial and social issues presented in Thaddeus and Slocum and expand our understanding of the world of 1908 and our current realities of 2016.

These include:
Facilitated post-show discussions with the audience after every performance;

The REFLECT series of Sunday panel-discussions, featuring a wide array of topics, including the history of vaudeville, Chicago’s segregated history, the role of blackface in American entertainment, and others. These panel discussions are free and open to the public, and take place directly following the 2 p.m. matinee at Lookingglass Theatre. REFLECT panels will take place June 19 and 26; July 10, 17, 24, and 31; and August 7, 2016.

Community partners for Thaddeus and Slocum include the Chicago History Museum, the DuSable Museum of African-American History, Facing History and Ourselves, the Rebuild Foundation, and WBEZ 91.5 Chicago.

Email ThisBlogThis!Share to TwitterShare to FacebookShare to Pinterest
Labels: adult night out, Lookingglass Theatre, opening, Shows on our radar, Thaddeus and Slocum: A Vaudeville Adventure