ADULT NIGHT OUT: DISENCHANTED! AT THE BROADWAY PLAYHOUSE AT WATER TOWER PLACE 5/15

DISENCHANTED! OPENS THIS SUNDAY NIGHT
AT THE BROADWAY PLAYHOUSE
AT WATER TOWER PLACE, CHICAGO (May 15, 2016)
**The not-for-children musical revue DISENCHANTED! gives a saucy makeover to Snow White, Sleeping Beauty and other fairy-tale princesses.” ** 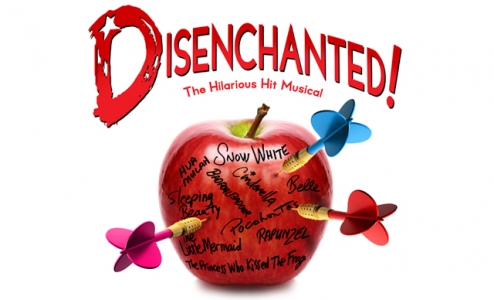 ChiIL Mama will be there... will you?! We'll be ChiILin' out in Chi, IL with the delightfully disenchanted anti-princesses, so check back soon for our full review. I love a good, snarky, pop culture parody, so I'm really looking forward to this.

Broadway In Chicago and Starvox Entertainment are pleased to announce that DISENCHANTED!, the hilarious hit musical, opens Sunday, May 15, at the Broadway Playhouse at Water Tower Place (175 E. Chestnut). Directed by Christopher Bond, DISENCHANTED! will play through June 5, 2016.

Poisoned apples. Glass slippers. Who needs 'em?! Not Snow White and her posse of disenchanted princesses in the hilarious hit musical that’s anything but Grimm. Forget the princesses you think you know – the original storybook heroines have come back to life to set the record straight. After multiple sold-out runs nationwide, these royal renegades tossed off their tiaras to bring their hilariously subversive, not-for-the-kiddies musical to you – and what you thought about princesses will never be the same!

The idea for DISENCHANTED! was conceived by Giacino, a former history teacher. When teaching his class about the colonial settlement at Jamestown, Virginia, he couldn’t help but wonder: What would the ‘real’ Pocahontas – a circa 1616, rough-and-tumble 10-year-old Powhatan girl – think of the fringed deer-pelt miniskirt and long, flowing hair donned by her 20-year-old counterpart in her 1995 movie comeback? A musician at heart, Giacino penned a musical number skewering the ‘princess pop culture’ that transformed Pocahontas from a revered Native American heroine into a pin-up vixen of the silver screen. Soon, Giacino found himself discovering a number of other princesses who had a bone to pick with the way they have been portrayed, and DISENCHANTED! was born!

The ‘storybook’ journey for DISENCHANTED! began with a sold-out, award-winning run at Orlando’s International Fringe Festival in 2011 (‘Best of Fest’ – Orlando Sentinel), and subsequent licensing of over a dozen productions nationwide, from New Jersey to California, all of which have been met with widespread critical acclaim. In addition to the sold-out New York engagement, this fairy tale is going international. A production in Santo Domingo, Dominican Republic has made its mark, as The National stated, ‘The Country will never be the same!’ The Dominican Republic production is now looking to continue its run throughout Latin America, while China’s leading commercial theatrical producer, Musical Theater China is planning a production in Beijing in the winter of 2015/16.

During the New York engagement, the production defied the trend for Off-Broadway shows with its sold out performances and critical acclaim. NBC New York called the show “funny, irreverent, and great fun! The seriously talented cast of six strong, hysterical women give fairytales a new meaning!” while Time Out New York stated, “If you love fairy tales with a sassy modern twist, relief is here!

The not-for-children musical revue DISENCHANTED! gives a saucy makeover to Snow White, Sleeping Beauty and other fairy-tale princesses.” The Huffington Post calls it, “funny and a touch wicked. DISENCHANTED!’s pop score delivers to great comic effect.” The New York Times describes DISENCHANTED! as “a girls’-night-out rebellion” and FOX 5 says "It's a hot ticket that delivers a new kind of fairy tale. You will laugh and then laugh some more at the sassy, irreverent humor." Broadway Box raves, “Think ‘Bridesmaids’ for Disney Princesses! This sidesplitting adult parody of the Disney princess posse and its mega-talented cast will make you blush and feel nostalgia all at once. Who could ask for anything more?”


Broadway In Chicago was created in July 2000 and over the past 16 years has grown to be one of the largest commercial touring homes in the country. A Nederlander Presentation, Broadway In Chicago lights up the Chicago Theater District entertaining well up to 1.7 million people annually in five theatres. Broadway In Chicago presents a full range of entertainment, including musicals and plays, on the stages of five of the finest theatres in Chicago’s Loop including its newly named The PrivateBank Theatre, the Oriental Theatre, Cadillac Palace Theatre, the Auditorium Theatre of Roosevelt University and just off the Magnificent Mile, the Broadway Playhouse at Water Tower Place.

Posted by Bonnie Kenaz-Mara at 2:14 PM