TONIGHT ONLY: Chicago, NY and LA can order Little Nero's Pizza & Get A FREE HD Download Code For Home Alone 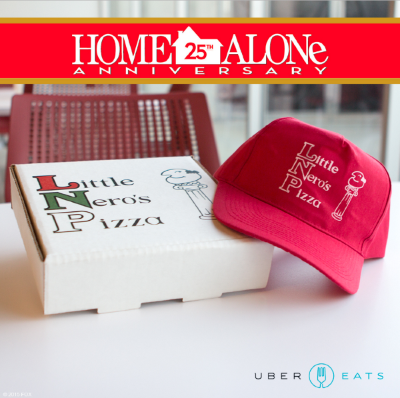 Keep the change, ya filthy animal! Twentieth Century Fox Home Entertainment and UberEATS are partnering for a one-day-only promotion to bring Kevin McCallister’s favorite cheese pizza to New York, Los Angeles, Chicago and San Francisco in honor of the 25th anniversary of one of the biggest live-action comedies of all-time, HOME ALONE.

On Friday, November 6, fans can order their very own personal cheese pizza from “Little Nero’s Pizza,” the iconic restaurant chain featured in the film, through the UberEATS option in the Uber app. Uber partners will then deliver fans their personal pie courtesy of local restaurants such as Numero 28 Pizzeria in New York, The Doughroom in Los Angeles, Big G’s Pizza in Chicago or Patxi’s Pizza in San Francisco. Every hot pie comes delivered in an authentic “Little Nero’s” box along with a Digital HD code for HOME ALONE so fans can sit back, dig in and savor all the best moments that the holiday classic has to offer.

Featuring a superstar cast lead by Macaulay Culkin in the role that made him an international household name, relive every pratfall and prank with Catherine O’Hara, John Heard, John Candy, Joe Pesci, and Daniel Stern in the holiday classic HOME ALONE.  The franchise begins as eight-year-old Kevin McCallister (Culkin) has become the man of the house, overnight! Accidentally left behind when his family rushes off on a Christmas vacation, Kevin gets busy decorating the house for the holidays. But he's not decking the halls with tinsel and holly. Two bumbling burglars are trying to break in, and Kevin's rigging a bewildering battery of booby traps to welcome them!

Fans can continue the fun throughout the holidays with the HOME ALONE: 25TH ANNIVERSARY EDITION now on Blu-ray, DVD and Digital HD, plus the HOME ALONE: ULTIMATE COLLECTOR’S EDITION which features all five films in the HOME ALONE franchise and some fantastic memorabilia for the serious Wet Bandits fans out there.

New to UberEATS? Use the promo code HOME ALONE to receive $10 off your first order.


Uber is a technology platform that is evolving the way the world moves. By seamlessly connecting riders to drivers through our apps like UberEATS, we make cities more accessible, open up more possibilities for users and more business for drivers. From our founding in 2009 to our launches in over 300 cities today, Uber’s rapidly expanding global presence continues to bring people and their cities closer. Follow us on Twitter: @Uber and find us on Facebook: Uber.
Posted by Bonnie Kenaz-Mara at 8:38 PM