PARENTS' NIGHT OUT: World Premiere of Unspeakable, inspired by the life of comedic legend Richard Pryor 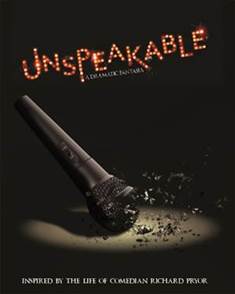 **Given the strong language and adult situations inherent in this story, this production is recommended for audiences 16 years of age and older.**

Here at ChiIL Mama/ChiIL Live Shows, we caught the opening night of The World Premiere of Unspeakable, a dramatic fantasia inspired by the life of comedic legend Richard Pryor.  James Murray Jackson, Jr. does absolutely shine as Richard Pryor in this short run, and it's worth a night out, if you're not easily offended. Those who came of age in the 70's and 80's will especially relate to this blast from the past. Yet this show is more of a tragedy than a comedy. It's an age old tale of childhood horrors turning into adult triumphs and of beloved entertainers on stage whose personal lives were a wreck. In future incarnations the script and staging could be stronger, as this still feels like a work in progress. Still, it makes for a fun parents' night out and we recommend it.

Unspeakable will play its final performance on November 8, 2015 at the Broadway Playhouse at Water Tower Place (175 E. Chestnut St.).

“It has been an absolute joy to mount the first full physical production of Unspeakable with an all Chicago cast and crew,” Director and Co-Author Rod Gailes OBC said.

Sex, Drugs and Comedy.  Unspeakable is an unflinching ride through the emotional landscape of Richard Pryor spanning sixty-one years and focused on the period between 1967 and 1982.  Born and raised in a Peoria brothel owned and operated by his grandmother, Pryor faced situations that forever shaped and scarred his sensitive soul.  With a pimp for a father and his mother a whore, young Pryor’s imagination helps him escape and ultimately leads him to comedy. Unspeakable captures the energy of a man battling success and the demons it invites.

Director and Co-Author Rod Gailes OBC brings a cinematic vision to the provocative odyssey of Pryor with an ensemble approach highlighting the comedian's journey from damaged child to comic legend, based on a script by OBC and Jackson, Jr.

This play is in no way supported, endorsed or created by, nor does it in any manner emanate from, Richard Pryor, his estate or other successor(s).