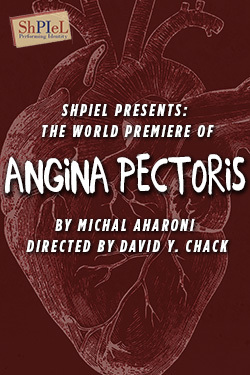 Angina Pectoris tells the fictitious story of a fictitious Israeli minister Dan Yasour, who, in order to placate the religious right, gets a seemingly innocuous bill passed so that Israeli Jews may only receive organ transplants from Jewish donors. Absurdity sets in when the politician himself needs a heart transplant and the only heart available is from a Palestinian Arab-Israeli.

Angina Pectoris is a biting political satire from one of Israel’s hottest playwrights that posits the ridiculous. But the humorous situations uncover deeper issues about identity in Israel and today’s world pertaining to culture, religion, and politics in a broader and multicultural context.

“I love the way Aharoni shows life in Israel through humor, satire, and meaningful issues. Her writing is a thought-provoking introduction to the thorny issues of the conflict. Her extensive knowledge of Israeli political realm, combined with her writing skills and her fantastic sense of humor make us not just laugh - but also think.” - Ari Shavit, best-selling author of My Promised Land.

“A brilliant and sophisticated satire, comparable to the mythical 'Yes, Minister' that unveils the intricacies of Israel's politics.” - Ami Pedahzur, The Institute for Israeli Studies of the Schusterman Center for Jewish Studies, University of Texas, Austin.

“I’ve known Michal Aharoni for many years and Angina Pectoris reveals not only intelligence, but it is humorous, unique, and creative.” Dr. Erel Margalit, Israel Minister of Knesset, Labor Party.

ABOUT MICHAL AHARONI, playwright
Aharoni is a playwright, newspaper columnist, and public-relations professional. Aharoni earned her theater degree from Hakibuzim Seminar in Tel Aviv, followed by a Master’s degree from Middlesex University in London. Over the past several years, she has worked as a spokeswoman for many Israeli politicians. Currently she writes for MAARIV online based in Washington, D.C. Her plays have been produced both in Israel and London. Angina Pectoris is her third full-length play. She is very excited to have ShPIeL produce her world premiere that is also being produced in a concurrent transcontinental world premiere in Israel at Tzavta Theatre in Tel Aviv, one of the leading cultural centers in Israel.

ABOUT DAVID CHACK, director
Chack, ShPIeL's producing artistic director, is a theatre producer, director, writer, curator and professor at The Theatre School at DePaul University. He is also president of the Association for Jewish Theatre and performance consultant to the Illinois Holocaust Museum and Education Center. Recent ShPIeL productions are Cities of Light and A Salon of Jewish-American Song; The Passions of Emma Goldman, The Invasion of Skokie and Conviction. He has also worked with Theater Wit, Victory Gardens Theatre, Silk Road Rising, Piven Theatre Workshop and Lookingglass Theatre.

ABOUT ShPIeL – PERFORMING IDENTITY
ShPIeL – Performing Identity comes out of extensive research and work on identity and theater by Artistic Producing Director, David Y. Chack, showing how identity, heritage and culture create meaningful art and community engagement that transcends boundaries. Coming from Jewish roots, ShPIeL, over its four years of existence has produced the Chicago Stage 773 and Skokie productions of Cities of Light, The Passions of Emma Goldman, and The Invasion of Skokie at the Skokie JCC Theatre; as well as the Israeli play Conviction with Ami Dayan and Maya Productions at Theater Wit; Belgian theatre artist Noemi Schlosser in Date Me! and Sound of Silence with Salomeeshpilt Theatre at Theater Wit; and a ShPIeL Showcase at N’Namdi Gallery honoring Jewish work alongside Asian-American, African-American, feminist, and Chicago historical pieces. ShPIeL is a proud recipient of the Driehaus Foundation’s Theatre Grant from the MacArthur Foundation.