TONIGHT: Blue Man Group and CYSO Collaborate In a FREE Show At Millennium Park at 6:30pm 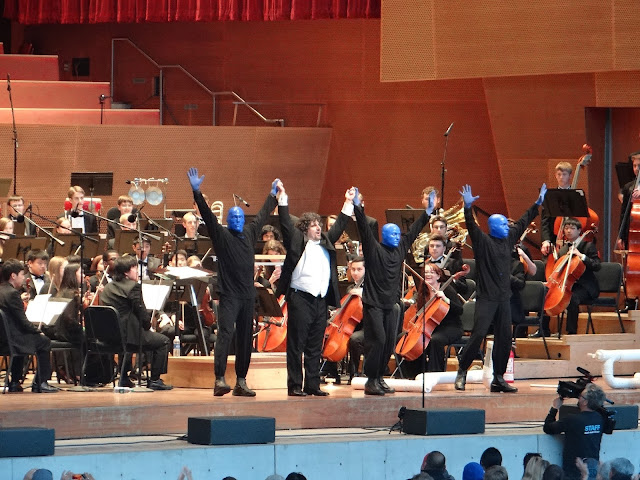 “Last year’s concert was great and this year’s will be bigger and better,” says CYSO Music Director Allen Tinkham. “The partnership between Blue Man Group and CYSO brings a highly entertaining and innovative spin to a classical music performance that our musicians relish and audiences won’t want to miss.”

The Blue Man Group and CYSO performance event is free and open to the public. For more information, please visit: cyso.org.

About Chicago Youth Symphony Orchestras
CYSO’s Symphony Orchestra has earned an international reputation as a premier orchestral ensemble featuring extraordinary young musicians from the Chicago area. Allen Tinkham was appointed Music Director of CYSO in 2001. During his tenure, CYSO has won eight of its 11 ASCAP National Awards for Adventurous Programming of Contemporary Music, as well as four Illinois Council of Orchestras awards (two Programming of the Year Awards and two Youth Orcehstra of the Year Awards). Under Tinkham’s direction, CYSO ensembles have performed at Orcehstra Hall, Millennium Park, Ravinia, Carnegie Hall and several international locales. CYSO has taken the stage three times at Lollapalooza, Chicago’s legendary rock music festival, the first time in August 2007 when it became the first ever classical music ensemble to do so. They will team up with The National’s Bryce Dessner for a May 17 concert at Orchestra Hall and Ben Folds at the Chicago Theatre June 6.

Chicago Youth Symphony Orchestra (CYSO) has provided musical education through orchestral programs and performance opportunities of the highest caliber since 1946.

Chris Jones of the Chicago Tribune gave the show a Four Star rating and said the material was “brilliantly revamped” and “truly joyous.” After seeing the new material, Hedy Weiss for the Chicago Sun-Times wrote, “The show's creators have cleverly updated the production with new wizardry while retaining its essential mind-set.” Chicago Parent editor Tamara L. O'Shaughnessy said “the coolest blue guys in Chicago just got cooler.”

For more information, visit blueman.com.
Posted by Bonnie Kenaz-Mara at 6:06 AM