GIVEAWAY: WIN 4 Tickets (up to $136 value) To Disney's The Little Mermaid at Chicago Shakespeare Theatre on Navy Pier!

Here at ChiIL Mama we have been long time fans of Chicago Shakespeare Theatre's excellent shows from their fabulous family friendly fare to their serious adult dramas and everything in between. 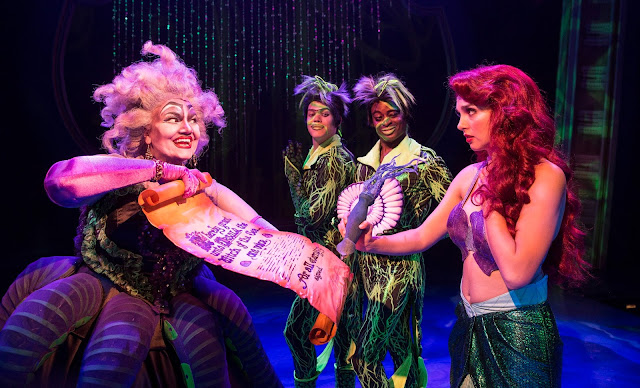 Ursula (Rebecca Finnegan) offers Ariel (Rachel Eskenazi-Gold) the chance to become human in exchange for her voice, as her minions Jetsam (Adam Fane) and Flotsam (Sean Blake) peer on. Photo by Liz Lauren.

We're thrilled to partner up with CST once again, to offer a free family 4 pack of tickets (up to $136 value) to Disney's The Little Mermaid at Chicago Shakespeare Theatre on Navy Pier. Winners choice of any remaining July show dates pending availability. Enter through midnight Tuesday 7/21.

ENTER HERE FOR YOUR CHANCE TO WIN! 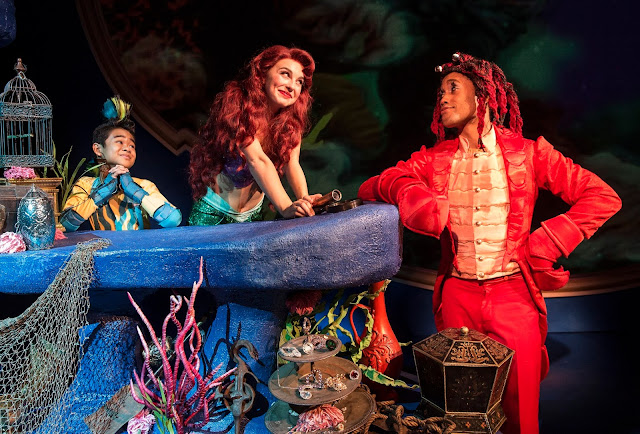 
We've had such a busy summer we couldn't make the opening but we'll be out to review this Saturday, so check back shortly for the full scoop. In the mean time, we're running a great GIVEWAY. 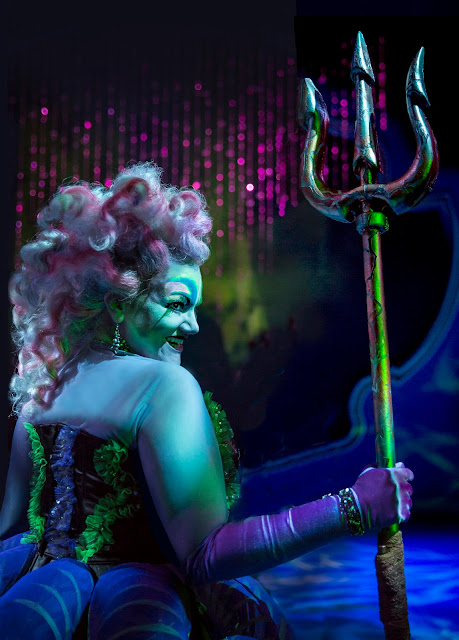 The sea witch Ursula (Rebecca Finnegan) in Chicago Shakespeare Theater’s production of Disney’s The Little Mermaid, directed and choreographed by Rachel Rockwell, in the Courtyard Theater now through August 16, 2015.
Photo by Liz Lauren.

This 75-minute production of Disney’s The Little Mermaid is best enjoyed by ages 5 and up and will be performed July 3–August 16 in CST’s Courtyard Theater. Tickets are $22-$34 with special discounts available for groups of 10 or more. All patrons receive a 40% parking discount at Navy Pier garages. For more information or to purchase tickets, contact Chicago Shakespeare Theater’s Box Office at 312.595.5600.

Children and adults alike will delight in the dazzling production and unforgettable music as the spunky mermaid Ariel goes on an adventure, finding true love—and her voice. Rockwell and CST Creative Producer Rick Boynton have collaborated to bring this new 75-minute production for family audiences to the Courtyard Theater, July 3–August 16, 2015. Every performance features opportunities for audiences to interact with the actors for one-on-one conversations and photos in the Lobby. 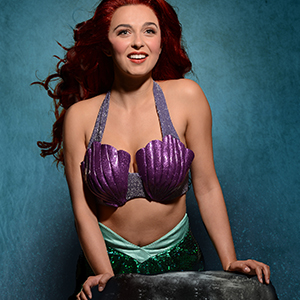 Based on the Hans Christian Andersen tale, the musical follows Ariel, a young mermaid that longs for a life beyond the sea. Over the course of her adventure, she defies her father King Triton, makes a deal with the sea witch Ursula and ultimately finds her home on land and happiness with the handsome Prince Eric. With music by Alan Menken, lyrics by Howard Ashman and Glenn Slater and book by Doug Wright, Disney’s The Little Mermaid features favorite songs including “Part of Your World,” “Kiss The Girl” and the Academy Award-winning “Under The Sea.”

Celebrated Chicago musical theater director Rachel Rockwell returns to Chicago Shakespeare to stage her fourth summer family musical. In addition to directing Shrek (2013) and Disney's Beauty and the Beast (2012), Rockwell has directed CST-commissioned world premiere musicals The Adventures of Pinocchio (2011) and The Emperor’s New Clothes (2010). Rockwell’s Chicago-area directing and choreography credits include Jeff Award-winning productions at The Marriott Theatre, The Goodman and Drury Lane Oakbrook, where Rockwell garnered a Jeff Award for Best Director for Ragtime. Rockwell returns to CST in the fall to direct and choreograph the offbeat new musical,  Ride The Cyclone.

In her Chicago Shakespeare debut, Rachel Eskenazi-Gold performs the role of Ariel, the independent and determined mermaid who yearns to be a part of the world beyond the sea. Three-time Jeff Award winner Rebecca Finnegan portrays Ursula, the sea witch who plots to steal Ariel’s voice. Matthew Jones plays Ariel’s father and ruler of the Sea—King Triton. Brandon Springman takes on the role of Prince Eric, Ariel’s handsome and brave love interest. Ariel’s loyal companions are Sebastian, played by Joseph Anthony Byrd and Flounder, played by Matthew Uzarraga whose previous CST credits include Young Shrek and Baby Bear in Shrek The Musical. Returning for his fifth CST production, Jeff Award-winner Mark David Kaplan takes the stage as Prince Eric’s servant and confidant Grimbsy, while Matthew Crowle plays Ariel’s loveably eccentric seagull friend, Scuttle. Ursula’s eel minions are portrayed by Adam Fane (Jetsam), who appeared in CST’s productions of Gypsy and Shrek The Musical, and Sean Blake (Flotsam), who has also been seen in Aladdin and Timon of Athens. King Triton’s other daughters, the Mersisters, are played by Missy Aguilar, Allyson Graves, Hanah Rose Nardone and Erica Stephan. The cast also includes ensemble members Este’Fan Kizer, Peter Scharbrough and Steven Spanopoulos.

Chicago Shakespeare Theater continues its successful collaboration with the Chicago Children’s Museum, presenting the following series of programs around Disney’s The Little Mermaid:

CCM staff and volunteers offer free hands-on art activities in the Theater’s lobby from 12:15 p.m. to 2:00 p.m. between the Thursday and Friday performances.
The cast of Disney's The Little Mermaid performs at the museum’s Free Family Night on Thursday, July 23rd at 5:30 p.m. as a part of the Made in Chicago season.

Access Shakespeare performances for Disney’s The Little Mermaid include:

ABOUT CHICAGO SHAKESPEARE THEATER
Chicago Shakespeare Theater (CST) is a leading international theater company and the recipient of the Regional Theatre Tony Award®. Under the leadership of Artistic Director Barbara Gaines and Executive Director Criss Henderson, CST is dedicated to creating extraordinary production of classics, new works and family programming; to unlocking Shakespeare’s work for educators and students; and to serving as Chicago’s cultural ambassador through its World’s Stage Series. Through a year-round season encompassing more than 650 performances, CST attracts 225,000 audience members annually. One in four of its audience members is under eighteen years old, and today its education programs have impacted the learning of over one million students. CST is proud to take an active role in empowering the next generation of literate, engaged cultural champions and creative minds.