ACT OUT: MICHAEL CERA, KIERAN CULKIN AND TAVI GEVINSON TO STAR IN THIS IS OUR YOUTH

MICHAEL CERA, KIERAN CULKIN AND TAVI GEVINSON TO STAR IN PRE-BROADWAY
THIS IS OUR YOUTH 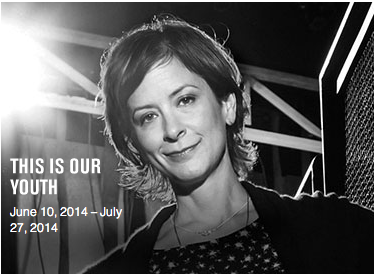 Steppenwolf Theatre Company is pleased to announce the addition of This Is Our Youth by Kenneth Lonergan to this summer’s line-up. Directed by ensemble member Anna D. Shapiro, the production features Michael Cera (Arrested Development, Juno), Kieran Culkin (Igby Goes Down, Scott Pilgrim Vs. The World) and Tavi Gevinson (Enough Said) in the Upstairs Theatre (1650 N Halsted St), June 10 – July 27, 2014. Tickets ($20 - $82) go on sale to the public on Friday April 25 at 11am, and can be purchased online at steppenwolf.org or through Audience Services (1650 N Halsted St) at 312-335-1650.

The Steppenwolf Theatre Company production of This Is Our Youth will be produced on Broadway by Scott Rudin, with performances beginning Monday August 18 at the Cort Theatre, and an opening night scheduled for Thursday, September 11th.

Set in New York in 1982, This Is Our Youth follows forty-eight hours in the lives of three very lost young souls: Warren, a dejected nineteen year old who has just stolen $15,000 from his abusive, tycoon father; Dennis, his charismatic drug-dealing friend who helps Warren put the stolen money to good use; and Jessica, the anxiously insightful young woman who Warren yearns for. Funny, painful and compassionate, This Is Our Youth is a living snapshot of the moment when many young people go out into the world on their own, armed only with the ideas and techniques they developed as teenagers—far more sophisticated than their parents realize, and far less effectual than they themselves can possibly imagine.

Artistic Director Martha Lavey vividly remembers the first time she saw This Is Our Youth in New York. “The play speaks so eloquently of its time,” Lavey notes, “that moment when the children of the ‘60s were parents themselves and had landed in Reagan’s America, and of a time in one's life—that confusing period of early adulthood before one has made a mark in the world. Kenny Lonergan has captured, with great wit and pathos both the timeless generational struggle and a moment in our country’s history that continues to affect our sense of who we are.”

Anna D. Shapiro is currently directing Of Mice and Men, (opening April 16, 2014) at Broadway’s Longacre Theatre. She was nominated for a 2011 Tony Award® for her production of Stephen Adly Guirgis’ award-winning play, The Motherf**ker with the Hat, and was awarded the 2008 Tony®, Drama Desk and Outer Critics Circle Awards for Best Direction of a Play for her production of Tracy Letts’ August: Osage County. Anna has been a Steppenwolf Ensemble member since 2005. Her Steppenwolf directing credits include A Parallelogram and Tracy Letts’ adaptation of The Three Sisters, among others. Other recent directing credits include Domesticated (Lincoln Center Theatre), A Parallelogram (Mark Taper Forum), A Number (American Conservatory Theatre) and The Drawer Boy (Paper Mill Playhouse). Shapiro is a graduate of the Yale School of Drama and Columbia College. She is a full-time professor in Northwestern University's Department of Theatre and has served as the Director of the Graduate MFA Directing Program since 2002.

Pre-sale tickets are currently available to 2014/15 season Subscribers. Call Audience Services at 312-335-1650 for more information. 20 for $20: twenty $20 tickets are available through Audience Services beginning at 11am on the day of each performance (1pm for Sunday performances). Rush Tickets: half-price rush tickets are available one hour before each, show pending availability. Student Discounts: a limited number of $15 student tickets are available online. Limit 2 tickets per student; must present a valid student ID for each ticket. For additional student discounts, visit steppenwolf.org/students Group Tickets: all groups of 10 or more receive a discounted rate for any performance throughout the season. For additional information, visit steppenwolf.org/groups.

Accessible performances include a touch tour and audio description on July 26 at 3pm; closed captioning on July 19 at 3pm; and American Sign Language interpretation on July 18 at 7:30pm. For more information, visit steppenwolf.org/access.

Steppenwolf Theatre Company is America’s longest standing, most distinguished ensemble theater, producing nearly 700 performances and events annually in its three Chicago theater spaces—the 515-seat Downstairs Theatre, the 299-seat Upstairs Theatre and the 80-seat Garage Theatre. Formed in 1976 by a collective of actors, Steppenwolf has grown into an ensemble of 43 actors, writers and directors. Artistic programming at Steppenwolf includes a five-play Subscription Season, a two-play Steppenwolf for Young Adults season and two repertory series: First Look Repertory of New Work, and Garage Rep. While firmly grounded in the Chicago community, nearly 40 original Steppenwolf productions have enjoyed success both nationally and internationally, including Off-Broadway, Broadway, London, Sydney and Dublin. Steppenwolf has the distinction of being the only theater to receive the National Medal of Arts, in addition to numerous other prestigious honors including an Illinois Arts Legend Award and 12 Tony Awards. Martha Lavey is the Artistic Director and David Hawkanson is the Executive Director. Nora Daley is Chair of Steppenwolf’s Board of Trustees. For additional information, visit steppenwolf.org, facebook.com/steppenwolftheatre and twitter.com/steppenwolfthtr.

Currently on stage are The Way West by Mona Mansour, directed by ensemble member Amy Morton (through June 8, 2014) in the Downstairs Theatre; Russian Transport by Erika Sheffer, directed by ensemble member Yasen Peyankov (through May 11, 2014) in the Upstairs Theatre; and Garage Rep 2014, featuring The New Colony’s reWILDing Genius, Prologue Theatre Company’s Saturday Night/Sunday Morning and Walkabout Theater Company’s The Wild (through April 20, 2014) in the Garage Theatre.