#NaBloPoMo VS. #NaNoWriMo 1/3 Of The Way 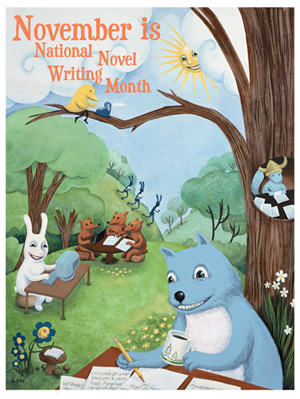 "Mom, is there really such a thing as noblahpomo... nanoblogmo... nablomomoh?"  my son had the audacity to ask.   "I think you made it up so you can keep on writing on your blog every day instead of doing NaNoWriMo and writing another novel with us!" 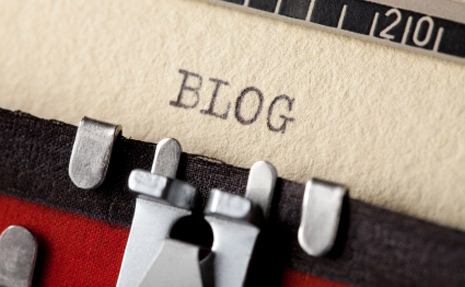 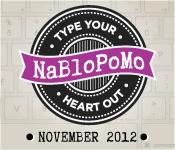 I reassured him, NaBloPoMo is indeed a thing.  And I'm doin' it.   I showed him the logo and everything. 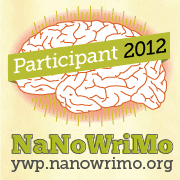 That said, I'm quite proud my kids are now in their 5th year of NaNoWriMo Young Writers.   They've been rockin' out on their new novel collaboration and are aiming for an impressive goal of writing 13,333 words this month!

They've got numerous cool logos for Young Writers Program, tee shirts, buttons, stickers and a rockin' support site.   They even get cool on line pep talks from sweet authors.   My son's just been reading The Candymakers, so he was extra jazzed to see a pep talk by author Wendy Mass.

Despite a busy busy month, and a vicious bout of the flu that had my daughter throwing up TEN times last night and today....we're all making daily writing a reality.

I answered all the questions through Monday 11/5 here, too.

Here's the next round of questions and my answers:

Tuesday, November 6, 2012
If you were President of the United States, what would be your first act in office?
I'd make it mandatory for everyone who wants to serve in a political office to have to take one month of "enlightenment training" before they could start.   This would involve community service, living on the wages (or lack thereof) of the poorest of their constituents, and spending time sharing meals with families of all races, income levels, sexual orientations and demographics they would be representing.

Wednesday, November 7, 2012
Talk about the last compliment you received.
"You're the best mom ever." my daughter said this afternoon while she lay in my lap after throwing up all night and most of the day.  I would have given anything to spare her the pain, but it was so sweet and gratifying to be able to just slow down and hold her for so many hours....without a schedule or agenda.    We built a fire in the wood stove, watched movies and cuddled.
Sure, missing a night's sleep, dumping bowls of puke and washing load after load of sheets from where she overshot the "pukey bowl" is one of the less glamourous, least fun sides of motherhood....but I'll treasure and remember those sweet words in a few short years, when she's a snarky teenager.

Thursday, November 8, 2012
If you could have any job (and instantly have the training and qualifications to do it), which job would you want?
I'd love to be a well paid photographer/ videographer.   As much as I love writing, I reeeeally dig shooting shows and interviewing people.   The visual aspects appeal to me and sometimes, cliche as it is....a picture IS worth a thousand words.

Friday, November 9, 2012
If you could change one thing about your life right now, what would it be?
I'd like to master the art of cloning so I could be with my kids and husband, cover all the simultaneous events in Chicago I'd love to be at, blog/write/edit more hours in the day and still get plenty of sleep/yoga/massage & hot tub time!!

Want to plan ahead or play along?   Here are the rest of November's prompts: