ChiIL Mama caught up with Jeff Kinney--author and illustrator of the Diary of a Wimpy Kid series & father of two sons, 7 & 10.    Jeff swung through Chicago on 11/16/12 on his impressive 50 book stores in a week tour!

Check out our original HD video interview above.   We began the interview on the big bus--decked out in Diary of a Wimpy Kid--The Third Wheel characters--different on each side.   Jeff was busy getting a leg up on his book signing duties.   Then we caught up with a group of elementary kids from St. Matthias and a lucky group of ticketed families, for an intimate book signing at The Book Cellar in Lincoln Square, Chicago.

I was so impressed with the author and his team after a couple kids got in line to meet him without any books or money to buy one.   They were going to have him sign a scrap of paper, but he surprised them with copies of his new books instead!   Good people indeed.

We are stoked to see that someone so creative, amusing and positive is getting the recognition he deserves.  It was cool to read that Jeff Kinney was named one of Time magazine's 100 "Most Influential People" in the world in 2009.

Although, I personally got more excited by this clip from his website:

Diary of a Wimpy Kid author Jeff Kinney didn’t grow up wanting to be a children’s author. His dream was to become a newspaper cartoonist, but he wasn’t able to get his comic strips syndicated.
In 1998 Jeff came up with the idea for Diary of a Wimpy Kid, a story about a middle-school weakling named Greg Heffley. Jeff worked on his book for almost eight years before showing it to a publisher in New York.

Success is all the more sweet when it follows failure!   I used to keep a newspaper clipping above my own writing desk about how one of my idols and all time favs, Dr. Seuss, got twenty seven rejection letters for his first book and didn't give up.  It went something like this from the rockin' site One Hundred Famous Rejections.  After that, Dr. Seuss went on to win two Academy Awards, two Emmy Awards, the Pulitzer Prize, and a Peabody Award.  He sold over two million books.

It was truly a treat to meet Jeff Kinney, the beloved, best selling author of the Diary of a Wimpy Kid series and Poptropica Website.  Thanks for the signed book, Jeff!   My son devoured it in 1 sitting as soon as he got home from school, laughing out loud as he read.   We're working on getting a give away copy or two for our readers as well, so check back with ChiIL Mama like we vote in Chi, IL...early and often and we'll let you know what's up.

The Diary of a Wimpy Kid book series, movies and merch make ChiIL Mama's Great Gifts List for 2012.   They celebrate the creative, nerdy, artistic kids.   And the gift of instilling a love of reading in children is one of the best gifts EVER.   We're also huge fans of the funny...so gifts that make you laugh top our list every year. 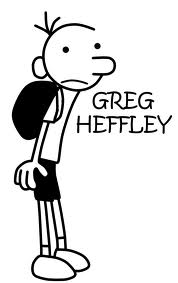 Check out our past coverage about The Wimpy Kid--Third Wheel mega tour by clicking right here. 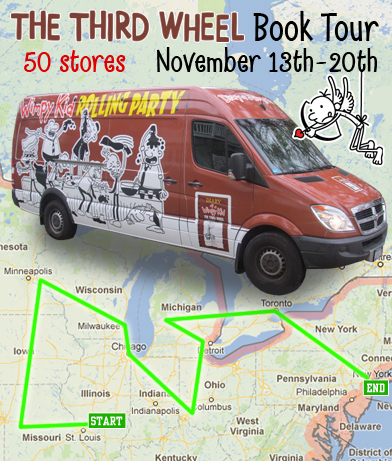 Check out our original still photos below.

More than 75 million Diary of a Wimpy Kid books are in print in 41 languages in more than 44 countries around the world. Published by Amulet Books, an imprint of ABRAMS, Kinney's work has been widely praised for its ability to turn reluctant readers on to books.

Jeff Kinney was named one of Time magazine's most influential people in the world. There are three major motions pictures based on the books, which grossed more than $200 million worldwide in box office sales. The book series won Favorite Book at the Nickelodeon Kids' Choice Awards in 2010, 2011, and 2012, and Jeff Kinney won a Children's Choice Book Award in 2012. Books in the series have won numerous awards voted on by students and teachers in schools around the globe. Kids can also share in an interactive experience with Greg Heffley on Poptropica.com, a site visited by millions of kids each month.