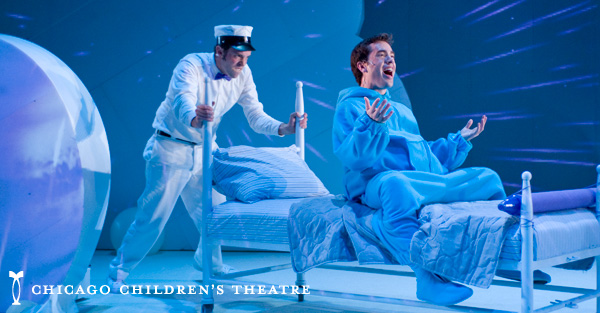 It's a dual Harry Day here at ChiIL Mama.   We're finally going to get to see Harold and the Purple Crayon (Chicago Children's Theatre) at their closing show at 2pm today, and we're catching Broadway in Chicago's acclaimed Potted Potter at 5pm, too!  We've been promoting Harold and the Purple Crayon since our early sneak peek at the rough sketches and molds at Webster Wine Bar back at the end of summer.  We've given away tickets and read all the great reviews, but we were out of town on a travel shoot and crazy busy since they opened, and we haven't been able to actually see it.

I generally catch show openings, as a reviewing member of the press/ professional blogger.   Show openings have a great energy, hopeful and new and bursting with potential.  But closings have power, too.   Actors know it's their last chance (at least until a hypothetical future remount) to be that character and inhabit that world.   And that's a magical thing.

At 9 & 11, my kids are too mature for some local early childhood productions, but they're at a great age to geek out with me on the set design, production values, acting and directing.   So, even though Harold was conceived for the 3-6 year old target market, Chicago Children's Theatre productions are such high caliber, world class offerings, my kids still begged to go with me.

I mean, look at the creative team behind this production:

Back in my theatre days, I used to tell people I was an actor.   They'd invariably correct me and say "Don't you mean actress."   Then I'd launch into a semantics rant about actor being defined as "one who acts" and actress as the diminutive form of actor--literally "little actor" which annoyed the heck out of me.

Speaking of...save the dates.   The rest of their season is packed with must see offerings starting with Bud Not Buddy, January 12th and The Elephant and The Whale in association with REDMOON THEATRE.   Squee!!   We CAN'T WAIT to see what this creative collaborations brings.

Click here for our past Harold and the Purple Crayon coverage

Then check back with ChiIL Mama like we vote in Chi, IL...early and often for more sneak peeks into Chicago Children's Theatre's exciting plans for 2013.

PLAYING TO SOLD OUT HOUSES all over the world, the Olivier Award nominated POTTED POTTER – The Unauthorized Harry Experience – A Parody by Dan and Jeff takes on the ultimate challenge of condensing all seven Harry Potter books (and a real life game of Quidditch) into seventy hilarious minutes. Even if you don’t know the difference between a horcrux and a Hufflepuff,POTTED POTTER will make you roar with laughter.
Written and performed by two-time Olivier Award-nominated actors Daniel Clarkson and Jefferson Turner, Potted Potter is perfect for ages six to Dumbledore (who is very old indeed).

Click here for ChiIL Mama's Potted Potter preview and all the Broadway in Chicago shows this fall & early winter.


Check out the Official Potted Potter site here, to book your tickets and more. 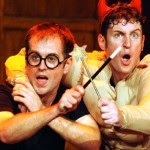