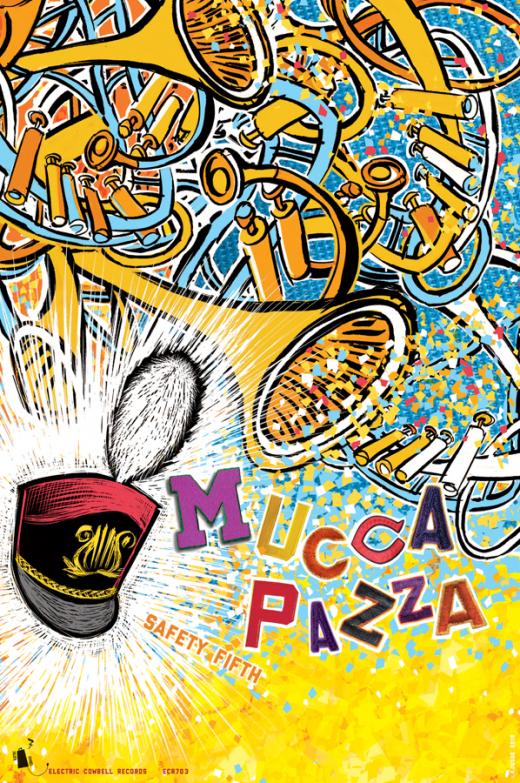 Twisted metal and piles of slag behind them, shish boom bah!

They march in formation, rip through drum cadences, bust out cinematic stories, and incite mass dance outbreaks. They channel everything from Bartok to a love-struck Godzilla, re-imagine the uptight 19th-century march, and make up soundtracks for classic Egyptian movies that never happened. Not bad for an eccentric gang of loud-and-proud, self-proclaimed band geeks.

“We look like a marching band and occasionally behave like a marching band, but we don’t sound like one,” explains Gary Kalar, mandolin player and member of Mucca Pazza’s “freak” section of stringed instruments and accordion. “We care about the music we play; it’s not a novelty thing. We just don’t fit into any hyphenated genre.”

This May and June, Mucca Pazza will rock New York, Washington DC, Milwaukee, St. Louis, Louisville, and, of course, Chicago, with a live show too big to stay on stage.

Why play a gritty factory parking lot for free every Sunday morning?

“We figured no one would bother us in an industrial area,” reflects Messing. “It was also weirdly inspiring to be there, by ourselves on the Chicago River, among all these big scrap yards. We felt like we were putting together something from scrap.

“We came together in a whole bunch of ways. The connections were pretty random,” explains trombonist Elanor Leskiw. “Some of us met while protesting the war here in Chicago. Many of us are involved in theater and music for theater. About seven of us wanted to explore playing original compositions and just have an outlet. As a composer, you don’t have an ensemble to try out new music, unless you’re at an academic institution or orchestra. It grew from there. We were having so much fun playing at the parking lot at noon. People would show up to listen every week, with donuts and coffee.”

“All the rock bands and the singer-songwriters have a place to be, but we grew up in school bands,” Messing adds. “We had to come up with our own alternative that was fun.”

The alternative evolved during those impromptu Sunday sessions, melding a devil-may-care rock vibe with the devil’s-in-the-details focus and precision of the best marching bands. Cheerleaders praising the wonders of integers and verbs—or staging bold rallying cries against the Dewey decimal system—became part of the team, as did a motley crew of unexpected instruments.

For example, when guitarist Jeff Thomas approached the band, psyched about the music but dismayed that he only played guitar, the helmet amp was born: a hockey helmet DIY-melded with a tiny loudspeaker. “The hockey helmet has this strange resonance, which was odd at first,” laughs Thomas, “but it frees you.” The same setup allows mandolin, accordion, and violin to march alongside the brass, glockenspiel, and drum corps, and sparked the Mucca Pazza section lovingly dubbed “the freaks.”

Freakdom adds a fresh layer to the marching band sound, as funky guitar lines talk back (“March Anormale,” a slightly twisted take on 19th-century military band music) or the accordion sets the pace (the whimsical beauty of “Tube Sock Tango”).

Like the band, the music also came together from disparate, awesome bits: Quirky winks at TV shows’ theme songs (“Maui Waui 5-0” is a 70s-style car chase of a romp, for example) meet garage band songs gone drum and brass (the bad-ass “Boss Taurus”). A fascination with the work of Ennio Morricone (audible in “Hang ‘Em Where I Can See ‘Em”) crosses paths with a red-hot tango of love between the Mummy and Godzilla (the Tom Waitsian “Monster Tango”).

The fluid movement between genres, styles, and influences matches the band’s mobility. Even when performing in canoes on the Chicago River—the wild idea of an environmental non-profit that put the band in boats—the group uses formations familiar from their band geek days and high-energy drum cadences (like “Coolashell”) to transition from place to place, from piece to piece. They can also set a whole audience marching—sometimes right off the street and into the club.

This dynamism is tangible in the music and makes for an audience experience that’s up close and personal. “I never moved around much when I played in rock bands. I was chained to an amp,” notes Thomas with a smile. “The helmet was liberating. I could explore my body more, and it actually affected the way I played. Because of the directional quality of the helmet, I have to get really close to people. When I perform in the audience, I love getting obnoxiously close.”

Personal space issues aside, Mucca Pazza pushes the envelope, bringing punk aesthetics to the parade and marching band chops to the rock club. “We were marching in the Kentucky Derby parade in Louisville, with all these 100-member marching bands,” Thomas recounts. “We’d march like a regular band and then with a whistle blow make these random honking noises. At the point when a TV newscaster started to announce us on the air, we started honking away, and the announcer stopped mid-band name. He said, ‘I don’t think we’ve seen anything quite like this before.’”

If you're not already intrigued and entranced with that tag line....    What can we say to convince you.    We'll be catching opening night tonight and we'll have a full review up for you in the very near future.    We've been fans of Babes With Blades for years and highly recommend their high energy, fight laden shows.   They're kicking off their 15th anniversary season in style

Several shows are already SOLD OUT, so don’t delay – get your tix today! 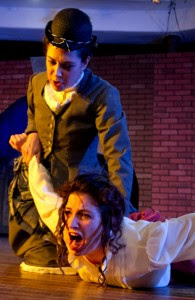 Dan Foss (Director) has been involved in the development of "Susan Swayne and the Bewildered Bride" since spring of 2009 and is thrilled to finally be bringing it to life with Babes With Blades.  Recent directing experience includes "Erratica" with American Demigods (also by Reina Hardy), "Vanishing Points" with Point of Contention, and various projects with Appetite Theatre Company, The Side Project, Hobo Junction, Rogue Theater Company, and Rascal Children's Theater.  You may recognize Dan from his brief return to the stage as Uncle Saul in BWBTC’s production of "The Double" last fall.  He is also the Secretary of BWBTC’s Board of Directors.

Libby Beyreis (Violence Designer) has been fighting on stage since 1994, and is proud to be a company member of Babes With Blades.  She has designed violence for companies including Idle Muse, Strangeloop, The DIVISION, Focal Point Theater Company, Chase Park, Free Street, as well as a number shows with the Babes, most recently Romeo & Juliet and The Double.
Kjerstine McHugh (Assistant Director) is tickled to be working on this wonderful script with such an amazing group of artists. She hopes that she gets more stuff right than she gets wrong on this, her second foray into the wonderful world of not stage managing.

Babes With Blades Theatre Company will complete its 15th anniversary season in spring of 2013 with an all-female “Julius Caesar.” 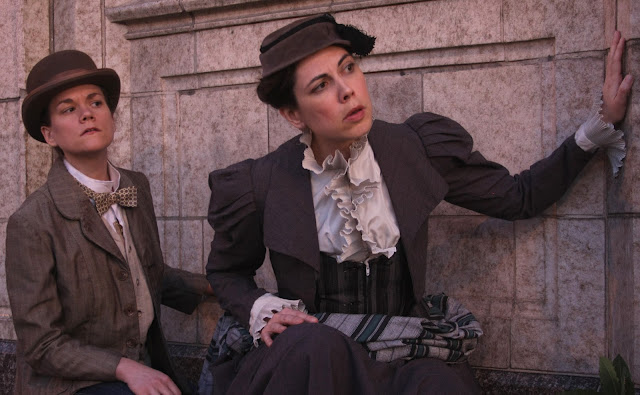