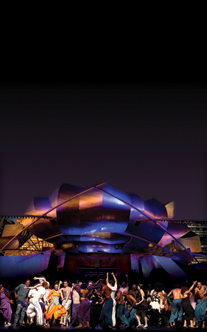 “The Chicago Dancing Festival continues to grow as one of the country’s most amazing dance showcases, bringing the best dancers and choreography from around the world to our stages,” said Chicago Mayor Rahm Emanuel. “The Festival enriches life throughout the city and in our neighborhoods, and shines a global spotlight on the wonderful culture that Chicago has to offer.”

Highlights of the 2012 Chicago Dancing Festival (CDF) include the premiere of Bolero Chicago, choreographed by New York-based innovator Larry Keigwin and starring 80 non-dancer members of the Chicago public.  Created over a two-week residency and set to Maurice Ravel’s iconic “Bolero,” Bolero Chicago uses movement generated by the cast members themselves to exemplify Chicago’s unique culture and style.  Another highlight is the Festival debut of After School Matters’ Hip Hop Culture Dance Ensemble performingTouch of Soul, a new work by contemporary choreographer Nicholas Leichter, commissioned by the Festival to honor the memory and legacy of beloved arts champion and former Chicago First Lady, Maggie Daley.  Additionally, local troupe Giordano Dance Chicago makes its Festival debut with Two Become Three, a humorous duet about the arc of romance by contemporary Swedish choreographer Alexander Ekman, also a Festival commission.

Three different performance showcases featuring top ballet and modern dance professionals from Chicago and across the country, a look at Chicago’s ever-evolving dance community in an informative lecture-demonstration, a day-long screening of dance films that feature collaborations between dance artists, filmmakers and musicians, and an interactive social dancing lesson all complete the week’s offerings.  The Festival culminates with it signature Grand Finale on the stunning outdoor stage of the Jay Pritzker Pavilion in Millennium Park.

·      12:15 pm and 4 pm – Feature-length documentary First Position (2011), directed by Bess Kargman, follows six talented ballet hopefuls through preparation and competition in one of the most prestigious youth ballet competitions in the world, the Youth America Grand Prix.

·      2 pm and 6 pm – Academy Award®-nominated documentary PINA (2011), made by Wim Wenders in collaboration with the dancers of the Tanztheater Wuppertal, captures the emotional intensity and unique aesthetic of German post-modern dance pioneer Pina Bausch.

Thursday, August 23, 6 pm – “Dancing Under the Stars”
Grant Park, Spirit of Music Garden, 601 S. Michigan Avenue
·        Chicago Dancing Festival partners with SummerDance Chicago for an evening of participatory dancing as people of all ages and skill levels come together on a 4,900 square-foot, open-air dance floor for an introductory one-hour dance lesson, followed by music and dancing.  This evening begins with a Polka Dance lesson by Paul Collins followed by dancing to the beats of Joe Walega and the Happy Hearts Orchestra with instruction from Ethnic Dance Chicago.

Ticket Information
All events are free but tickets for the indoor performance showcases (Harris Theater, Auditorium Theatre and MCA) are reserved in advance.  Tickets for these shows became available July 17 and “sold out” within hours, however wait-lines begin at each venue one hour prior to the performance and tickets unclaimed within 15 minutes of the curtain time will be released to those in the wait-line.  No tickets are needed for the “Dancing Movies” screenings at the MCA, the “Dancing Under the Stars” program at Grant Park, or the outdoor “Celebration of Dance” finale performance at the Pritzker Pavilion.  Anyone unable to attend one of the indoor performance showcases is encouraged to take part in one of these three non-ticketed events.

Prima Parti
Following the performance of “Chicago Dancing” at the Harris Theater will be the “Prima Parti” opening night after-party.  Tickets are $200 per person and can be purchased by emailing primaparti@chicagodancingfestival.com or by calling 773-609-CDF5 (2335).  “Prima Parti” attendees will enjoy VIP seating for the performance followed by cocktails, hors d’oeuvres and the chance to mingle with the professional artists in the Harris Theater Rooftop Tent.

About the Chicago Dancing Festival
The Chicago Dancing Festival was founded in 2006 to elevate awareness of dance in Chicago, to increase accessibility to the art form and to provide inspiration for local artists.  Its mission is to present a wide variety of excellent dance, enrich the lives of the people of Chicago, and provide increased accessibility to the art form, thereby helping create a new audience.  Its vision is to raise the national and international profile of dance in the city, furthering Chicago as a national and international dance destination.

Past seasons have attracted new and returning audiences of thousands with the highest quality offerings in ballet and modern dance from companies from all across the nation and outside of the United States.  Since its inaugural event, more than 40 different companies have performed for 50,000+ audience members — growing from an audience of 8,500 in 2006 to more than 18,000 in 2011 — all with free admission.

Lar Lubovitch (Founder, Artistic Director) is one of America's most versatile and highly acclaimed choreographers and founded the Lar Lubovitch Dance Company 44 years ago.  In the years since, he has choreographed more than 100 dances for his New York-based company, which has performed in nearly all 50 American states as well as in more than 30 foreign countries.  Born in Chicago, Lubovitch was educated at the University of Iowa and the Juilliard School in New York.

Jay Franke (Founder, Artistic Director) first danced with the Lar Lubovitch Dance Company in 2005.  Franke began his formal training at Booker T. Washington High School for the Performing and Visual Arts in Dallas, Texas.  In 1993, he was selected as a Finalist for Presidential Scholar in the Arts and accepted into the Juilliard School.  Upon receiving his B.F.A. in Dance from the Juilliard School, Franke went to work with the Twyla Tharp Dance Company, “THARP!”.  Franke has since danced with The 58 Group, Lyric Opera Ballet Chicago, and most recently Hubbard Street Dance Chicago.