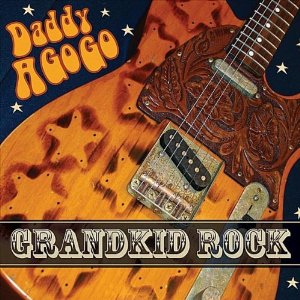 “Grandparents are cool, beloved, and cherished, which is why on each of my CDs there are a couple of songs with shout-outs to them. I thought why not put some of those tunes together and share a little grandparental love?
John Boydston

Congrats to Nicole F. who is our disc winner this week.   She and her family like to rock out to Mindy Hester & The Time Outs.   She's won the new release by Daddy A Go Go, Grandkid Rock.   Check out this "best of" CD that takes kindie rock into the next generation and beyond!   Older kids and parents will appreciate the rockin' riffs and pop puns.    Littles will have a great time playing air guitar and dancing in sweet celebration of their elders.


DADDY A GO GO SAYS:
WHO NEEDS KID ROCK WHEN YOU’VE GOT
‘GRANDKID ROCK’?
“Boydston brings a percussive beat and sly humor to songs like ‘I Caught My Daddy Watching Cartoons.’”– People Magazine
“The lyrics are pure kid, but parents will hear nods to the Eagles, the Dead and even proto-punks the Vaselines. End result: a perfect soundtrack for changing diapers, washing the minivan or just bopping around the kitchen." – Newsweek
“John Boydston celebrates kids and classic rock with slick '60s pop references, entertaining lyrics with a froth of good-for-you messages and feel-good, sing-along bounce.” – Los Angeles Times
"You gotta love the brains and instruments behind Daddy A Go Go -- John Boydston, a former CNN producer and current stay-at-home dad who came of age in rock's golden era and is now trying to re-create it for kids. He does it with his original songs, groaner pop culture puns, smart covers and ripping guitar lines ... Daddy A Go Go proves again that he's one of kids-music's rockin'-est rulers." – Minneapolis Star-Tribune

A leading advocate for rock and roll in kids’ music, former CNN producer John Boydston has been “rocking out and raving on” for families since 1998.  The acclaim has been tremendous.  Five Daddy A Go Go CDs have made Amazon.com’s “Best of the Year” critics’ list.
Come on, Get Happy (The Best of Daddy A Go Go, Volume I) was included this past November on the AOL Parent Dish “Top 25 Albums for Kids” list.
Monkey in the Middle and Mojo A Go Go were honored with the prestigious Parents’ Choice® Award.  The Washington Post credited Daddy A Go Go with helping change the face of kids’ music by moving “playroom tunes into the pop-rock era.”   Kids’ music authority Warren Truitt (About.com/Children’s Music) characterized Boydston’s albums as “full of puns, parental pop music winks, and headbanging riffs … John Boydston lets the jokes fly and the rock and roll thunder.”
Daily Candy Kids declared, “Not some watered-down musician for wee ones, Boydston isn’t afraid to shred some serious guitar riffs.”

A “greatest hits” album comprised of 16 remixed tunes that John Boydston considers his “rockingest rockers” from six previous Daddy A Go Go CDs, Grandkid Rock cheerfully continues the Daddy A Go Go alterna-rock tradition of what Stomp & Stammer described as “upbeat, wildly entertaining rave-ups, sing-alongs and silly puns that have endeared the group to kids (and their parents) nationwide.” While Boydston’s most recent release, Come On, Get Happy, focused on softer songs for younger children, Grandkid Rock goes the other direction, rocking out for the bigger kids with lots of electric guitars, drums, driving rhythms and power chords.

Why Grandkid Rock? John Boydston explains, “Grandparents are cool, beloved, and cherished, which is why on each of my CDs there are a couple of songs with shout-outs to them. I thought why not put some of those tunes together and share a little grandparental love? I even re-tracked the lyrics on ‘I Caught My Daddy Watching Cartoons,’ making the old guy even older yet.”

Born in Oklahoma, John Boydston graduated from the University of Oklahoma with a Masters in Journalism. He spent ten years working as a television news producer, making stops at CNN, WSVN, and WSB before leaving the news biz in the mid-’90s to become a stay-at-home dad, a move that set the scene for his rebirth as Daddy A Go Go.  All this happened when his sons were young, with the boys providing inspiration for many of the earliest Daddy A Go Go songs.  Boydston has never looked back.
Check out their web site HERE.

Posted by Bonnie Kenaz-Mara at 9:15 AM