Reporting In From Sunny Orlando-Eco, Palestinians, Pirates, Pools and Magic


ChiIL Mama's checkin' out Orlando and reporting back to you on fun, Eco-friendly things families can do in the area.   There are a zillion guides, blog posts and articles on the theme parks and vacation hot spots Orlando is renowned for.   We want to delve a little deeper and find out how the theme park "big boys" are reducing their carbon footprint and making the world a greener place.   Disney, Universal and Sea World are all on board to make Orlando greener than The Emerald City.


Tourism is Florida's #1 industry and with 40 million people visiting yearly, eco-friendly, green practices are getting more than just lip service.   Sustainability and self preservation is a matter of survival for Florida.    We'll also see what hotels are doing to keep the sunshine state a bit greener, and give you some great eco-tips on local springs, gator tours, zip-lines, ocean access and swamp seeing.


Check in early and often.   We'll have brief updates throughout the week at Chicago Parent, ChiIL Mama and ChiIL Travel Kids.   Then after the trip we'll be posting to a number of other sources as well.   We'll let you know when those are published.


Yesterday we set off on two airlines from two airports to convene in Orlando for 8 days of fun in the sun.    You'd think we were top level execs at Coca Cola who have to take separate planes so the secret formula won't be lost in case of a crash.    Our creative travel arrangements had more to do with expiring flyer miles than corporate secrets.


Our cabbie on the way to Midway Airport was a Palestinian with great stories.   He told us his own kids were also on spring break and had just left for vacation at The Red Sea and The Dead Sea.    My kids were excited to hear that, and Du-Jay spouted back that he had learned in school that The Dead Sea is the lowest point on earth and 7 times saltier than the oceans.


The cabbie was happy the kids were interested and went on to tell us that in his own childhood his brother had a problem with his eyes being very red and his family spent loads of money and took him to eye specialists in 4 countries.   Doctors from Egypt, Syria, Palestine and Israel all examined the boy and treated him with drops, but the problem kept returning.   Then the child accidentally opened his eyes under water during a Dead Sea vacation and after crying and rubbing his eyes from the burning salt, he was miraculously cured for life!


The kids and I went on to have an excellent experience flying Southwest Air.   The announcements are always hilarious, like the following snatches from their emergency mask demo.


The kids happily snapped photos out the plane window and chomped on their gum to equalize their ear pressure.


Finally we landed and Sagezilla finally comprehended why I wouldn't let her leave chilly Chi town in her fleece lined jeans!   We're lookin' at sunny, upper 80's all week and 93 tomorrow.


We spent our travel day and our first day here, relaxing by the pool at our sweet Marriott Resort (Harbour Lake).   There are two pirate themed pools with various sized water slides, 3 hot tubs, and an impressive round the clock itinerary of family fun.

Keepin' it green:
Marriott's big on encouraging guests to recycle and limiting housekeeping so families staying a week keep their sheets and towels just like home.   This provides a huge savings in human and natural resources.   Of course we'll be eating out a lot...it is vacation after all, but Marriott's full kitchens make it easy to stock up on the basics and eat in some, too.


Dug laid low this afternoon to watch the final hockey game of the regular season.   Sadly, The Chicago Blackhawks had a near miss at a guaranteed playoff spot with a 4-3 loss to Detroit.   Luckily Dallas lost, so we squeaked into the quarter finals and will play top seated Vancouver.


The rest of us watched the first two hockey periods, then played in the pools and hot tubs and hit up the ice cream sundae bar.    Mmmmm.   Chocolate ice cream with chocolate sauce, chocolate chips, M & Ms and gummy worms, all topped off with whipped cream... We must be on vacation! 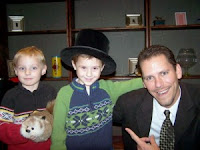 photo from Christopher Tracy's site
Last night we saw a fun magic show by Christopher Tracy.   He's retooling his site with hopes to make the upgrades magically appear by the end of April.   You can check him out and find out where to stalk him in socially approved manners like FB and Twitter HERE.   This is the new site.

This 20 year veteran of family magic gets it.   For every kid in the audience, there's a parent or two lurking around, and they appreciate shows that aren't too cutsie or dumbed down.   Tracy has a quirky edge and aims some of his comedy right at those parents, while keeping the magic highly interactive for the kids.


After the show, he ran a small, "magic school" for kids, where he revealed a few tricks of the trade for $5 toward the room rental.   The kids got to take home a mysterious envelope marked top secret, which contained their very own set of 4 magic cards.    Du-Jay stayed and was thrilled with his new found magical powers, gracing us with mini magic shows all evening, and embellishing and inventing his own tricks.


Christopher Tracy's magic was quite sophisticated and good, and I really liked the guy's stage presence.   I liked him even more when I read his Facebook "General Description" where he describes himself as "Turning tricks for fun and profit!"   Ha!   Can't beat a magician with a dark sense of humor.    He's got a pretty sweet gig, rotating nights at a number of Orlando resorts, so if you live near here or are vacationing down this way, check out his show. 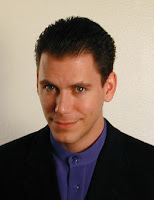 Email ThisBlogThis!Share to TwitterShare to FacebookShare to Pinterest
Labels: Orlando 2011