Humanities Festival
"An Evening of Modern Fairy Tales" Thursday, April 7; 6:00 pm at the Harold Washington Library Center.
No shows seats open up at 10 minutes till showtime. 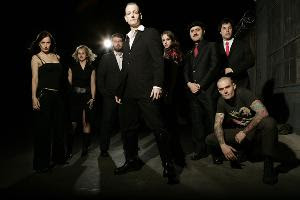 
Reggies says:
The World / Inferno Friendship Society is one band that might actually be worthy of being called a "society." Consisting of 13 members, recruited from a dream list of "everyone who you never thought would make an album together" (the most peculiar listings from their resume include former members of Blues Traveler, Dexy's Midnight Runners and the NFL's Atlanta Falcons' Half Time Marching Band), the World / Inferno Friendship Society plays every instrument known to man, and has dabbled in every musical genre you could name on a bet. Now this Music Theory class on wheels graces us with a sound that is too out there to be everyday pop, rock, ska, dance, or salsa (even though it sounds like all these), but is too goofy to qualify as serious prog-rock.
Posted by Bonnie Kenaz-Mara at 4:25 PM

Email ThisBlogThis!Share to TwitterShare to FacebookShare to Pinterest
Labels: look for ChiIL Mama