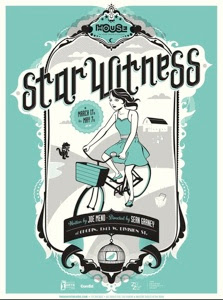 Chicago always has too many great choices for theatre.   Here are our two top choices of the week for a parent's night out.    We had a chance to see both and highly recommend checking them out before they end.
Star Witness at The House Theatre
I can honestly say I've never been to a show before this one, that moved the audience for a scene change, instead of the sets.    This show takes place in not one, but two theatres in the basement space at The House.   It begins with a small town kitchen scene, played out a theatre in the round, in The House's intimate Parlour space.   Then there's the swap and woods beyond, that require a journey from the audience as well as the main character.
The creative minds at The House impressed me at the door with a retro-art program that unfolds into a playable board game.   They even included game pieces and a red die for everyone.   It's unique touches like this that make The House Theatre stand out in a town brimming with great productions.
This mystery is loads of fun, with nods to Oz, ruby cowboy boots, a mad escape by bike, and quirky characters like a swap creature and a one armed man.   Star Witness ends May 7th, so catch it while you can.
March 27th, 2011 to May 7th, 2011
Written by Joe Meno
Directed by Sean Graney
A small town mystery. A girl gone missing. A police scanner with no answers. Star Witness is the story of Shelley, a nineteen-year-old waitress in the tiny town of Somerset, IL, hoping for something, anything to surprise her. When a local child disappears, Shelley and her foster grandmother Hazel steel themselves beside the police scanner, hoping for good news. But as tragedy begins to cloud the town, Shelley desperately searches the unfamiliar night for a glimpse of something that has kept its wonder. Sean Graney (Artistic Director and Founder of The Hypocrites) directs this latest collaboration with Chicago novelist Joe Meno (The Boy Detective Fails).
RUNNING: March 17 -May 07, 2011
SHOWTIMES: Thursdays → Saturdays at 7:30 pm, Sundays at 3:00 pm
LOCATION: The Chopin Theatre Downstairs Theatre
1543 W. Division St., Chicago, IL
TICKETS: $25 BUY NOW or by phone at 773.769.3832
$10 Student and Industry rush tickets available at all performances pending availability one prior to curtain at the box office window.
Working at Broadway Playhouse at Watertower Place
I've always been a fan of Studs Terkel and consider him a Chicago treasure.   So it was a pleasure to see this celebration of everyday people in all walks of life, based on his interviews.
If you're thinking of bringing the family, there is some language and a prostitute who is pretty candid about her line of work, but the bulk of the show is pretty appropriate for all ages.    We highly recommend checking out Working before the end of their run, June 19th.
I also had a chance to stay after the show for a Terkel style "talk back".   There are a number of these scheduled throughout the run and it was well worth sticking around for. 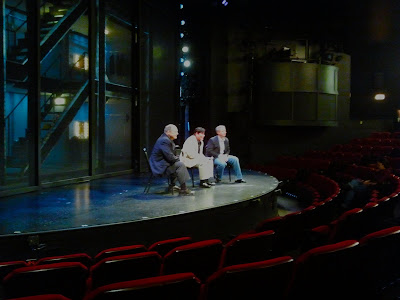 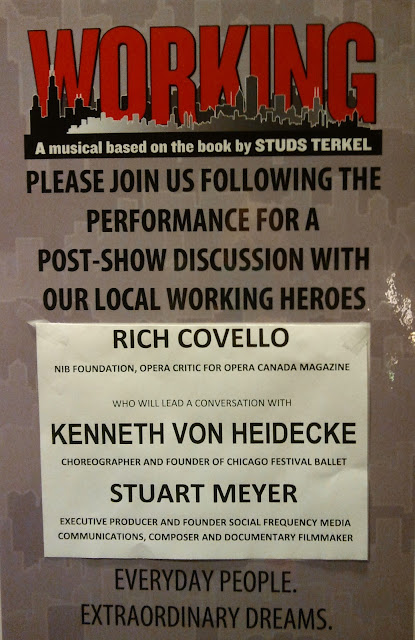 Learn about the WORKING Local Heroes program.
Click here!
"HIGHLY RECOMMENDED!"
-Hedy Weiss, Chicago Sun-Times
"REMARKABLE! *** 1/2 stars (out of 4)"
-Chris Jones, Chicago Tribune
WORKING is a vital new musical based on the book by Pulitzer Prize-winning author and Chicago’s own Studs Terkel. Adapted by Stephen Schwartz (WICKED, PIPPIN and GODSPELL) from the original adaptation by Stephen Schwartz and Nina Faso, WORKING is the working man’s A CHORUS LINE. A musical exploration of 26 people from all walks of life, with songs by all-star composers Craig Carnelia, Micki Grant, Tony Award™ winning Lin-Manuel Miranda, Mary Rodgers, Susan Birkenhead, Stephen Schwartz and Grammy Award™ winning James Taylor. WORKING celebrates everyday people in a genuinely funny and touching way, portrayed by some of Chicago’s brightest stars including E. Faye Butler, Barbara Robertson, Gene Weygandt, Emjoy Gavino, Michael Mahler and Gabriel Ruiz. WORKING fills you with hope and inspiration and is the perfect musical for everyone who has ever worked a day in their lives.
Did you all watch 190North on February 19? If not, click here to get a behind-the-scenes look at this musical!
Performances run through Sunday, June 19.
Ticket prices are $67.50 to $77.50.
GROUPS OF 15 OR MORE ON SALE NOW!
CALL (312) 977-1710
Here's the official Working website.   Check it out for detailed show info.   Check out Broadway in Chicago for tickets.
Posted by Bonnie Kenaz-Mara at 5:10 PM