We'll Have A Little Girl And We'll Name Her Minnie Pearl... 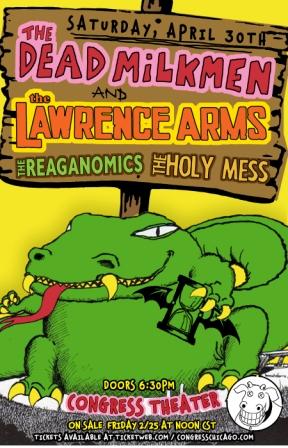 We can't wait to check out The Dead Milkmen at Congress Theater the last day of this month.   They're Sagezilla's favorite band.    She's made herself two DIY Dead Milkmen shirts that she wore to Lollapalooza.   One says I'm Minnie Pearl in silkscreen and has zippers glued all over it and the x eyed cow logo.   The other is a giant photo transfer of her face and an ice cream and says ....eating fudge banana swirl...just you and me punk rock girl.    She loves those shirts and wears 'em everywhere, while she belts out Dead Milkmen classics like "I don't wanna be on the beach." 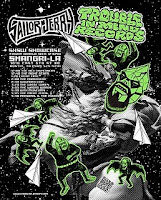 Our punk rock librarian friend, Lisa, heard Sagezilla singing The Dead Milkmen's Punk Rock Girl in the Logan library once and instead of shushing her she smiled.    Then she told us that was the first song she learned to play on guitar.    Many punk rock girls who grew up on these tunes have since had little girls, traveled round the world, and are now punk rock mamas.
Librarian Lisa's one of 'em.   She's now involved with Chicago record label, Trouble in Mind and has had a few bands and a baby girl of her own (not named Minnie Pearl).    She even opened for the band, X, as guitar player for her band CoCoComa.    You can check out her label's blog HERE.    Trouble in Mind just rocked SXSW and we can't wait to see their bands coming through Chi Town.
Check out The Dead Milkmen live at Congress Theater with your punk kin and check out their web site for a printable PUNK ROCK GIRL PAPER DOLL!

We gave away this paper doll to promote the Punk Rock Girl single in 1988. You can get yours by clicking here. A new browser window will open, and you can then print out an 8 1/2 x 11" copy to cut, color and play with. 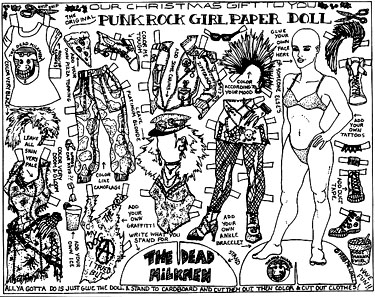 In 2009, Riot Fest brought The Dead Milkmen back to Chicago for two ferocious shows. Their stellar performances made them one of the most talked about bands of the festival; the Windy Citizen reported, “Recently reunited punk rock veterans The Dead Milkmen haven’t lost anything in the way of skill, enthusiasm or irreverence in the 14 years since their breakup.”
Riot Fest brings them back to play the Congress Theater on Saturday, April 30th with the Lawrence Arms, the Reaganomics and the Holy Mess on board. Tickets are available at www.congresschicago.com at the very low price of $18.00.
The Dead Milkmen formed in 1983 in Philadelphia, Pennsylvania. They initially consisted of vocalist and keyboardist Rodney Linderman ("Rodney Anonymous"), guitarist and vocalist Joe Genaro ("Joe Jack Talcum"), bassist Dave Schulthise ("Dave Blood") and Dean Sabatino ("Dean Clean").
Beginning within the local underground hardcore scene of the early 1980s, the band established their jangly punk sound, which they coupled with prominent humor delivered in heavy Philadelphia accents. After garnering an underground following through extensive touring and college radio attention, they enjoyed international success on the strength of 1988's "Punk Rock Girl", a single from their Beelzebubba album which entered into MTV rotation.
Health problems and an ill-fated stint with the major label Hollywood Records in the wake of their success led to the group's 1995 breakup. In total, they issued eight studio albums, one live record, and numerous peripheral releases before disbanding.
In 2008, the group reunited and began working on new material, with new bassist Dan Stevens replacing the deceased Schulthise.
The band will release a new album in 2011, their first in 16 years. 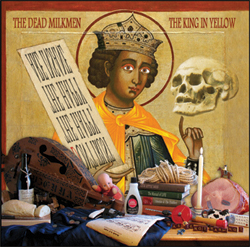 Posted by Bonnie Kenaz-Mara at 6:54 PM