Win A Disc Wednesdays: Countdown to Kidzapalooza With Recess Monkey The Final Funktier 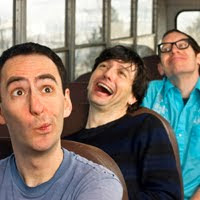 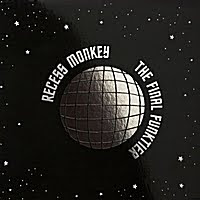 Wednesday is back
with the Kidzapalooza
line up count down.

First up, we're thrilled to give away the latest disc by funky favs, Recess Monkey.   This disc is hot off the presses--just released June 15th.


These guys are truly fun.   If you enjoy The Beatles and They Might Be Giants, this CD might just rock your moon boots off.  Sagezilla and Du-Jay both gave it their smack of approval.   They especially enjoyed Beat-Box-a-Robot, but all 15 tracks are upbeat, creative and ripe for silly dancing.


Enter here to win your very own copy of Recess Monkey: The Final Funktier


Entries accepted from 7/14 through midnight 7/20.   ChiIL Mama's Win-A-Disc-Wednesday Winner will be announced Wednesday, July 21st.   We will publish the winning family's name and favorite music, but contact information remains private and will not be sold, shared or printed on the bathroom wall.

Check them out live, cause
Recess Monkey is comin' to
Chi Town to play Kidzapalooza.


Friday, August 6 at 4:00 p.m. and
Sunday, August 8 at 1:30 p.m.
The critically acclaimed, award-winning trio of Seattle schoolteachers, Recess Monkey,
is in love with Chicago!  Following two July shows at Taste of Chicago, Recess Monkey will return for two special performances  at Kidzapalooza

“RECESS MONKEY:  If Seattle is the new bastion of kindie rockers, then the trio of elementary school teachers — Jack Forman, Daron Henry and Drew Holloway — are the city's breakout stars.” –  Time Magazine
“BEST KIDS’ CDs OF THE DECADE:  With five great albums released in the past four years, this trio of Seattle teachers (who have even garnered Beatles comparisons) has become a force to be reckoned with in children's music.”
– Christopher Healy, AOL ParentDish“Dan Zanes may be the godfather; They Might Be Giants, the legitimizer; and Laurie Berkner, Ralph Covert, and Justin Roberts the genre's superstars.
But Recess Monkey  is the heart of kids’ music today.” –  Stefan Shepherd, Zooglobble

Recess Monkey’s live shows are Beatles-influenced sing-alongs about friends, animals and SL-DOUBLE-E-P-OVERS. The band’s Kidzapalooza performances will be foot-stomping, hand-clapping, chicken-dancing romps through old favorites along with high-energy funk and new wave grooves from their newest album, The Final Funktier, including “Booster Seat,” which compares a booster seat to a booster rocket, a low-gravity, high-bounce dance song called “Moon Boots,” and even a tune about a ukulele-playing alien called “Ukulalien.”  Kids and their parental units will zoom around the room with the high-energy “Jet Pack,” join the Monkey Bar conga line (located everywhere), take a soapy ride at the Bubble Factory, and give that loose tooth an extra jiggle with Dr. Wiggle.

Contrary to popular belief, Recess Monkey was not pieced together, audition-style, a là The Monkees.  The band emerged from a meeting of three like-minded teachers -- Jack Forman, Daron Henry, and Drew Holloway -- who had a passion for sharing the stories of the kids they taught, and still teach, through music heavily influenced by their early record collections.

Drew Holloway describes Recess Monkey as “six-year-olds trapped inside thirty, or er, a forty-something bodies. It’s  kind of like the movie Big, just with more guitar solos… Okay we don’t have guitar solos, but our bassist Jack leads a pretty sweet Monkey Bar conga line. And we all have disco pants! Nothing says recess like disco pants!”

Holloway continues, “Our musical influences are anything and everything.  We have our favorites for sure, both classic and contemporary, from Beatles to Beach Boys, Disco to Devo.  We’re so excited to play at Kidzapalooza this summer and catch some amazing family acts, as well as some of our favorite bands like Spoon and Arcade Fire. Over the years we’ve been compared to other bands, but it feels like we’ve really begun to hit our stride with a sound that’s all our own!”
Recess Monkey’s 2009 Release, Field Trip, was named to the American Library Association’s Notable Children’s Recording List, and the album was included among USA Today’s “Favorite Releases of 2009.”  Enthused Cookie magazine, ”How does this prolific trio keep on getting better? Its fifth album somehow manages to top the rest.” Time Out NY Kids declared Field Trip to be the #1 CD of the year, calling it “pure genius.”
Recess Monkey’s Tabby Road, released in 2008, was a Parenting magazine “Our Fave This Month,” a KIWI magazine “Best of 2008,” and was one of the Christian Science Monitor’s Top Stocking Stuffers in its “Best of 2008 Holiday Gift Guide.”

According to kids’ music authority Stefan Shepherd (Zooglobble), Recess Monkey’s 2007 album, Wonderstuff, (a pioneering two-CD set written and performed by Recess Monkey and over 100 creative young music- and animal-loving friends), is “the best pop-rock musical since Tommy” and was “the year’s most ambitious kids’ music album.” Shepherd declared, “Recess Monkey has slowly staked its claim to being the best kids’ music band in the business.”


Recess Monkey is the acclaimed children’s music band from Seattle, WA!
...three elementary school teachers who make kid's music that grows out of their days in their classrooms. They continue to be praised across the country for singable, dancable songs that parents enjoy as much as their kids. MIndy Thomas from SiriusXM's Kids Place Live says, "These guys are able to tap into elementary school so well that it’s like they never left. In this never-ending nationwide talent show of kid and family music, they are most definitely at the top." Says Stefan Shepherd of Zooglobble.com, "Recess Monkey just keeps turning out album after album with pop nuggets, as if we'd just discovered that the Beatles had recorded a ton of kids music 40+ years ago." Cookie Magazine says, "This Seattle trio knows how to get kids excited." This children's music band isn't just for kids! 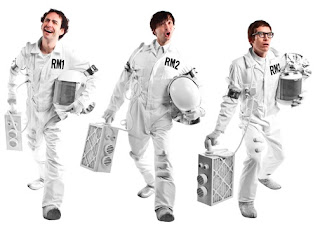 Posted by Bonnie Kenaz-Mara at 3:57 PM