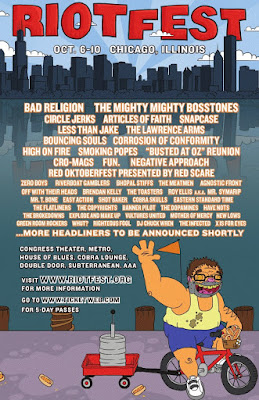 With Lollapalooza still looming, it's hard to think ahead to fall and Riot Fest.   But....it's time for ChiIL Mama to give you a cyber poke with a safety pin and remind you punk slackers to get off the couch and get your pre-sale and early passes locked down.


Early-bird 5 Day passes at the low early bird price of 115.00 for 17 shows – are available now and almost sold out.  Limited quantities available, first come, first serve.
All Riot Fest tickets, including 3 day passes and single days, are now on sale as of Saturday, July 17th. For more information, visit www.riotfest.org. Fans can sign up for the Riot Fest announcements to receive early info on secret shows and special deals. To purchase tickets visit TicketWeb:

Hey guys, we just want to let you know that individual show tickets and three day passes will be on sale next week.  Keep checking back to RiotFest.org for information and while you're at it, check out both of our current contests for chances to win five day passes good for all 21 shows.  As you can probably guess there's still plenty of stuff up our collective sleeves.
Riot Fest 2010 Announces Bad Religion, The Mighty Mighty Bosstones, Circle Jerks, Articles of Faith, Snapcase, Less Than Jake,
“Busted at Oz” Reunion, The Lawrence Arms, Corrosion of Conformity, Negative Approach, Smoking Popes, Cro-Mags, High On Fire & Dozens More Bands to Rock Chicago October 6-10th
“…Riot Fest, Chicago's multi-band, multi-date, multi-venue celebration of the punk underground past, present and future, is incontrovertibly one of the premier gatherings of its kind in the U.S., if not the world.” Jim Derogatis, Chicago Sun Times


Riot Fest announces the largest punk festival yet, set for October 6-10, 2010 in Chicago.


A full listing of announced bands is available at www.riotfest.org.


Fans should be ready for new announcements of another batch of heavyweight bands in the coming weeks – Riot Fest is by no means done announcing major additions to this hoard of punk stars.


Riot Fest is revered for reuniting classic bands from years past (last year the UK’s Cock Sparrer  electrified audiences in two sold out shows). This year is no exception. Snapcase plays their first show outside their hometown of Buffalo in years, Articles of Faith play with their original line-up for the first time in 25 years, Bhopal Stiffs reunite for one Riot Fest show only, New York crossover giants Cro-mags return and Negative Approach play a rare show. Corrosion of Conformity will return for their first show with the original three-piece “Animosity”-era line up of Mike Dean, Reed Mullin and Woody Weatherman, performing songs from “Animosity” and “Technocracy”.


An extraordinary array of punk bands will take the stages at Congress Theater, Metro, House of Blues, Double Door and Subterranean. There will 17 shows over five venues (not including secret shows), making 5 day passes extraordinarily economical. With more headliners than ever before, Riot Fest saw the need to make traversing the city easier and answered the call – 2010 will find shuttle buses running from Cobra Lounge (there is ample free parking nearby) to each venue and back, where rumor has it that late-night free shows will be going down. A series of official Riot Fest secret shows will be announced via RiotFest.org; they’ll take place undisclosed locations over the summer and fall.


Now in its sixth year, Riot Fest has come a long way in a very short time. When Mike Petryshyn launched Riot Fest in 2005, only two of the bands he really wanted to play agreed to do so. In the first five years, 25,000 fans have attended to see over 200 bands.


So, don't wait till October, 'cause the smaller venues sell out.    Show your punk kin that you still know how to rock.   Get your tickets today.

Posted by Bonnie Kenaz-Mara at 3:28 PM