Journey to the Center of the Uterus 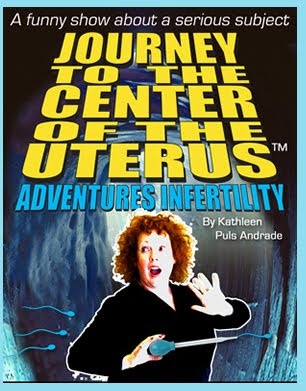 Kathleen Puls Andrade may not be able to give birth to a baby, but she has given birth to a poignant, personal piece of theater that had everyone in the audience cracking up.     Journey to the Center of the Uterus was at once enlightening, educational and entertaining.    As infertility rates are growing exponentially, everyone will know someone sooner or later, who is going through this particular ordeal.   And the themes of  frustration, addiction to hope, and harm done by well meaning friends and strangers are universal.

Like any baby, this play had an excellent birthing team in place.  Marshall Stern wrote the musical numbers, including the hilarious "Hoo Haw Highway".   He's a talented musician and actor in his own right, with 38 years in the industry and an impressive resume including  Second City directing expertise and Nashville recording credits. 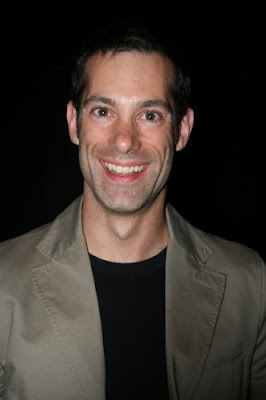 Andrew Eninger directed the play and created all the animated shorts. 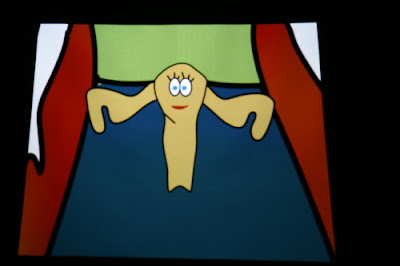 They included chuckle inducing instructional videos and live interviews of other infertile couples.   The cartoon clips were brilliantly funny and added another dimension to the show. 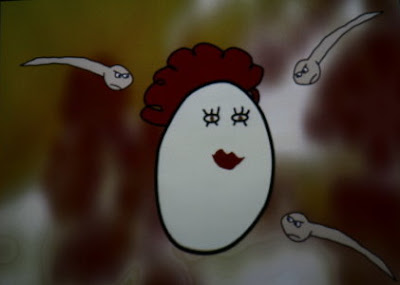 He also shot the goofy, great poster picture.   Andy's a talented actor, teacher and director who has worked for years with Second City and Gayco.   Finally,    he's the mastermind behind the critically-acclaimed, improvised solo performance piece, Sybil. 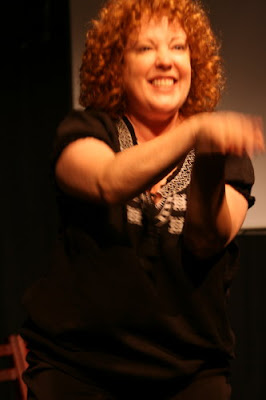 Kathleen Puls Andrade is also no stranger to the stage.   She's been an actor, improviser, voiceover, writer and teacher in Chicago for several years. Currently she can be seen in Put the Nuns in Charge!, the hilarious long running sequel to Late Nite Catechism at the Royal George Theatre in Chicago.

Kathleen has a great sense of humor and a talent for observing the little details and nuances of human behavior and idiocy, that make for great theater.   She's brutally honest, even when it's a bit self deprecating.   And she finds the funny side of painful, embarrassing and heart breaking situations. 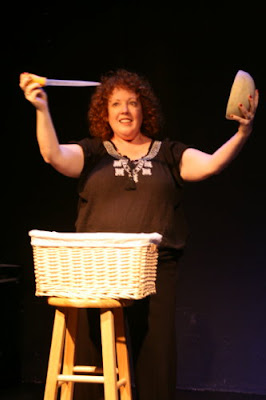 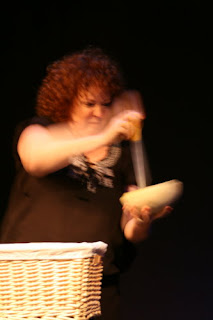 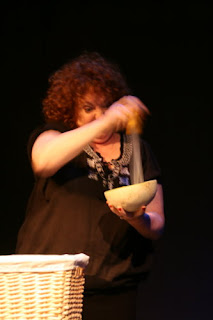 Cathartic was a word bandied about a lot in the post play discussion.   Kathleen worked on "birthing" her play for nearly a year.   The humor, laughter and absurdity that evolved while she workshopped and rehearsed, were invaluable tools for growing past the pain and disappointment.

At some of the most intimate points, the stage lights caught tears still glinting in her eyes, and she admitted that sometimes performing the play brings back the anguish as she relives it.   At the most heart wrenching parts, much of the audience teared up as well.

But Journey to the Center of the Uterus is no longer just Kathleen's personal journey, since she has chosen to share her experience as a public performance.  Now her work can be cathartic for those who have been through a similar ordeal, who don't have Kathleen's talent for words and performance.   It can be enlightening for well meaning family, friends and co-workers who have inadvertantly made a tough time worse for some couples.   In this respect, Kathleen has truly shared a gift. 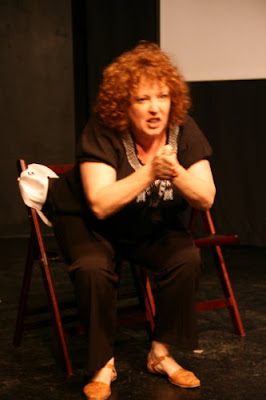 This is one funny and important play, not to be missed.   Journey to the Center of the Uterus is playing at The Greenhouse Theater Center on Wednesdays at 8pm and Sundays at 7pm through October 28th.   And four additional shows have just been added on Saturday, October 3rd and 10th at 8pm and a Sunday Matinee, October 4th and 11th at 3pm. 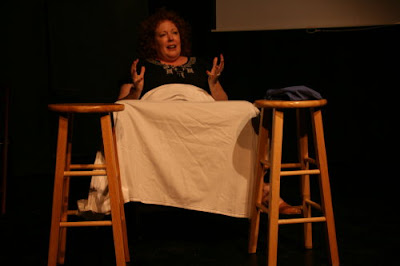 Email ThisBlogThis!Share to TwitterShare to FacebookShare to Pinterest
Labels: Journey to the Center of the Uterus