Chicagoland Car Free Day-- EL of a Lot of Fun! 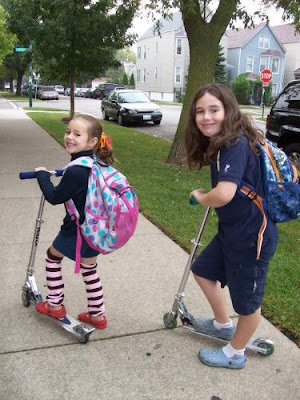 ChiIL Mama successfully negotiated the auto ban for September 22nd.   And we had a blast, getting to and from school car free.   Between Razor Scooters and the Blue Line El trains, our commute was pretty easy.   And the kids thought it was all a grand adventure. 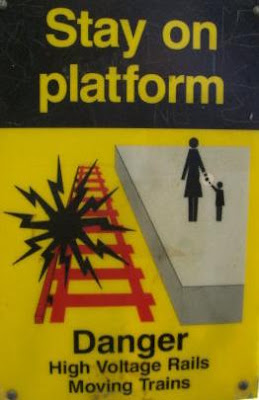 Du sat next to an artist on the el, who was sketching away on his pad.   When he noticed the kids' peering at his work, he stopped and gave a mini art lesson about the horizon line and geometry and perspective in art.
What a great bonus!   Du acknowledged that he knew about horizon lines and used them in his own art, and he held his own in conversation. 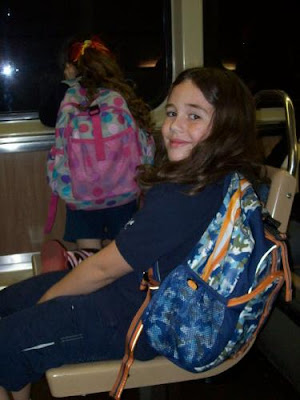 It was so much easier to notice oddities and interesting things, when we're not zipping past in the car.   Here are some of our favorites:

A neon orange cow and star gazing-astronomer bovine with a telescope........chalk drawing characters on the Damen platform........cool spiral art of the Chi skyline and poetry in the Damen station........ yin/yang front door knobs below a tranquil wooden landscape......and multicolored fall leaves crunching beneith the Razor wheels.

I'm all for honing the kids' powers of observation and appreciation of the quirky.    Those are useful skills for artists and writers, or whatever they end up growing up to be.    More than that, it's just plain FUN.

We are veterins at taking the trains downtown, and frequently ride to fests and museums that way to avoid exorbitant downtown parking fees and traffic jams.   But this was only the second time we've attempted it for the 3 mile school day commute.   We left oodles of extra time, unsure of how long it would actually take, and we arrived 40 minutes before the school day!   This left plenty of playground time and we even ducked in to the lunchroom for a free breakfast.

Unfortunately, the trip took an hour each way, versus 10 minutes and cost us nearly $14--an excellent argument for the need for cheap, rapid transit in the biggest cities.    By the time I took the kids there, returned, went to get them, and returned with them, I'd spent over 3.5 hours enroute!   Otherwise we'd do it much more often.   But, it's good to know we can if we have to.     Now for those bike skills........... 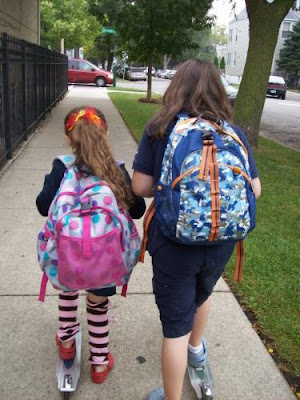