All ChiIL No Mama


I love being a Mom.   Sure, it's exhausting and sometimes annoying to have to be referee, doctor, psychologist, event planner, chauffeur, tutor, cook, housekeeper, pet wrangler, and finder of lost objects.   And everyone needs a day off every once in a while, even from a job they love.   This is even more necessary when the job lasts 24/7 for around 18 years per child, and to some extent, for the rest of your life!
“Making the decision to have a child is momentous. It is to decide forever to have your heart go walking around outside your body.”  Elizabeth Stone


I remember getting a card with that quote on it, shortly after the birth of our son.   It kind of freaked me out.   Parenting is not a job you can quit or even easily take a break from.    But, fortunately it can be shared  with friends and relatives, sometimes!    My parents came through town after an ambitious Amtrak journey to Glacier National Park, Portland and back to Chicago.   They picked up their car and my 2 kids and drove back to Ohio, leaving me with 5 kid-free days before I have to go retrieve them.

The weekend was great!   My husband and I had a cozy night at home watching kid inappropriate movies after he'd been out of town four days.   The second night, we went out to eat with friends and saw one of our favorite bands, Clutch, at Metro.   We stayed out past 1AM without worrying about a sitter or having small people jump on our heads at 7AM.   Then he had to go back out of town, leaving me with the stark realization that all my friends have kids and/or early day jobs and can no longer go out on weeknights. 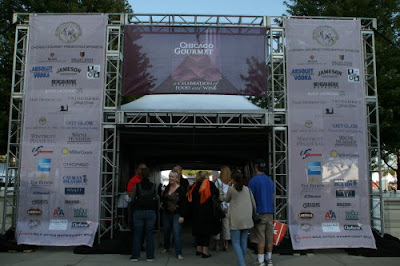 Sunday afternoon, I went to the Chicago Gourmet Food show in Millennium Park, alone.   Thanks for the wristband, Anna!   I couldn't go till 4pm,  the final hour, and everyone had been drinking since noon.   The people watching was hilarious.   Rumor is, people were passing out last year, so they put food in every tent this time.

When I first arrived, I stood next to a beautiful African American woman with a bunch of little braids piled on her head.   She was swaying a bit and laughing a lot.   "All behavior is excused," she laughed, "You know.   On account of all the free wine and all."   But other than a lot of laughter and some bad dancing, I didn't see any fighting or wildly inappropriate behavior.    Despite sighting a  few drunken long haired boys, I behaved myself, too, honey, and didn't even flirt. 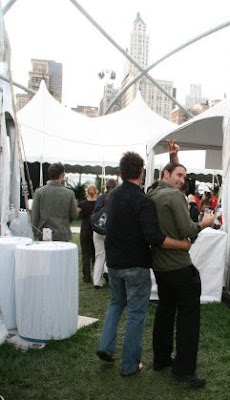 The lines were down by 4, so I got to sample a good variety of food and drinks.   Some of the booths got creative, like this 1950's school theme. 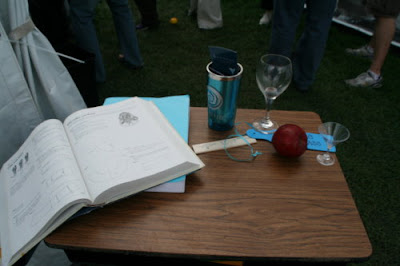 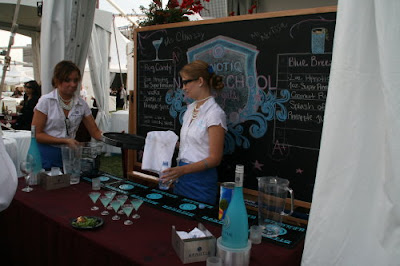 And the mystery of the elegant velvet balls was revealed.   What appeared to be expensive mod chairs, were really cleverly covered giant exercise balls. 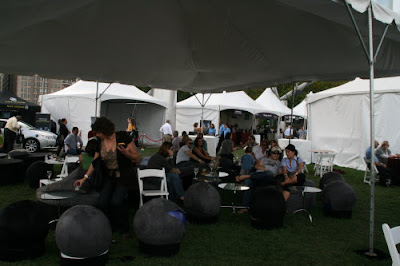 Excellent food and drinks were plentiful, though I went easy on all the shots and great wines, since I had a play to review in 2 hours and had driven downtown.    I did have two great shots at the Patron booth, and brought home the recipes.   I'd definitely go again next year, given the chance. 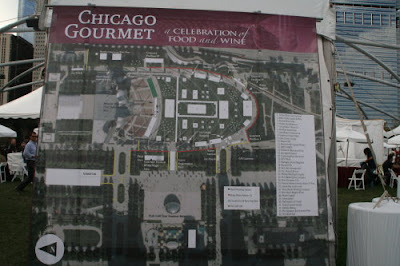 My friend, Alicia, came out to see Journey to the Center of the Uterus with me, and have drinks at Delilah's Sunday night.   I'll post a full review of the hilarious play tomorrow.   We had a great time, but it turned into another 1AM night, and she had to get up in a few hours to take her kids to school and sitters and go build prosthetic limbs.   Yay, Super Mama Alicia.

Monday, I tried to drag out everyone I know, without luck.   So, I ended up staying home and relaxing--eating ice cream and watching non animated, grown up movies I never have time for.   But it's such a rare event for me to be able to get out these days, I don't want to waste the opportunity.   On the other hand, it's just not that much fun going out solo.....

Today I have a bunch of mundane errands to run, then plan to treat myself to a couple R rated movies in an

I miss the kidlets, but it's great to have a hand full of days where I can actually sleep in and don't need to take care of anyone else, or listen to arguments.   I'll be recharged and ready for the Mama marathon in another day.   I haven't laughed nearly as much as usual these past 5 days, and a house can be too quiet........
Posted by Bonnie Kenaz-Mara at 1:00 PM