**This production is recommended for adults
& those ages 11 years old and older.** 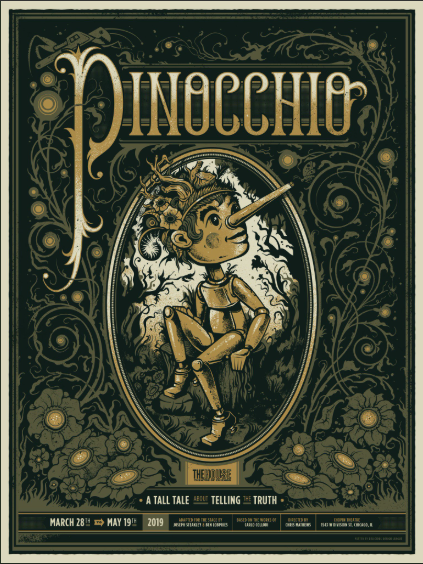 Enter Below for your chance to WIN a pair of tickets to The House Theatre's Pinocchio!
(2 winners/$100 value a pair)
*Winners' choice of any date/time within the first two weeks of performances after opening (April 11-21 excluding April 14).

The Classic Tale of a Wooden Boy Will Be Brought To Life Through the Direction and Adaption of Company Members Chris Mathews, Joseph Steakley, and Ben Lobpries


I'll be ChiILin' with The House Theatre of Chicago at the Pinocchio press opening April 7th with the whole family. We can't wait to see their unique take on this classic. Enter our giveaway through 3/31/19 and check back after 4/7/19 for my full review. Our 2 winners will be announced on April Fools Day, no lyin'.

The House Theatre of Chicago continues their 2018 -2019 season with the beloved tale of Pinocchio at The Chopin Theatre upstairs theatre, 1543 W. Division, March 28 – May 19. This world premiere of the classic story inspired by the works of Carlo Collodi has been adapted for the stage by Company Members Joseph Steakley and Ben Lobpries. The House Theatre of Chicago’s rendition of Pinocchio features the direction of Company Member Chris Mathews. Previews take place Thursday, March 28 at 8 p.m., Saturday, March 30 at 8 p.m., Sunday, March 31 at 7 p.m., Thursday, April 4 at 8 p.m., Friday, April 5 at 8 p.m.

The regular performance schedule is Thursdays - Saturdays at 8 p.m. and Sundays at 3 p.m. Preview tickets are $20 with regular run tickets $30 – $50. Student and industry same-day discounted tickets are available for $20 for all dates, based on availability. Tickets may be purchased by calling 773.769.3832 or by visiting www.thehousetheatre.com.

The House brings to life this tall tale about telling the truth. Carved from an enchanted stump in a charred forest, toyshop owner Geppeto's small puppet child flourishes. The growing Pinocchio devours books and the complex worlds they reveal. He relishes musicals and the emotional ride they offer. And he longs to sink his adolescent teeth into real relationships and conversations beyond the walls of his storefront home. But his protective father keeps Pinocchio's wild branches trimmed back, and forbids venturing out. A method sure to inspire rebellion in this precocious, curious not-quite-real young man.

Pinocchio will be portrayed by a Bunraku-style puppet, created and crafted by Tom Lee of Chicago Puppet Studios.

Funny, imaginative, and moving, Pinocchio explores how the lies we tell ourselves hurt those we love. 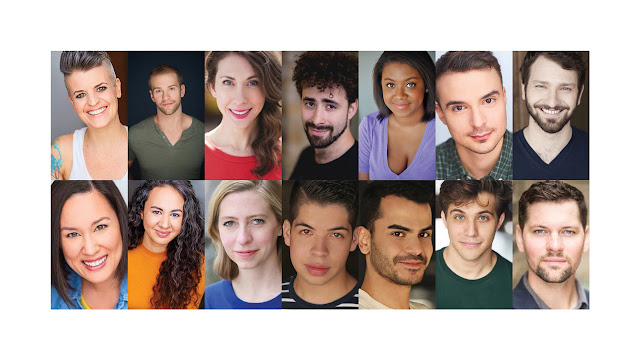 The cast of Pinocchio features guest artist Sean Garratt, voicing and puppeteering PINOCCHIO. Garratt is a UK-born artist and was a co-deviser and puppeteer on multi-award-winning show The Table (Blind Summit) which appeared at Chicago Shakespeare Theatre in 2015 and has toured to over 25 countries.

+Company Member of The House Theatre of Chicago

Chris Mathews joined The House as a Company Member in 2002 after performing in their second show as “Curly” in The Terrible Tragedy of Peter Pan. In the time since he has served as a performer, playwright, dramaturg, carpenter, prop builder, grant writer, floor sweeper, water torture cell escape coach and every little thing in between. With fellow Company Members Jake Minton and Nathan Allen, Mathews has co-written Dave DaVinci Saves the Universe (Jeff Nomination New Work), The Sparrow (Jeff Award New Work), Rose and the Rime, and The Hammer Trinity. He served as the Director for The Nutcracker in 2017 and works regularly developing new works with Barrel of Monkeys and The Actor’s Gymnasium.

Joseph Steakley is a proud company member of The House and has been performing with them for 15 years. His acting credits include The Hammer Trinity, The Nutcracker, and The Great And Terrible Wizard of Oz. Pinocchio marks his first project as a writer, and he could not be more excited to share this story.

Ben Lobpries became a company member with The House in 2002 and appeared on stage in several early productions (most notably as “the gay cowboy” in San Valentino and the Melancholy Kid).  Since then he’s been working primarily as a writer.  Six of his plays have been produced in both Dallas and Chicago, and readings of his fiction have been performed in and around Boston.  He holds a BFA in Theatre Studies from Southern Methodist University and an MFA in Creative Writing from Emerson College.  Currently, he teaches in the First-Year Writing Program at DePaul University and lives with the hipsters in Logan Square.

Garratt is a classically and contemporary trained actor who specializes in puppetry, voice, and improvisation and is originally from the UK.  He is most renowned for the award-winning puppet show The Table by BlindSummit Theatre, which he co-devised and starred in and which has been touring for five years to over 25 different countries, and was seen at Chicago Shakespeare Theatre in 2015.

Garratt has also worked with the National Theatre of Scotland, The Globe Theatre, Improbable Theatre, Familia del a Noche, and puppeteered at the world famous Bregenz Festival and the London 2012 Olympic Opening Ceremony. His credits in Chicago include Pug Cup with Nickelodeon, The Table with BlindSummit Theatre at Chicago Shakespeare Theatre, Rita at Chicago Opera Theatre, and most recently Atalanta helmed by Leslie Buxbaum Danzig and Jessica Thebus at the 2019 Chicago International Puppet Theatre Festival. 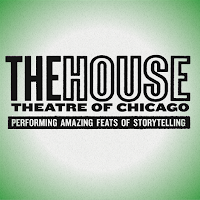 The House was founded in 2001 by a group of friends to explore connections between Community and Storytelling through a unique theatrical experience. Since becoming eligible in 2004, The House has won 23 Joseph Jefferson Awards, became the first recipient of Broadway in Chicago’s Emerging Theater Award in 2007, and was awarded a 2014 National Theatre Company Grant by the American Theatre Wing, founder of the Tony Awards. The 17th season of original work is underway and The House will continue its mission to unite Chicago in the spirit of Community through amazing feats of Storytelling.

Enter HERE for your chance to WIN
a pair of tickets to The House Theatre's Pinocchio! (2 winners/$100 value a pair)
*Winners' choice of any date/time within the first two weeks of performances after opening (April 11-21 excluding April 14).

Enter through midnight 3/31/19. Winner will be emailed and announced here and on our social media networks on April Fools Day... no lyin'.

Disclosure: It's been our pleasure to partner up with House Theatre on giveaways for our readers for years. They have given us complimentary tickets for our giveaway and for review purposes. As always, all opinions are my own.