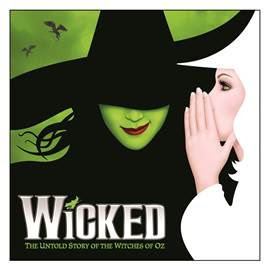 Want to catch Broadway In Chicago's WICKED without breaking the bank? My family entered this lottery a few years back and WON 2 pairs of front row tickets for $25 a seat (cash only)! So it is doable. Chances of being picked of course depend on turnout for any given show, but you've gotta be in it to win it, and it certainly doesn't hurt to try. Ticket lottery is free to enter.

Broadway In Chicago is delighted to announce that a WICKED day-of-show drawing for a limited number of seats will take place inside Block 37. Throughout the run of the show on each performance day, people can pick up entry forms at the Block 37 guest services booth during business hours up until two hours prior to the performance. Entry forms are placed into the WICKED hat, one entry per person. Names will be drawn two hours before each performance for twenty seats at $25 each, cash only.

This drawing is available only in-person at Block 37 with a limit of two tickets per person. Drawing participants must have a valid photo ID when submitting their entry form and, if chosen, when purchasing tickets. Block 37 is located at 108 N. State across from the Oriental Theatre (24 W. Randolph). Chicago’s most popular musical will return to Broadway In Chicago’s Oriental Theatre during the holiday season for a limited seven-week engagement December 6, 2017 - January 21, 2018.

With music and lyrics by Stephen Schwartz (Pippin, Godspell, Academy Award®-winner for Pocahontas and The Prince of Egypt) and book by Winnie Holzman (“My So Called Life,” “Once And Again” and “thirtysomething”), WICKED is directed by two-time Tony® Award winner Joe Mantello (Take Me Out, Love! Valour! Compassion!, The Vagina Monologues) and features musical staging by Tony® Award winner Wayne Cilento (Aida, The Who’s Tommy, How To Succeed…). The musical is based on the best-selling 1995 novel by Gregory Maguire.

The Broadway sensation, WICKED, looks at what happened in the Land of Oz…but from a different angle.  Long before Dorothy arrives, there is another young woman, born with emerald-green skin, who is smart, fiery, misunderstood, and possessing an extraordinary talent. When she meets a bubbly blonde who is exceptionally popular, their initial rivalry turns into the unlikeliest of friendships…until the world decides to call one “good,” and the other one “wicked.”

With a thrilling score that includes the hits “Defying Gravity,” “Popular” and “For Good,” WICKED has been hailed by The New York Times as “the defining musical of the decade,” and by Time Magazine as “a magical Broadway musical with brains, heart, and courage.”

Winner of over 100 international awards including the Grammy Award and three Tony Awards, WICKED has been performed in over 100 cities in 15 countries around the world (U.S., Canada, United Kingdom, Ireland, Japan, Germany, Holland, Australia, New Zealand, Singapore, South Korea, The Philippines, China, Mexico, and Brazil) and has thus far been translated into six languages: Japanese, German, Dutch, Spanish, Korean, and Portuguese.

TOM McGOWAN (The Wizard). Broadway: Wicked, She Loves Me, Casa Valentina, Chicago, Ivanov, La Bete (Tony and Drama Desk noms.). Off-Broadway: The Food Chain (Obie). West End: Wicked. Television: Uncle Jax on “The Good Fight,” Kenny on “Frasier,” Bernie on “Everybody Loves Raymond,” “Veep,” “Modern Family,” “CSI,” “ER,” “Curb Your Enthusiasm.” Film: Freeheld, The Birdcage, Heavyweights, Ghost World, Bad Santa, As Good As It Gets, Bean, Family Man. M.F.A., Yale. B.F.A., Hofstra. Thanks to daughter, Mary, for introducing him to Wicked when she and her best friend, Sara, spent the entire summer of ’04 playing Glinda and Elphaba in the backyard.

JON ROBERT HALL (Fiyero) is a Los Angeles native. He recently played Tom Chisum in the Emmy Award-winning “Grease: Live!” on Fox, as well as recurring on “Glee.” He also played Stacee Jaxx in the Vegas production of Rock of Ages at the Venetian. In addition, Jon produces music for young social media stars and helps develop them. His company HallPass Productions is an L.A. staple for many of the heavy-hitting kids in the social media world. Go to his website or DM for ways to work with him. Jonroberthall.com. Insta/twitter/Musical.ly: @jonhall28 and @hallpassproductions.

KERRY BLANCHARD (Ensemble) is so happy to be a part of Wicked. Thanks to everyone at Wicked, Telsey and MSA. “All my love to my wonderful family and amazing friends for their never-ending support, love and laughter.”

BEKA BURNHAM (Ensemble, u/s Glinda, Nessarose). Back in Oz! Previously with the com­pany for almost two years. BoCo ’14. “Love and thanks to Craig/Telsey, DGRW, my Wicked fam­ily, Mom and Dad and especially my pup Root.”

LAUREN CANNON (Ensemble). Thrilled to be in Oz! Credits include West Side Story (nat’l/int’l/Ogunquit Playhouse), Radio City Christmas Spectacular and recently seen on the 2016 Tony Awards. “Love to my family.” @L_cannon.

KELLY LAFARGA (Swing) feels honored to join Wicked. Film: Step Up 2: The Streets, Step Up 3D. TV: “Glee,” “Bones,” “How I Met Your Mother,” “DWTS.” Tours: Eve, Donnie Klang. Marymount Manhattan College. Thanks Mom, Nina, and Sasha for their endless love and sup­port. “Dad, I love and miss you always.”

TIFFANY RAE MALLARI (Ensemble) has been lucky to perform for the past 10 years. Some accomplishments include High School Musical 3, Cirque du Soleil’s Viva! Elvis and Disneyland’s California Adventure.